After days of festivities, Walt Disney World officially launched its 50th-anniversary celebration this morning with a ceremony at the Magic Kingdom. The half-century anniversary will be observed for the next eighteen months. During that time, the park will see new thrill rides open, its most ambitious hotel yet welcome its first guests, and unique entertainment at all four parks.

The pandemic caused many of Disney’s projects to be postponed, but even with the unprecedented past year and a half, the Mouse was still able to pull off an impressive celebration.

All four parks get some of the fifty gold statues of Disney characters. The statues feature a wide swath of Disney's catalog, including more recent ones from films released exclusively on Disney+. The entire resort has iridescent gold banners and signage honoring the event.

New MagicBands, now with built-in special effects, are among the highlights on retail side of things. Hundreds of new merchandise items have debuted as part of the event. Many reference the resort’s previous logos and attractions, while others try for a cleaner, more mature approach to theme park apparel. 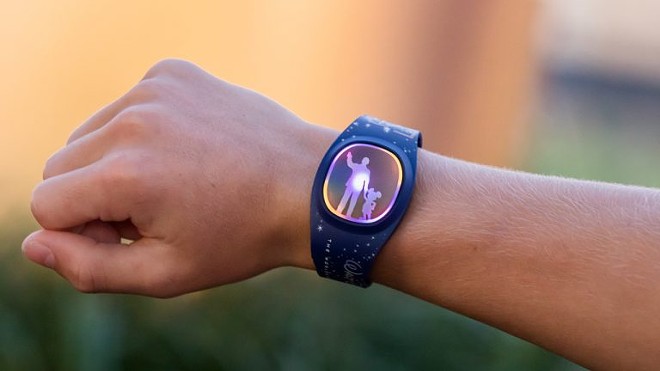 While not directly tied to the 50th Anniversary, the introduction of Disney Genie during it can’t be overlooked. The introduction of AI-powered touring plans, recommended and provided by Disney via their apps, means guests will interact with Disney Parks in ways not even imagined five decades ago.

Disney has decided to kill off the term FastPass and replace it with Lighting Lane. The new Lighting Lane access will be granted via the Genie app, where guests can choose to purchase bundles or, for select attractions, can opt for a la carte Lighting Lane access. The rollout of Disney Genie and Genie+ is likely among the items introduced during this anniversary that will have the most significant impacts on how average guests tour Disney theme parks.

With strong attendance and recent investments, Animal Kingdom was last in line when it came time to build  new experiences. After the park’s first major nighttime show, Rivers of Light, was a flop, Disney quickly closed it, and the custom-built amphitheater has sat unused since then. Drawing inspiration from Chinese kite festivals, a new daytime show in the theater will fill the air with kites inspired by Disney’s extensive library of animal-focused films, from The Lion King to The Jungle Book. Early previews of the show, which included an accident with one of the jetskis, were met with confusion and criticism by many viewers. An updated version of the Finding Nemo musical and new projection mapping on the Tree of Life round out the latest entertainment offerings.

Hollywood Studios just saw its biggest investment since the park’s opening in 1989 with the double whammy of Star Wars: Galaxy’s Edge and Mickey Mouse’s very first dark ride. The park will be getting a new sit-down restaurant in Toy Story Land, the first major addition to the land since it opened in 2018.

Hollywood Studios will likely get some attention thanks to the Star Wars: Galatic Starcruiser hotel experience that's adjacent to the park. This new highly themed multi-day experience will open in March with reservations opening later this month.

Related Pandemic or not, Disney is hard at work on fixing Epcot

Pandemic or not, Disney is hard at work on fixing Epcot
By Ken Storey
Blogs

Epcot’s transformation can’t be directly credited to the 50th, and it will continue even once the celebration ends in late 2022 or early 2023. Still, many of the most critical elements of the reimagined world’s fair-inspired park are debuting during the anniversary celebration. That includes retiring the use of the term Future World. As of this morning, Future World is now a thing of the past. Instead, Epcot now officially goes from two main themed areas to four. World Showcase remains intact, but Future World has been sliced into three small lands; World Discovery, World Celebration, and World Nature.

The park’s flagship gift shop and Club Cool, with its free flights of sodas from around the world, recently debuted in a new location. The two stores have a streamlined aesthetic with muted natural tones and original artwork.

Nearby, the Guardians of the Galaxy: Cosmic Rewind roller coaster, or story coaster as Disney refers to it, is in its final preparation. With the third installment of the Guardians franchise readying to start filming next month in Georgia, the long-awaited filming for the video segments of the attraction should take place relatively soon. Disney has confirmed the coaster will open next year.

Next door, the Play Pavilion has visible construction outside of it, but Disney has not shared details on when this kid-focused pavilion will open. Some have speculated it may now be delayed until after the 50th celebration wraps up.

Epcot was already known for its food, but the park kicked it up a notch when it debuted two new food offerings ahead of today’s anniversary. The long-awaited Space 220 restaurant opened in the Mission: Space pavilion. In the rear of the park, a creperie opened in the fantastical expansion to the France pavilion. With a new trackless dark ride, a full-service restaurant, and an expansive entrance plaza, the France expansion represent the most significant expansion to World Showcase in more than three decades.

The star of the France expansion is, of course, Remy’s Ratatouille Adventure. This trackless dark ride and much of the expansion area is a clone of an attraction that opened at Disney Studios Park Paris in 2014. Despite it being seven years old, for those who were able to preview it during soft openings ahead of today’s official opening, most seemed to acknowledge it was a much-needed addition to the adult-focused theme park.

After closing its beloved Illuminations in 2019, Epcot also saw a new nighttime show, Harmonious, debut two nights ago. The show uses large digital screens that are permanently placed in the World Showcase lagoon. The screens have been a source of disagreement among some Disney purest who don’t like their industrial look and size, which blocks the World Showcase skyline vistas the lagoon previously offered. The show itself opened to mixed reviews, with its heavy use of Disney franchises signaling a new focus for the nearly forty-year-old theme park, which has struggled to remain relevant as more guests express disinterest in educational offerings.

Updated lighting on Spaceship Earth and the monorails provided impressive, futuristic-inspired lighting around the area formerly known as Future World.

Epcot has plenty of new offerings, but the real star of the 50th is the Magic Kingdom. Last night the festivities were kicked off with a performance by Christina Aguilera. Disney CEO Bob Chapek and outgoing Disney Chairman Bob Iger then officially launched the 50th anniversary with a rededication of the park. A new nighttime spectacular, Disney Enchantment, began as well. The impressive new firework show includes the first use of projection mapping along Main Street in the park and has multiple new launch areas to help give the fireworks the effect of encircling the castle.

Minor improvements throughout the park have begun debuting, and one of the park’s opening day attractions, Jungle Cruise, saw the most extensive update in its history. A new thrill ride based on the TRON franchise was to debut during the 50th, but with pandemic-related delays, it is unclear if that is still the case. Disney has so far not given an update on the new timeline for the coaster. To correspond with the new TRON attraction, Tomorrowland has seen most of the 1990s updates removed, giving the area a feel more in line with how it felt in the 1970s when it debuted.

It’s thought the Princess and the Frog update to Splash Mountain won’t occur until after the 50th, but during the celebration, we should soon learn more about this upcoming reimagining.

Outside of the Magic Kingdom, the festivities continue with a new 50th-anniversary tag and special effects added to the Electrical Water Pageant. The Contemporary opened Steakhouse 71. Replacing The Wave, Steakhouse 71 is filled with nods to the 1970s and has numerous photos from Disney World's early days. Just outside the steakhouse, the hotel also recently unveiled an updated lobby, which features even more references to its 1970s roots.

Special limited edition food and beverage offerings can be found throughout the resort with many locations offering exclusive menu items.

Of course, it wouldn’t be a Disney celebration without plenty of marketing. Orlando International Airport is decked out with ads for the event, and Southwest debuted a plane filled 50th-anniversary décor. Disney will also be constructing the world’s largest digital art display during the celebration. This massive video screen will transform the intersection of International Drive and Sand Lake Road while injecting Disney’s presence into an area typically associated with Universal.

Special 50th-anniversary programming will be featured on ABC, Disney Parks Blog, and Disney+ throughout the day.