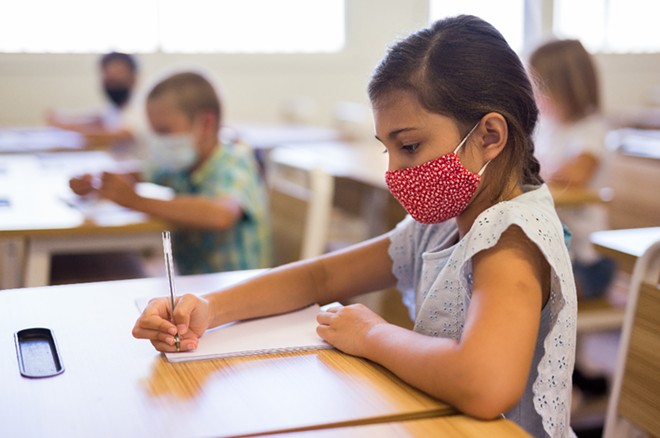 Amid a series of legal battles, a Senate Republican on Wednesday filed a proposal that would put into state law a ban on school districts requiring students to wear masks.

The proposal (SB 452), filed by Sen. Keith Perry, R-Gainesville, also would bar cities and counties from requiring people to wear masks or undergo medical procedures or treatments. It came a day after the Florida Department of Health announced it had imposed a $3.57 million fine on Leon County for requiring government employees to be vaccinated against COVID-19.

The bill is filed for consideration during the 2022 legislative session, which will start in January, and is in line with Gov. Ron DeSantis’ high-profile attempts to prevent mask and vaccination mandates.

The DeSantis administration has been embroiled in legal fights during the past two months in state, federal and administrative courts about whether schools should be able to require students to wear masks to prevent the spread of COVID-19.

DeSantis issued an executive order July 30 aimed at preventing student mask mandates, and the state Department of Health followed by issuing rules to carry out the order. Education Commissioner Richard Corcoran and the State Board of Education also have pursued financial penalties against eight districts that have defied DeSantis.

Perry’s bill would give added force —- and permanence —- by putting the prohibition on school mask requirements into state law. It also would make void any school “policy, rule, code of conduct or order” requiring masks.

DeSantis contends that parents should be able to decide whether children wear masks, and his July 30 executive order was based, at least in part, on a law passed this year known as the “Parents’ Bill of Rights.” The executive order appeared to anticipate that lawmakers could address the mask issue in the future.

“This (the executive order) does not prohibit the Florida Legislature from exploring legislation to further protect the fundamental rights of students and parents to be free from excessive, harmful regulation in schools,” the order said.

Perry is from Alachua County, where the school board has bucked DeSantis on the mask issue. The Alachua board, along with school boards in Miami-Dade, Broward, Orange, Duval and Leon counties, are challenging the latest version of the Department of Health rule in a case at the state Division of Administrative Hearings.

DeSantis’ effort to prevent school mask mandates also has been challenged by groups of parents in state and federal courts, including a case filed by parents of children with disabilities. Meanwhile, opponents of mask requirements have filed lawsuits against school districts.

While the DeSantis administration has targeted school-district mask requirements since summer, it more recently has sought to prevent local governments from requiring employees to be vaccinated against COVID-19.

Perry’s bill does not specifically mention city and county COVID-19 vaccination requirements, but it would put into law that a “county or municipality, directly or indirectly, may not require that any citizen of the United States submit to any medical procedure or receive any medical treatment. Counties and municipalities may not condition citizens’ access to public property or services based on whether a citizen has submitted to any medical procedure or received any medical treatment.”

Also, it would prevent cities and counties from imposing mask requirements.

The Department of Health announced Tuesday that it had fined Leon County because 714 employees had been required to show proof of vaccination —- with 14 people losing their jobs over the issue. The health department cited what is known as a “vaccine passport” ban that DeSantis signed into law in May.

Leon County Administrator Vince Long indicated that the county could challenge the legality of the fine.

“There is a genuine disagreement about the applicability of the (state vaccine passport) statute and rule, and the county will enforce its rights using any remedies available at law, if necessary,” Long said in a statement Tuesday.

With bills gradually being filed in advance of the 2022 session, the House does not have a proposal that is identical to Perry’s measure. But Rep. Anthony Sabatini, R-Howey-in-the-Hills, filed a bill (HB 75) last month that seeks to prevent government agencies from requiring masks and COVID-19 vaccinations.