Universal's CityWalk has gone through an upheaval in the last few years, with nearly every tenant being replaced or updated. Now, we’re learning what’s next for this multi-year evolution to Universal Orlando’s shopping and entertainment district.

In 2017, Universal surveyed guests on a variety of potential updates to CityWalk. That survey featured many concepts the resort was reportedly not considering, but we shared a few of the more likely candidates.

For years, NBCUniversal had been looking for ways to better integrate their television properties in their theme parks.At the time of the survey, it was thought Universal was readying to close the Bubba Gump Shrimp Co. and Red Coconut Club to make way for a Saturday Night Livelounge.
Our predictions about  the new Universal Studios Store, the theater upgrades, and the addition of Voodoo Doughnut proved accurate, but some details for the upcoming project have since shifted.

Theme park news and rumor site Screamscape reported renewed interest in bringing the SNL lounge concept to CityWalk Orlando, with the most likely location being the aforementioned Red Coconut Club.

The rumored permanent closure of Red Coconut became more substantiated in recent days when local nightclub news site, Save Pleasure Island posted claims that The Groove and Red Coconut Club won’t be reopening. The two clubs are among the last venues at CityWalk to remain closed following last year’s closure of the resort due to the pandemic. The Groove is also one of the few original venues still operating in CityWalk. Universal has yet to confirm if the two clubs have permanently closed, and their website still lists both as “Temporarily Closed.”

If the reporting by Screamscape is accurate, The Groove will make way for a new entertainment venue that will house escape rooms. Three years ago, Universal filed trademarks on Universal's Great Movie Escape, indicating they were looking into movie-themed escape rooms. Those trademarks remain active.

The large nightclub space may also be used for other family-focused entertainment, including an arcade or laser tag. Those options were among the entertainment in the 2017 survey alongside the now likely escape room and comedy club concepts.

That same survey also gauged guest interest in a German-style beer hall. That project had been rumored for the former Emeril’s location before it became Bigfire. Screamscape is reporting those plans have been dusted off with the beer garden now planning to replace the Universal Legacy Store.

The beer hall plans sound similar to Wubei Craft Food And Beer, an elevated Chinese beer hall concept that debuted at the new CityWalk Beijing. The concept is one of three new dining concepts by Universal Creative for the Beijing resort. Other classic CityWalk venues, including Toothsome Chocolate Emporium & Savory Feast Kitchen and Red Oven Pizza Bakery, are also found in the new CityWalk Beijing. 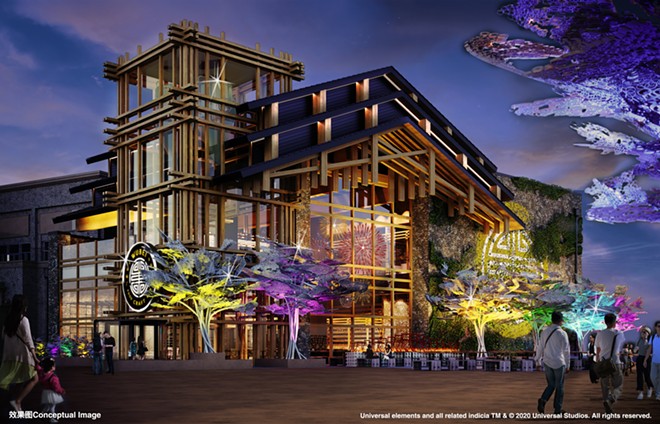 The beer garden looks to be planned for a future phase, with the SNL lounge and new escape rooms likely opening first. No date has been shared on when the new venues will open, but it's thought they debut ahead of the south campus and Epic Universe, which are expected to open around 2025.