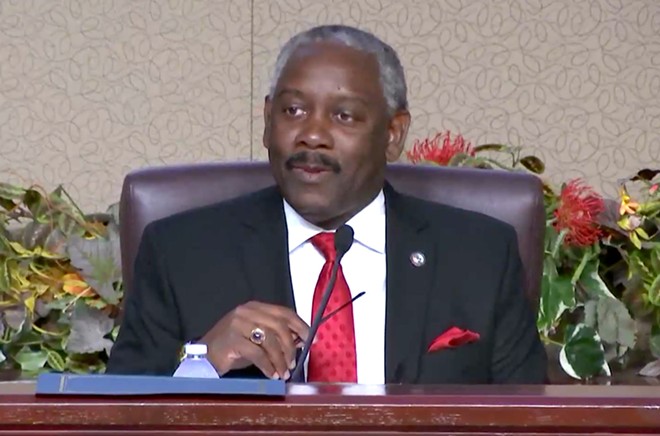 In the final weeks of 2021, Florida Gov. Ron DeSantis was nowhere to be found. As the Omicron variant pushed COVID-19 case numbers in the state higher than they had ever been, the line from Tallahassee was notably quiet.

DeSantis explained his absence before reporters earlier this week, saying he was attending to First Lady Casey DeSantis as she undergoes treatment for breast cancer. Orange County Mayor Jerry Demings saw this as a dereliction of duty on the governor's part and said as much during a recent news conference.

DeSantis' last news conference of the year came on Dec. 17 and it was a full two weeks before he appeared in public again. This drew the ire of Democrats statewide, who repeatedly asked where DeSantis was keeping himself during the explosion in coronavirus cases. Demings asked after the governor publicly on Dec. 28.


Remove Ron, a political group known for high-profile stunts against the governor, flew a banner over Miami that read "Florida is on fire and Ron is missing." The criticism only got louder when Ron and Casey DeSantis appeared at a Miami church on New Year's Eve (sans masks, despite Mrs. DeSantis' presumably immunocompromised status).

DeSantis countered the claims that he was missing in the first press conference of the year, saying that he was splitting time between working and helping his wife as she was undergoing treatment.


"A lot of people, particularly people who have gone through breast cancer treatment, the notion that would be considered a vacation, I think is offensive to a lot of those folks," DeSantis said.

Demings noted that he had plenty of familial obligations himself, telling DeSantis that dog won't hunt in Orange County.

"I've had to live through, within the last few weeks, the death of a family member, the hospitalization of my 99-year-old father, family members who have contracted COVID," he said during one of his still-regular news conferences.