29 Orlando restaurants where you can brunch around the globe

So you call yourself a "citizen of the world?" Put your money where your mouth is: Instead of settling down in front of yet another stack of blueberry pancakes and sausage links (zzzzzzz), go global the next time you brunch.

We've got plenty of "greasy spoon" spots slinging scrambles and hash, and Orlando certainly has no shortage of french toast and eggs benny, but when was the last time you slurped ramen or dove into dumplings first thing in the morning? You can do that, and more, at these spots around town that find their morning mojo in the wide world of flavor. 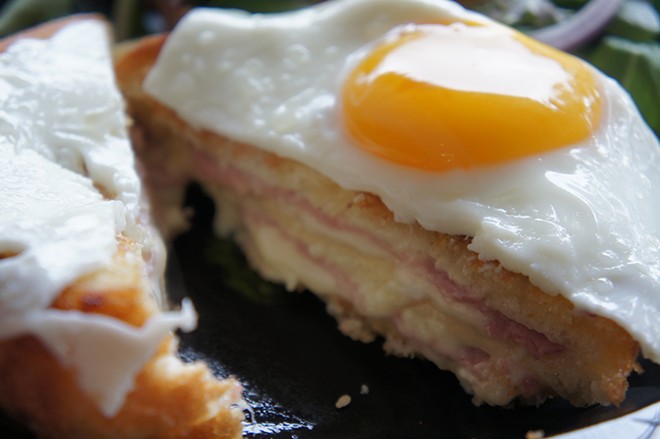 Western mainland Europe isn't an especially breakfasty place – croissant and café au lait are usually the extent of the morning meal – but the French spots in our city have raised the bar for their au maison brunch offerings. The croque-monsieur (a fried or grilled ham-and-Gruyere sandwich, sometimes topped with béchamel sauce) and croque-madame (the same, with the addition of a sunny-side-up egg on top) are the two most popular brunchy French dishes, and you'll find them at just about every restaurant français in town: Croissant Gourmet, DoveCote, Paris Bistro and Urbain 40 all have some iteration of the favorite. At Urbain 40's prix fixe, $50 brunch buffet, you'll also be privy to house-made pastries and your choice of one entrée, including French toast and steak frites. DoveCote's brunch menu starts at 10:30 a.m., and traditional brasserie fare is on tap. A salade Lyonnaise – bitter frisée lettuce topped with bacon, poached egg and honey-truffle vinaigrette – plus a glass of sparkling rosé is essential eating for Francophiles.

Sundays are for sangria at the Iberian boîtes about town. Check out Tapa Toro on International Drive, Bulla in Winter Park, and Santiago's Bodega's two always-packed locations for paella and a party to boot. Tapa Toro's four-hour brunch window is marked by a live Gipsy Kings-style band and plenty of flamenco to background the marvel of the near-perfect paella in front of your face. Their "Three Little Pigs and grits" plate is everything a carnivore wants for breakfast, with chicharrones, chorizo and braised pork belly sitting atop creamy corn grits. Bulla's Catalan menu gets an upgrade at brunchtime with a separate section for eggs. Find scrambled eggs with oyster mushrooms, chickpea stew topped with a poached egg, and of course, tortilla española (a potato omelet of sorts). Make reservations well in advance if you want a table at Santiago's Bodega. The brunch buffet is one of Orlando's most beloved weekend nosh spots, and though the buffet leans traditional, there are still quite a few Spanish-style offerings, including chorizo paella and plenty of Manchego cheese.