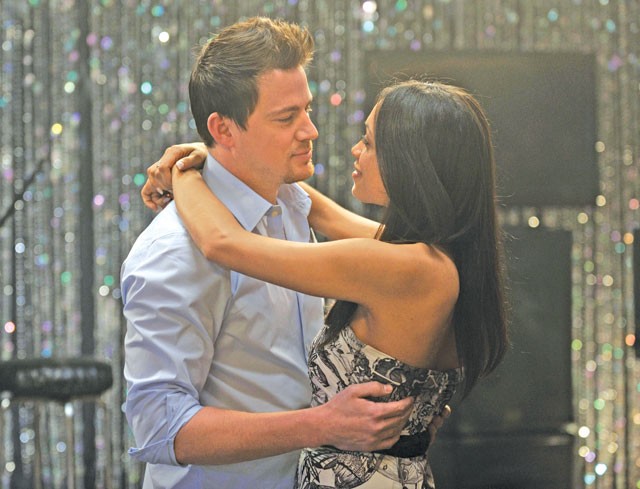 Like an exposed nerve salved and bandaged, 10 Years is an honest look at the perspective shift that a decade removed from your rawest years brings about, coated with the gloss of an all-star cast. Familiar faces like Channing Tatum and Rosario Dawson may help the medicine of melancholic nostalgia go down, but first-time director Jamie Linden's thesis is clear: Nobody has changed all that much in those mostly collegiate 10 years, but that doesn't mean they still can't.

Star and producer Tatum plays Jake, a well-adjusted kid already settled down with a serious girlfriend (real-life wife Jenna Dewan-Tatum) and a somewhat serious job as a mortgage broker. He plans on a nice night of drinking and remembrance with some old buddies, including Chris Pratt as a former bully who now bullies with attention-grabbing apologies to the once-tormented, Ari Graynor as Pratt's long-suffering wife, Justin Long, feigning cool with varying degrees of success, Kate Mara as a one-time clotheshorse shrouded in mystery and now almost entirely forgotten, and Oscar Isaac, a now-famous musician who never did forget Mara, though she forgot him. (Aubrey Plaza, Anthony Mackie, Ron Livingston and many others turn in charming supporting turns.)

Then the X-factor walks in: Mary (Dawson), Jake's high school sweetheart, now married and perhaps a bit off track. It seems Jake and Mary flamed out following the death of her father back then, and they both carry themselves with an aura of interrupted lives. As it becomes clear that neither their partners nor their friends can match the familiarity of these two, a gauntlet of sorts is thrown down for both Jake and Linden: Will they succumb to the temptation of that familiarity and ease – Linden's "Mary" being a well-worn formula – or confront the present head-on?

Happily, 10 Years, while certainly paying homage to reunion flicks, chooses the unsure footing of grounded (if a little thin) introspection. There's learning and sharing and hugging, sure, but there's also growth, surprises, loss, love and the bittersweet realization that we are not who we were no matter how hard we try.

Tatum, for maybe the bazillionth time this year, proves himself an entirely watchable talent with a keen sense of his own appeal. From 21 Jump Street to Magic Mike and many others, his roles shed new light on the old dumb-jock stereotype. He's softer and more wistful, like an Everyman trapped in Superman's body. With 10 Years, he humanizes not only Jake but the potentially one-dimensional Mary and his crew of lost kegger souls. It's quite an accomplishment: a satisfying nightcap to Tatum's meteoric prime.