100 Things You Must Do in Orlando

1. Visit the Billy Manes memorial mural at Burton's (801 E. Washington St.) and bask in the radiance. 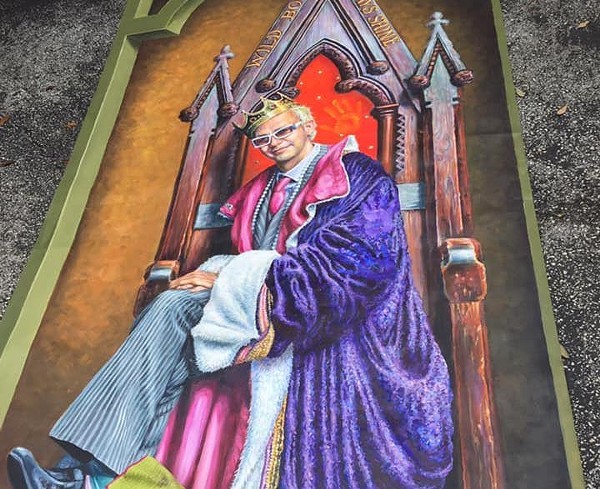 3. Take a date on a swan boat tour of Lake Eola (boat rentals are in the park near South Rosalind Street and East Robinson Avenue).

6. Arrive early enough to grab a front-row couch seat while doing dinner and a movie at the Enzian (1300 S. Orlando Ave., Maitland, enzian.org).

7. Plan your own SunRail pub crawl: Start by hitting a bar or two in downtown Orlando, ride the rail up to Winter Park, then head to Sanford where SunRail is a short Uber ride away from the bars and restaurants along First Street. Don't forget to stop drinking in time to catch the last train home. (sunrail.com)

8. Go to an improv show at SAK Comedy Lab, but don't sit in the front unless you like public humiliation (29 S. Orange Ave., sak.com).

9. Visit the Cassadaga Spiritualist Camp (cassadaga.org) to get your tarot and/or aura read, shop for crystal balls, take a ghost tour, and perch on the Devil's Chair. A more unique day trip is impossible to find.

10. Lose yourself in the visceral, testosterone-chugging, fossil fuel-incinerating joy of Monster Jam, every January at Camping World Stadium (campingworldstadium.com).

11. Creep yourself out at the Orange County Regional History Center (65 E. Colonial Blvd., thehistorycenter.org) by gazing upon Ted Bundy's name carved into a desk, supposedly by Bundy himself as he was tried in the Orange County Courthouse for the murder of Kimberly Leach. (The History Center says he didn't do the carving, but you gotta admit, it's still spooky to think of him sitting there.)

12. While you're at the History Center, pay your respects to Julius "July" Perry, the 1920 lynching victim who received a commemorative marker in Heritage Square this year.

13. ALSO while you're there, donate a buck or two to get Billy the Swan restuffed. Billy was one of the original Orlando swans, back when they swam in Lake Lucerne, not Lake Eola, and he ruled the roost from 1910 to 1933. After his death he was stuffed, but has since fallen into disrepair and, according to the History Center, "he will need a specialist in historical taxidermy to bring him back to his former glory."

14. Speaking of taxidermy, read local author Kristen Arnett's Mostly Dead Things (tinhouse.com), a novel about love and taxidermy. She's headed for the big time and you'll be able to say you read the Orlando native's work way back when.

15. Kayak a bioluminescent lagoon. In the summer through early fall, the Indian River and Mosquito Lagoon near Titusville are full of bioluminescence after dark – every movement in the water produces an eerie, sparkly light.

16. Pay your respects to the 49 victims of the mass shooting at the gay nightclub Pulse (1912 S. Orange Ave.). Dozens of people visit this site every day to bring flowers, teddy bears, balloons and even painted rocks. But please, no smiling selfies.

18. Pop in a DVD or VHS of Orlando taekwondo legend and amateur filmmaker Y.K. Kim's 1987 cult masterpiece Miami Connection. Revel in the songs of Dragon Sound and the over-the-top fight scenes, then record yourself reenacting key moments as they were filmed on the mean streets of Orlando (and send us the video).

19. Camp out in front of Park Ave CDs (2916 Corrine Drive, parkavecds.com) for Record Store Day in April for the most fun you'll have in a queue in Orlando – with live music, comedy, food trucks, giveaways and more, it feels more like a party than a ridiculous waste of time.

20. Find a new show to love on the Rollins College student-run radio station, WPRK (91.5 FM) – no longer "the best in basement radio" since they moved aboveground in 2019, but still the best. Also, one of the last surviving terrestrial student stations in the country.