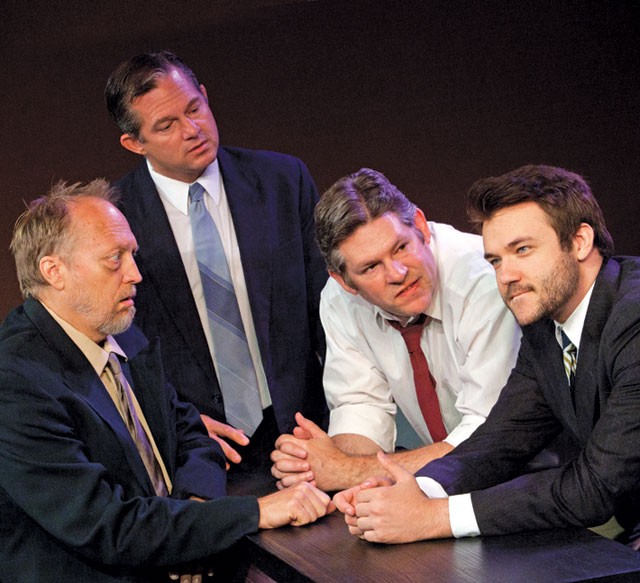 Thanks to the infamously not-guilty O.J. Simpson and Casey Anthony, the majesty associated with America's judicial system has more or less evaporated. And what with roughly a thousand CSI and Law & Order spinoffs, the mystery is mostly gone, too. You wouldn't expect a nearly 60-year-old courtroom chestnut to have anything left to say to today's cynical audience, so it's a tribute to both Reginald Rose's durable dialogue and the all-star cast assembled by director Stephan Jones that Mad Cow's revival of 12 Angry Men (which debuted in 1954 as a live teleplay) feels more dynamic than any legal drama currently on cable.

Exhibit A is the elevated audience seating arrangement installed for this final Stage Right production, prior to Mad Cow's move to 54 W. Church St.

The head-scraping height in the top row (ask for a floor seat if you have trouble with stairs) makes the sparse jury-room set feel paradoxically intimate and removed. Jones and scenic designer Cindy White place us as student surgeons in a Victorian operating theater, observing while justice is vivisected on the oblong table below us.

Around that table sit Exhibits B through M: a dozen seasoned actors, the highest concentration of talent per square foot of any recent Orlando production. Topping the cast of combatants are Philip Nolen, as the loudmouth leading the charge to send an underprivileged teenager to the electric chair, and T. Robert Pigott, as the lone holdout against execution who courageously argues for his compatriots to acquit. Nolen makes excellent use of the opportunity to play vitriolic and broken, and Pigott portrays Fonda-esque nobility with patience and a hint of humor. The two are well-matched verbal adversaries, and both actors create subtle shadings that go beyond a simple black-and-white struggle.

Save a slipped accent and slow pickup or two, this stellar cast is in near-perfect sync, successfully splitting the difference between old-fashioned earnest speechifying and propulsive Mamet-esque patter. The suits, haircuts and absence of women date the piece, but the procedural twists and ideological battles still feel relevant. Moreover, Mad Cow made jury duty seem interesting and honorable, a notion I thought CNN had permanently killed in me.

Final verdict: It's a fitting final bow for the herd's Magnolia Avenue home.