In what seems to be shaping up to be a particularly nasty autumn (if you watch politics, that is), it is refreshing to be immersed in beauty. No age is free of political agenda; not ours, not 18th-century Italy. But on Rollins' campus, you can step into the light of painter Francesco de Mura (1696-1782), who is belatedly getting his first-ever solo exhibition right here at the Cornell Fine Arts Museum. It is worth a tour to see a painter who made a breakthrough from the ossified traditions of his day.

We spoke briefly with CFAM director Ena Heller, who helped assemble this show of such significance that it will be touring other university galleries after its debut in Winter Park. "Naples," she reminds us, "was the center of the art world at the close of the 17th century." The art scene was activated by the Mediterranean sun and the cosmopolitan atmosphere of this trading port. The master of the time, Francesco Solimena, ran his atelier with something of an iron fist. De Mura was, however, his star pupil, and while he always deferred to the master, he still created his own style around color and light.

This is evident when you start in the first gallery closest to the door and view the early oil sketches. These are small paintings, studies for much larger ones that would be painted in a monastery in Monte Cassino. In one of the vicious absurdities of war, Monte Cassino was bombed by the Allies during World War II, for fear it might be a Nazi stronghold. (Sound eerily familiar, Saddam Hussein?) In any case, irreplaceable art treasures were lost forever, but here for the first time we can see his collection of studies, as well as portraits and dramatic biblical scenes. 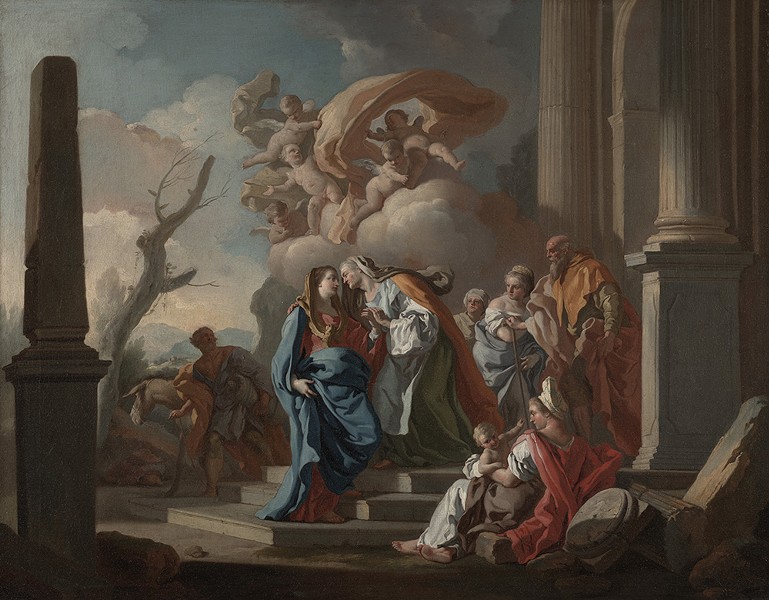 Muted color was, at the time, the genteel approach to painting. De Mura quickly mastered the human figure and became respected for his "desegno" or design of geometries interlacing heads, hands and feet into triangles and squares. Bolder and bolder with lapis-lazuli blues, ochres and violets, de Mura responded to the qualities of Neapolitan light. But baroque painting was stylized, with careful gradations from black to chromatic tones that never felt truly bright.

De Mura's self-portrait is a good example of this in the first gallery. A saturated scarlet cape and a vest dripping with gold frame his figure; on his face, a full-lipped pout reminds one of classic John Travolta. His sensuality of color took one past baroque into a new style, later named rococo. 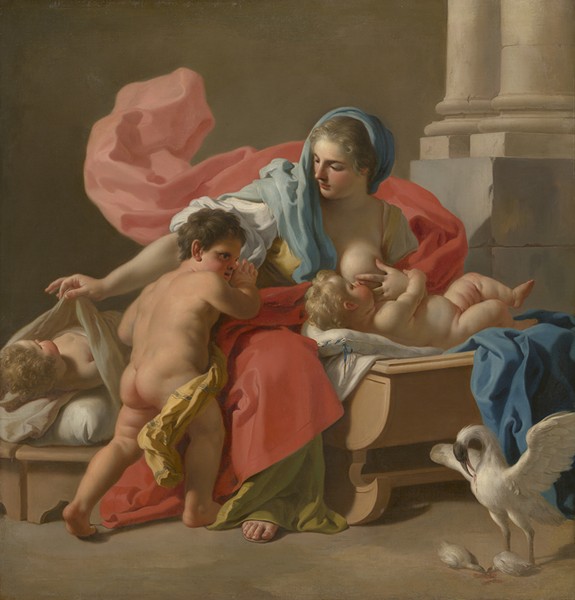 In the second gallery one is immersed in a serious study of the people of de Mura's time, personifying Mary, John the Baptist and other biblical figures. "The Visitation" is a great example: Mary is telling Elizabeth she's pregnant, and that the angel Gabriel has advised her she's going to have a rather special child. Joseph lurks in the background with his donkey. In this painting, even the background is filled with light.

While "rococo" is sometimes used as a dirty word to denote excess, it is fascinating to see one painter evolve in his lifetime from the accepted style to one all his own, while pulling the whole painting community together. One wonders who, in our pluralist world today, has the power to do the same thing.