by Bao Le-Huu and Matthew Moyer

Standing defiantly as one of the best death-rock bands in Florida – and pretty much the only (goth) game in town locally – Autarx are a thing of feral, deathly glory. They channel early American gothic groups like 45 Grave and Christian Death while keeping pace with lords of the new goth-punk church like Arctic Flowers, Bellicose Minds and Belgrado. Live shows are utterly unhinged, with pure punk abandon and dark-side dramatics acting in perfect harmony; a lush and razor-sharp tangle of jagged guitar and synth, rumbling percussion and the Siouxsie-esque presence of their vocalist, Sarah Patricia. Autarx has shared various stages with Pawns, Gino and the Goons, and the Sh-Booms, inspiring fans beyond the usual black-clad legions and making them a unique musical force in our city. – MM 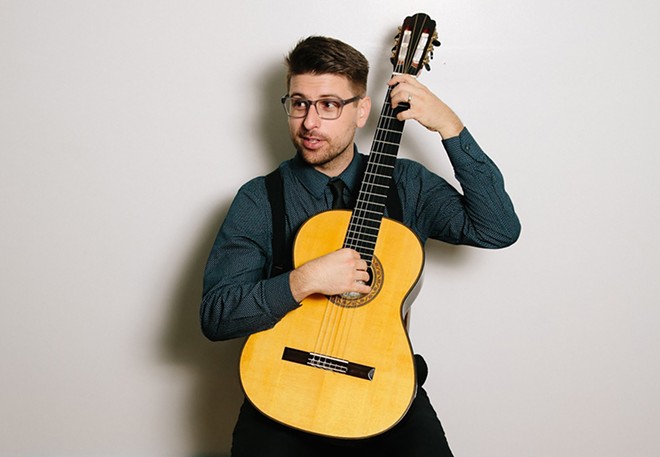 This enterprising young man is one of the most important and involved movers of culture in the city; there is probably no greater champion of Orlando's contemporary classical scene. As an impresario, he founded and directs the sui generis Accidental Music Festival. As an administrator, he's now the executive director of the essential Timucua Arts Foundation. As a player, he performs guitar in Belt & Ramirez and Ensemble AMF. And as an educator, he currently teaches "Works With Sounds," a free music composition course at the Orlando Public Library's Melrose Center that he founded through Timucua. But perhaps most definitive, Belt is the leading figure in keeping our classical music scene from being just a relic of a centuries-old European canon. His indefatigable advocacy of contemporary composers keeps the pulse here thoroughly modern, something that, really, only enlightened cities do. – BLH

Pop-punk is big in these parts, and it doesn't get more traditional or victorious than Panther Camp. All credentialed veterans of the scene, these guys know what works, what doesn't and what's just wankery, and they crank out the anthems accordingly with big rock & roll octane. Over the summer, Panther Camp released their first mini-album (The Hated, the Loved, the Willing and the Wicked) and it's a straight rocket built for the open road. They'll be taking a break soon to write their next batch of material, but you can see them play on Dec. 7 at Will's Pub, their last local show until the spring of 2017. – BLH

The Pauses are one of the most established names in Orlando's indie-rock scene. Tierney Tough and Jason Kupfer, the band's creative core, have been individually busy – the latter with his film work and the former with touring in national acts like Matt Pond and War on Women. But together as the Pauses, unfortunately, they've been living up to their name with a collective output that's been on hold for years. However, they've recently rededicated themselves and just completed a new Pauses album. Like their previous LP, 2011's excellent A Cautionary Tale (released by leading Florida indie label New Granada), this still-untitled work was produced by indie royalty J. Robbins. Though the mixed and mastered record is currently being shopped around and won't see release until 2017, the band has started to play the new material in concert, making now a prime time to check back in on the Pauses. – BLH

Two members of venerable local hip-hop collective Solillaquists of Sound step out on their own in the smoldering trip-hop-meets-torch-song duo Chakra Khan. It's serendipitous that Chakra Khan came into being this year, releasing Love Is at the Core and providing healing and soulful future music for difficult times. Atop a bed of swaying and shuffling, slurred beats and washes of ambient synth provided by Divinci, vocalist Alexandra Love lets fly with a gorgeous, commanding voice that exhorts you to heal, to love, to transcend ... to the point where you believe it's still possible, no matter how dark the world seems. – MM