Sequel to ‘300’ has no purpose or ambition, but it does have a lot of gore 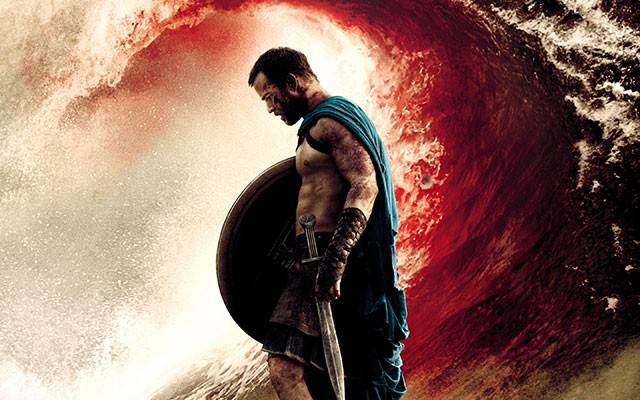 Is there any way to appropriately review 300: Rise of an Empire? This is a movie that has – whether it knows it or not – no ideology, purpose or ambition to be anything but a blood-and-guts spectacle on a massive scale. In fact, the blood and guts are so prevalent and unsparing that they grow monotonous.

Sure, there are serious voice-overs uttered by Queen Gorgo (Lena Headey) that hint at higher thinking – the power of a people and the rules of nation-states and uniting against a common enemy and blah blah blah – but they become as monotonous as the action, especially when they interrupt a climactic sword fight (which, by the way, is also monotonous).

At least 300: Rise of an Empire’s predecessor, 300, (which can be thanked or blamed for making Gerard Butler a household name), had visuals we’d never seen before. If nothing else, it provided visceral thrills simply because it looked spiffy. But 300: Rise of an Empire is muddled, stupid and pointless. It tells the story of Persian god-king Xerxes (Rodrigo Santoro) and his desire to rule Greece by having the Persian navy transport soldiers to Greek shores, and then kill the hell out of every man, woman and child.

The Persians are led by a disaffected Greek, Artemisia (Eva Green), who has legit reasons for wanting to destroy her home country. She was sold into slavery at a young age and rescued by a Persian who taught her to fight. She gained the favor of the Persian king, and with his son (that’s Xerxes) she is going to wreak havoc.

This movie is just an exercise in bloodletting. At least we’re living in a time when “blood” can be recreated with computers, because cleaning up actual stage blood for this movie would have taken longer than shooting the battle scenes. Imagine filming a take in which four soldiers are beheaded and gored, a femoral artery is severed and an arm is sliced off at the elbow. The amount of vital fluids spilled in each fight must be the equivalent of hundreds of industrial-sized bucket loads.

One Greek who manages to stay fully limbed is Themistocles (Sullivan Stapleton), the leader of a six pack-having crew of motley swordsmen. Question: Why does a guy who lives his life at war keep taking off his helmet when he sees his greatest enemy across the battlefield?

Why don’t these men wear armor? Mythology and history be damned, put on some armor! It makes a sword to the chest easier to deflect. But whatever. It’s hard to care much about any of it when the filmmakers are more interested in stunts that defy the laws of physics and creating a blood-spatter pattern that ends up on the camera lens. If that’s your idea of a great flick, please enjoy. If not, avoid it. Or if you must go, count how many times the Greeks tell each other they’re Greek and wait for the odd remix of Black Sabbath’s “War Pigs” during the closing credits.