6 movies to skip at the 2017 Florida Film Festival

by Thaddeus McCollum and Cameron Meier

To help you make the hard choices, here are some movies we didn't particularly care for 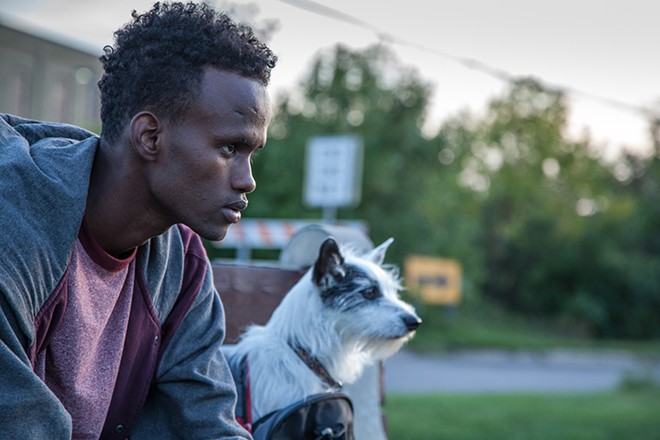 Most of us became familiar with Minneapolis's Somali immigrant population when Barkhad Abdi received his Oscar nomination for Captain Phillips in 2014. Now A Stray, starring another actor from that movie (Barkhad Abdirahman), teaches us more about that refugee community. Adan (Abdirahman) is one such refugee, and when he's abandoned by his family and friends, he turns to the one who won't judge him: a dog. But, in an interesting cultural twist, we're reminded that many Muslims view canines as unclean. "My people stick with camels and goats," he says. "At least they are useful." Yet both Adan and his companion – essentially both strays – forge an existence together in this film by Musa Syeed. And there you have a great beginning to a movie that goes nowhere and further disappoints with each passing, rambling scene and undeveloped subplot. If Abdirahman had given a more compelling performance or sharper editing had created a more dynamic pace, A Stray might have found a home in my heart. But the production is a bit too mangy for my taste. – CM

"Dave is trapped in a cardboard maze in his living room, and he can't get out," utters a character in Dave Made a Maze.

Indeed, like the party-goers in Luis Buñuel's The Exterminating Angel and the child in The Twilight Zone's "Little Girl Lost," the title character and his friends become trapped in a labyrinth that logic dictates should not exist. Throw in a Minotaur, puppets, a meta-theatrical film crew and imaginative booby traps sprung from the fertile and apparently troubled mind of Dave (Nick Thune) himself, and you have the blueprints for a delightfully surreal construction. Though first-time director Bill Watterson and writer Steven Sears deserve thanks for thinking outside the box, literally, and creating magical props and sets on a small budget, Dave's dilemma is in its writing, editing and acting, none of which are smart or crisp enough to fulfill the movie's metaphysical promise. Instead of a meaningful commentary, we're given silly tedium only occasionally interrupted by profundity. Still, it's a noble newbie effort and will likely attract a small cult following on the festival circuit. – CM

One of the best things about festivals is they show movies that challenge our perception of "normal" relationships and neatly categorized genres. Girl Flu is one of those films. The story of a 12-year-old girl traumatized by her first period, the film is, at first glance, a comedy. But throw in an atypical mother-daughter relationship and an even stranger boyfriend-girlfriend story, and the tale morphs into a rambling slice-of-life, coming-of-age drama. First-time writer-director Dorie Barton should be commended for challenging our expectations of that all-too-common genre, but, regrettably, her newbie status betrays her, as the unique elements collapse into derivative storytelling, hindered by pacing, writing and cinematography not far removed from a student project. And though the acting is mostly competent, it's no match for the air of amateurism. Barton will do better work, and probably soon, but this Flu is not one you want to catch. – CM

The civil war in Syria, now in its seventh year, has resulted in the largest humanitarian crisis in recent memory due to the mass exodus of refugees fleeing the country. And while the plight of those refugees – and the very real consequences of other governments' responses to that crisis – are worthwhile topics, 8 Borders, 8 Days is not really the documentary you want to go to for an in-depth look at the situation.

Directed by Amanda Bailly, a documentary filmmaker based out of Beirut, Lebanon, 8 Borders follows a Syrian woman called "Sham," along with her fiancé and two children, as they take an inflatable raft from Turkey to Greece, then cross into Macedonia, Serbia and Hungary on their way to Germany. And while the film certainly shows plenty of refugees having to endure physical discomfort and exhaustion during the journey, there's barely any effort to explain or provide context for what is happening on screen. Refugees are pushed back by riot shields, only to have police start letting refugees past their line one-by-one or even all at once. Sham is ebullient when showing the camera a travel visa, which we presume is important, but no one explains why. What results, then, is essentially just a real bummer of a home movie, which is a shame. The refugee crisis deserves a much more nuanced look from more capable filmmakers. – TM

If you've been longing for an absurdist, experimental documentary about rats, your wait is over. If, however – like 99 percent of the population – you haven't, you should stay away from this disappointing piece of performance art. Surprisingly, Rat Film, written and directed by first-timer Theo Anderson, is, at its core, not really about rodents. Instead, it's some sort of rat-shit-crazy metaphor about Baltimore's history of segregation and how we treat our fellow humans like rats. It's also a strange tapestry of tales woven in the style of Robert Altman – if Altman were a rat fetishist and tripping on acid. Lurching from a gritty, handheld profile of a rat exterminator, to a glimpse of people keeping rats as pets, to video-game simulations, to a hypnotically narrated overview of Baltimore's history, to rednecks crooning about bashing in rodents' brains, this film is ill-conceived and unnecessary. For some, its unique brand of essay filmmaking will be mesmerizing in a pretentious, art-film kind of way – à la Werner Herzog. But for most of you, I predict an unpleasant, confusing grind that will teach you little about either rats or people. Rat Film is coupled with a much better short doc, Clean Hands (3 stars), about a drive-in Christian church in Daytona Beach. Let us pray, with the parking brake on. – CM

Festivals are about breaking barriers, and the Florida Film Festival does just that. Movies addressing LGBT issues, for example, are being featured again this year, with Woman on Fire – a documentary about the first openly transgender firefighter in New York City – being one of the most memorable. Growing up in a family of firemen, George Guinan understood the male-dominated culture but never embraced it. First coming out as gay and then transitioning to female, George – now Brooke – had to deal not just with the realization that "being a woman was in [her] heart and mind" but also the fact that her parents were initially "sick to [their] stomach" and "devastated" at Brooke's revelations. Though Brooke's story has already been covered by mainstream media, there is still a tale to tell. Sadly, the doc doesn't live up to its subject's promise, as it relies too heavily on predictable interviews, focuses too closely on the minutiae of Brooke and her boyfriend's life, and comes across as slightly self-indulgent, the last thing one wants from a film that is so personal and potentially inspiring. The feature is preceded by The Carousel (4 stars), a doc about a historic merry-go-round in Binghamton, New York, which inspired hometown hero Rod Serling's creation of Walking Distance, one of the best Twilight Zone episodes. Watching this excellent short is akin to grabbing the brass ring. – CM