A burgeoning young scene proves comedy in Orlando is no joke 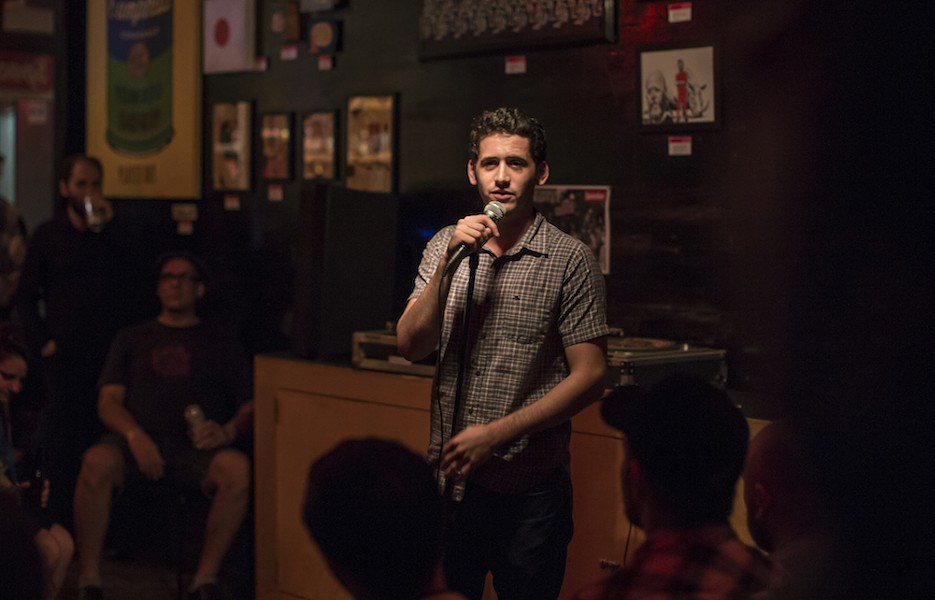 Orlando's a funny place to be a comedian. Though the tourist entertainment capital of the world has a history of hosting big-name and mainstream commercial comics for large audiences, there never appeared to be much of an independent comedy scene in Orlando, save for a smattering of open mic nights. But two years ago the fledgling scene took off, thanks to a new class of local comics.

Now comedy showcases and open mics at bars and coffee houses are happening every night of the week throughout Central Florida. Plus, the Orlando Indie Comedy Fest (launched last year) attracts some of the best names in independent comedy from across the country to the area, helping to put Orlando's comic community on national radar.

"Our scene is still a toddler compared to places like Chicago, New York, L.A. and even Austin," says local comic Tom Feeney, who recently completed a multi-state tour with fellow local comedian Nick Pupo. "Touring comics remember which cities are fun and treat them well. I got to see examples of all kinds of comedy scenes during the tour. And I'm hearing from other comedians that Orlando is becoming known as a comedy culture that takes care of comics."

Clayton Anderson, who's entering his ninth year as a local comedian, says, "Other comics look at Orlando as a comedy city where, when I started, it wasn't even a blip on the radar."

When Anderson got his first laugh, there were only a few stages in Orlando where up-and-coming comics could have an audience. Open mic nights at Austin's Coffee and guest slots at clubs like the Improv were about all Orlando had to offer newbies, though many rooms, including the now-defunct Taste Restaurant in College Park, came and went.

The path to comedic success in Orlando almost always starts at an open mic. But back then, there were very few opportunities to progress beyond that. With enough material and experience, comics could get to a point when they could start performing weekend showcases for Bonkerz, a comedy club franchise headquartered in Orlando, or the Improv, where local comedians could serve as hosts or perform guest sets. Both were unpaid gigs. The few that were good enough could graduate to feature sets, which were paid. It was a long process.

"The thing with Orlando," says comic Matt Gersting, "is the only places in town who provided that flow or process tended to cater to a very specific kind of audience – tourists and families."

That meant comedians needed to have a broad range of material in order to do well there. Only well-polished comics who generally played it safe with their jokes tended to get booked, Gersting says, which excluded a lot of local talent.

"There wasn't really any sort of mechanism to develop from open mic to be featured," he says. "There wasn't a place to go to do a 15- or 20-minute set, and it's a huge leap from doing five minutes at an open mic to 20 in front of people from out of town paying to laugh."

So in 2012, Gersting decided to put together a showcase of hand-selected comics from the area. He called it Shit Sandwich.

"It was the first curated showcase in town," he says. "The idea was to give audiences a reliably funny show and also give comics a space to do significantly longer blocks of time, in order to get their chops ready for actual club work."

Still ongoing, Shit Sandwich happens every first and third Saturday of the month at the Bull and Bush in the Milk District. The hole-in-the-wall pub has since become a local hang for Orlando's independent comedians. "There's a charm to the space that makes it feel like a real room for comedy," Gersting says. "Comics who come into town to perform there say it feels like a New York room."

Since then, Gersting says Orlando has experienced a comedy boom, ushering in a new class of comics that have taken what started with Shit Sandwich and turned it into something more.

"It's not an insignificant amount of people doing comedy in Orlando," Gersting says. "There's a lot of different people with various styles and experience levels."

There are close to a hundred people who regularly perform comedy in Orlando, including club comics as well as indie comics and improvisers who perform at SAK Comedy Lab. SAK, Orlando's long-running improv theater and company, features nightly performances of professional and student improv actors at its downtown space. It's also one of the largest improv training centers in the U.S. and has been churning out comedic actors, writers and producers, including Wayne Brady, Aaron Shure and Paula Pell (screenwriter of the upcoming Tina Fey-Amy Poehler movie Sisters), since 1991.

For George, Chlapowski and Feeney, though, comedy in Orlando is a "yes, and." They took Gersting's idea of regular showcases and ran with it on Wednesday nights at nearby Spacebar. Soon, there was a comedy night at Drunken Monkey around the corner, started by comedian Ross Martin (who recently moved to New York).

"With three shows in the Milk District with different audiences, full crowds and eclectic vibes, we have our own comedy strip," Feeney says.

Chlapowski thinks that if comedy shows are booked by comedians, they're going to be a fair and fun experience for everyone involved. "We're able to bring in different kinds of headliners who bring out a broader range of comedy fans."

Last year, Feeney got the idea to put on a comedy festival in order to raise the city's comedic profile. He joined up with Pupo (who currently has a recurring role on AMC's Halt and Catch Fire) and brought the idea to Gersting. They started planning in March 2014, and launched the Orlando Indie Comedy Fest last September.

"We made sure to have the shows at the festival at the same venues that were hosting open mics and showcases already," says Doug McPherson, a fellow comic and Full Sail University entertainment business graduate who helped the team pull off the fest. "They already had the audience and were already supporting the comedy scene. Some became sponsors. They were all on board."

Venues included the Geek Easy, Spacebar, Will's Pub and Bart, among several others. But the group credits their success to a decision they made early on – they weren't doing it for the money.

"We wanted to create something of lasting value that would contribute to more than just the city's culture but to a worthwhile charity," says Dave Plotkin, one of the fest's organizers and the only non-comedian of the group. "We wanted to make money off of comedy that would build the scene, support working comics and fund a beneficiary."

The fest partnered with the National Alliance on Mental Illness, ultimately presenting the organization with a check for $3,800 during last year's headlining Kyle Kinane set at Will's Pub.

But perhaps the element that contributed most to the success of the fest, in the eyes of the comedians, was Gersting's computer algorithm. It evenly distributed comics into performance slots that allowed them the maximum amount of exposure.

"We had 16 different shows and roughly 50 comics, most from out of town," he says. "Comics were traveling significant distances to be here at their own cost, so we wanted them all to have an equally awesome experience." Gersting devised a plan to give each comic a total of three slots at different venues at different times of day. "No comic really wants to open the show," he says. "They want the room to be warmed up. I wanted to make sure that everybody had an equitable experience. With my system, everyone got to perform as an opener, in the middle of the show and as one of the closers."

"Visiting comics stayed with local comics," George says. "It felt like camp. They were saying they never had such great accommodations on the road like they had in Orlando."

Having experienced sold-out shows in packed rooms, the participating comics spread the word that Orlando is legit. "We've had paid comics who don't need to come to Orlando submit demos for this year's festival," Feeney says. "They want to play here because they've heard such good things."

"We had to use the word 'indie' in the festival name to make sure people knew it wasn't about all that tourist BS," Pupo says. "People from out of town usually think Orlando is a dead, post-apocalyptic city, but we were able to prove that there are really good comics beyond the [big] clubs."

Like last year, the festival will feature different varieties of comedy showcases, including something called Late Late Breakfast, which originated in Chicago. It will feature free pancakes along with themed open mic slots at Will's Pub during the Sunday morning of the festival. Feeney says they're trying to incorporate more theme shows to give the regulars a break from the standard.

"This fest is helping to transform Orlando into a comedy destination – an incubator for national and local comics," Plotkin says. "Like most cool things in Orlando, comedy here has a low barrier to entry. If you want to try it, you can. There are places for you to play and perform and people who can help you become a better comic. What we're building is helping us join the ranks of comedy cities like Austin or Chicago."

The funny part is, as much as these comedians dream of one day escaping Orlando and making it big, they are helping to turn the city into a place you don't have to leave in order to succeed.

"The idea is that you can move to New York to be a professional comic – but now you don't have to," George says. "You can start here. Build your talents and following here and, eventually, make it here. Mainstream commercial success doesn't have to be the pinnacle of your career."