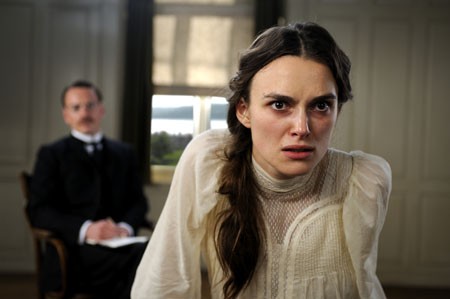 Michael Fassbender’s member has received a disconcerting amount of coverage in the last year thanks to his full-frontal turn in Shame – a performance so, uh, impressive that it earned some country-club kudos from George Clooney at Sunday’s Golden Globes ceremony – and now with A Dangerous Method, director David Cronenberg’s handsome tale of the camaraderie and competitive nature of the relationship between Carl Jung (Fassbender) and Sigmund Freud (a cigar-relishing Viggo Mortensen), Fassbender’s libido is once again front-and-center, albeit thankfully obscured by costuming. It’s enough to make you wonder whether Fassbender, or at least his agent, could use some time on Freud’s couch.

It’s fitting that all this phallic preoccupation is disrupted, in our minds and within the narrative, by the scene-stealing, primal sexuality of a woman. Keira Knightley plays Sabina Spielrein, a nearly feral Russian Jew physically forced into the care of Jung. We meet Spielrein in a harrowing opening sequence where we find her thrashing, cackling, retching; seemingly attempting to suppress, at the cost of her physical being, an animal within. As his patient, Jung helps her uncover – by way of Freud’s controversial new “talking cure,” i.e., psychoanalysis – those suppressed desires. As the sadistic lover to her masochistic submissive (cue over-the-knee punishment), he apparently spanks her sanity back into place, and soon she’s assisting him in his experiments.

Meanwhile, Jung’s admiration for Freud becomes friendship, though Spielrein’s secretive role as Jung’s mistress bubbles under the surface. If exposed, Jung’s ethical line-crossing could cost him everything, including his and Freud’s dynamic, which is already fragile thanks to its unacknowledged (by Jung) paternalistic nature.

The scenes between Mortensen and Fassbender crackle with civilized intellectual sparring, but it’s Knightley who saves the film from its inherent staginess. (It’s based on a book by John Kerr, but feels most influenced by Christopher Hampton’s play The Talking Cure.) What begins as an Oscar-baiting inhabitation of a crazed innocent unfolds beautifully to reveal a complex character whose very presence in any given scene brings it to life. Although the screenplay (also written by Hampton) is troublesome for the way it skips over the details of Spielrein’s remarkable transition from a girl smearing her food on her hospital walls to the glowing beauty whose ideas on the destructive forces of sexuality intrigued even Freud, Knightley’s all-in gusto makes those shortcomings forgivable.

And, of course, there’s Cronenberg, a master of the form who has reached the point in his extraordinary career at which he no longer feels the need to be the driving force in his films. In every choice, from the darkness that defines Spielrein’s early scenes to the melancholic drabness of Freud’s Vienna, one senses Cronenberg’s confidence without being burdened with his neurosis. Considering the subject, there’s already enough of that to go around.