A handful of music books that would look good under the tree, under your cup of coffee, under the blankets

This is my truth, you tell me yours

There will never be a world where there are too many David Bowie coffee table books, and Bowie: The Illustrated Story (by Pat Gilbert; Voyageur Press, 224 pages, $40) succeeds on all fronts. The pale, textured cover makes a close-up of Bowie's duotone eyes pop even more. Inside, there's glossy page after glossy page of Bowie throughout his long chameleonic career, with MOJO stalwart Pat Gilbert gamely trying to provide context, full well knowing everyone is just flipping eagerly to the next pose. Completists, fear not – there are some shots that we'd never seen tucked inside these pages.

An omnibus collection of critical writing on the music and life and Joni Mitchell roughly spanning the years 1968-2014, Joni: The Anthology (edited by Barney Hoskyns; Picador, 320 pages, $26) functions both as a repository of primary source reporting on the brilliant, shape-shifting singer's career, and as a reminder that, wow, a lot of early writing on women in music by men was tremendously clunky as well as downright sexist. The reader is left completely unsurprised as Mitchell gradually withdraws from interviews, leaving her work to speak for itself. Credit to Hoskyns for doing deep dives into his Rock's Backpages digital archives project, though.

We suggest you pair the Anthology with Reckless Daughter: A Portrait of Joni Mitchell (by David Yaffe; Sarah Crichton Books, 448 pages, $28), a much more satisfying and complete read. Journalism and humanities professor Yaffe was granted repeated audiences with Mitchell – instead of having to rely on rehashed press quotes – and combined with exhaustive research and deep listening to Mitchell's oeuvre, has produced the most complete look at her life and art until she decides to write her own Morrissey-sized autobiography. Revelations and insight come fast and furious, and though the page count seems daunting at first, pretty much every page is essential.

While it could have very well been a case of "Lou Reed! Patti Smith! Richard Hell! Case closed!", "Do You Have a Band?" Poetry and Punk Rock in New York City (by Daniel Kane; Columbia University Press, 296 pages, $30) succeeds spectacularly by being something very much more than that. And sure, Reed, Smith and Hell are covered – with a laser focus on their early literary endeavors – but the scope of this book extends far beyond that unholy trinity. 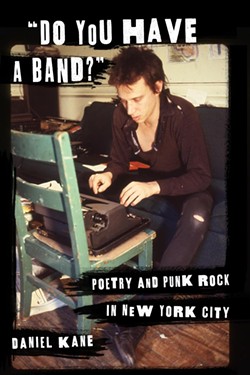 Equal time and space is given to NYC poetry/music godfather Ed Sanders (of the Fugs) as well as three figures who, to varying degrees, followed in the initial punk wake: John Giorno, Eileen Myles and Dennis Cooper. Placing Myles and Cooper within this milieu is revelatory and really puts the book into new territory rarely covered in other NYC punk histories.

Often lost in the stampede of canonization of events in and around CBGBs and Max's Kansas City, the Mudd Club in the Tribeca neighborhood of NYC was every bit as pivotal – and bacchanalian. The Mudd Club (by Richard Boch; Feral House, 445 pages, $24.95) is told as a series of evocatively written and hazily disconnected vignettes and memories from the Mudd Club's hard-living doorman Boch, and it hits the perfect balance between personal history and historical reportage. 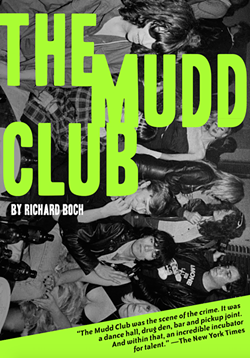 Boch was no Studio 54-style velvet-rope asshole pulling power trips; he was curating crowds and scenes and events. If you like sex and drugs sprinkled in with your rock & roll, this book brings that, along with astonishingly vivid recollections of shows as varied as a William Burroughs reading, the Funeral Etiquette Ball, and Lydia Lunch's 8-Eyed Spy and Lizzy Mercier Descloux rewriting musical rules in real time.

Meanwhile, on the West Coast, a contemporaneous punk movement was in full bloom. We Were Going to Change the World: Interviews With Women From the 1970s & 1980s Southern California Punk Rock Scene (by Stacy Russo; Picador, 320 pages, $26) highlights individuals passed over in the usual Black Flag/Dead Kennedys/SST rush. Santa Ana College librarian and lifelong punk Stacy Russo undertook a project to document the experiences of women in the epochal Cali punk scene. The resulting work is tremendous.

Each chapter is devoted to a different woman telling the story of her life in punk. Refreshingly, this book gives equal space to those on all sides of the stage/audience divide, without any hierarchy. Kira Roessler and Phranc get equal space with fans and photographers and zine writers. The diversity among the participating interviews is way inspiring, too.