With proposed budgets eliminating funding to arts-supporting organizations such as the National Endowment for the Arts and National Endowment for the Humanities, and executive orders on immigration limiting free travel across our borders (affecting many international artists), Donald Trump has made political enemies of many in the creative class. His inauguration in January ushered in a heightened energy among grass-roots progressive movements, evidenced by phenomena such as pink "pussyhats," satirical takes on the "Make America Great Again" slogan, and elaborately choreographed performances, signs and sculptures created for protests. Here in Orlando, our arts community is responding and resisting, invigorated by politically charged dialogues within and outside of the art world.

Jessica Earley is known in Orlando's art community for her sincere, vulnerable and often humorous embroideries, ink drawings and watercolor portraits, as well as her raw and emotional forays into performance art. Since November's election, Earley has directed her artistic energies into a guerrilla wheat-pasting project, informed by street art and public intervention, contributing gestures of kindness and poetic resistance to the Orlando streetscape. Many of these wheat pastes are directly in response to some of Trump's most egregious statements and executive orders, Earley's recognizable hand-lettered text providing counter-statements to Trump's vitriol with words of love and acceptance. 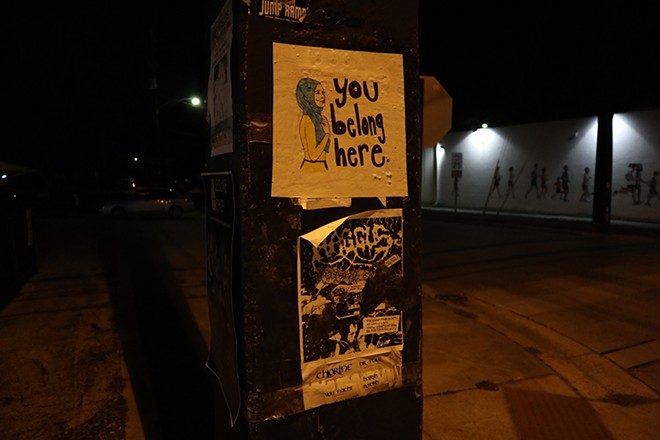 The most visible of these is a large banner pasted over a faded Andrew Spear mural on Mills Avenue (in front of the perpetually "soon to be open" Tako Cheena Express), which reads "Jesus wouldn't build a wall." Two doves holding olive branches alight atop the banner, carrying its message to passing motorists and pedestrians. Another, more sparsely designed poster asserts, "HE IS THE ENEMY NOT BECAUSE HE IS ORANGE BUT BECAUSE HE FEASTS ON DREAMS." A third paste-up depicts a woman wearing a hijab, rendered in delicate watercolor, with Earley's hand-lettered text simply stating, "You belong here."

With these gestures, Earley reclaims public space with simple and powerful political discourse, providing a respite from the corporate branding and advertisements often paraded as street art to Orlando locals. Functioning simultaneously as signifiers of protest and nuanced works of art with poetic sensibility, Earley's paste-ups make a significant contribution to the material culture of resistance to the continued violence perpetrated by those currently in power.

With mainstream media outlets inundating our collective imaginary with the xenophobic and fascist sentiments espoused by Donald Trump, it is necessary to claim space within the public sphere to assert opposing viewpoints. Many of the spaces we consider common or shared (historically centers of discussion and the "free market" of ideas) have been robbed of their political potency and transformed into a free market of numb consumption and advertisement, decommissioning political bodies into neutralized ones. Earley's project of guerrilla resistance gently subverts the corporate ooze into our public space, and reminds us of the emotional and political imperatives to resist.