Orlando Shakespeare Theater's take on classic comedy is charming, if not cohesive 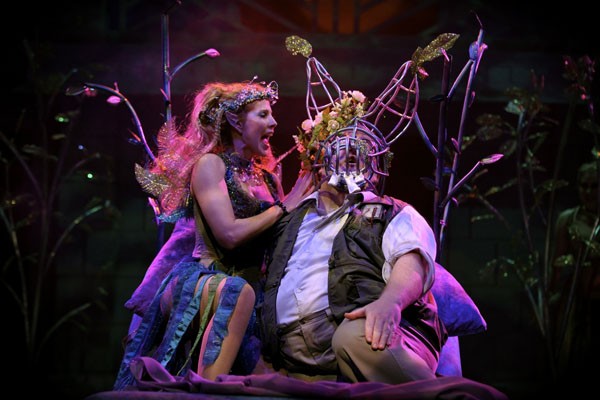 The challenge for any director staging Shakespeare's work is finding a way to faithfully present the Bard's archaic language while making the story intelligible to a modern audience. The challenge when mounting a Shakespearean comedy is in discovering how to overlay the verbal jesting with the appropriate physical actions so that the words are supported by a humorous visual correlation. The challenge when mounting A Midsummer Night's Dream is in finding a method to achieve the two aforementioned imperatives while also trying to marry the aesthetics of three completely different dramatic threads into a cohesive whole.

In the current production of the play at the Orlando Shake-speare Theater, director David Lee has met the first challenge with a capable cast of performers who sustain the play's aural structure with suitably modern elocution. He also has succeeded admirably in addressing the second challenge by way of an inventive array of physical schtick and sight gags that come off with style and conviction. The third challenge, however, has eluded him – possibly because it is essentially unattainable – so he has, perhaps wisely, decided to punt by presenting the three disparate elements of the work as a trio of distinctly different plays within the play.

The first is the comedic love story among four young, passionate and self-centered romantics – Demetrius (Walter Kmiec), Hermia (Michele Vazquez), Lysander (Avery Clark) and Helena (Courtney Moors). The course of their true love does not "run smooth," but rather careens riotously with an energy and physicality that smartly conveys the hot-blooded heedlessness and unbridled fervor of adolescent adoration. The action is furious and funny and even includes a slow-motion pillow fight – something that Shakespeare would probably never have concocted.

The second play takes place in a wood nymph-laden forest. Here, director Lee is aided in his lyrical rendering with dreamy atmospherics by set designer Bob Phillips and lighting designer Eric T. Haugen. This cooler, more subdued milieu is the realm of King Oberon (Wynn Harmon), Queen Titania (Sarah Ireland) and their fairy ensemble. Movement here is balletic and languorous, punctuated only by the swift and muscular machinations of Claro Austria's Puck, who maneuvers with cartoon-like speed, seemingly appearing in several places at once.

Last is the overtly slapstick company of tradesmen who are attempting to throw together a rendition of a tragic romance but keep falling over their own outsized shoes and egos. Chief scenery chewers here are Michael Daly as Bottom and, in a welcome departure from her usual regal roles, Anne Hering as a gum-chewing, megaphone-toting Quince.

The fact that these three threads never really mesh does not mean that the production as a whole is not without its charms. In Shakespeare's time, even his tragedies were leavened with clown sequences that broke up the action; the Bard's audiences were accustomed to shifting their attention over the course of a four-hour play. Think of it this way: with A Midsummer Night's Dream, you buy one, get two free.