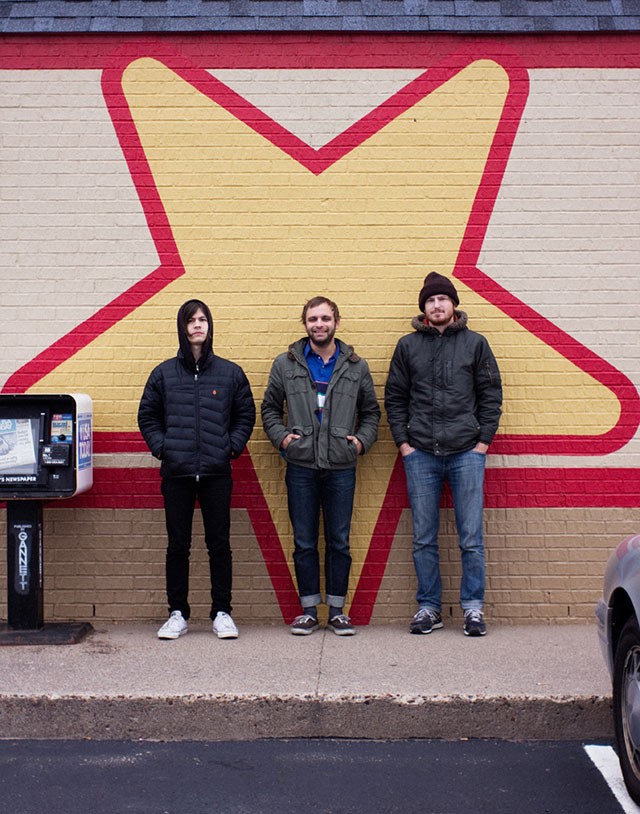 TERA MELOS with This Town Needs Guns and Great Deceivers

The third album is a milestone for a band. More secure in the studio and confident there will be more to come, it’s frequently the best album in a band’s catalog (before they lose focus, passion slackens, and/or self-indulgence blossoms). Think the Replacements’ Let It Be, Radiohead’s OK Computer, the Boss’ Born to Run, the Police’s Zenyatta Mondatta or even U2’s War.

Time will tell if X’ed Out, the third album by Tera Melos, belongs in such company, but it’s certainly the tightest and crispest of their three releases.

“You can say we’re going to make a minimalist record but you can’t expect it to sound like Joy Division,” cautions bassist Nathan Latona. “That’s not our band. There are always going to be layers and a lot of stuff going on. … For me what’s more minimal is approaching things like, ‘Let’s play this part straight.’ You can do a lot of cool, tasteful stuff without being, ‘Look what this hand is doing up here on the guitar! Crazy, right?’”

Really, they’re just happy to be here. Latona and guitarist Nick Reinhart were in several failed bands together before Tera Melos, where they proved the only members gung-ho for the road and the hardship required to build the b(r)and. Initially a four-piece, they suffered two defections (guitarist Jeff Worms, drummer Vince Rogers) after the 2005 self-titled debut that called their future into question.

“Jeff quitting the band was a little depressing, because it meant that things weren’t maybe going to be as fun as they once had been, but losing Vince, you realize how much of your life is affected by another person’s decisions,” Latona says. “It was pretty scary, but Nick and I kind of looked at the situation and wanted to keep going.”

They eventually found a replacement drummer in John Clardy, who was perhaps even a better fit thanks to punk inspirations similar to those of Latona and Reinhart. He was hired after they saw him filling in with Harry & the Potters. “They’re the cream of the crop as Potter-oriented bands go,” he cracks.

“We only pick from the upper echelon of niche-dom.”

After 2010’s Patagonian Rats with Clardy, they felt more comfortable. They complemented this ease with a more in-the-moment recording ethos.

“‘If you want to overthink it, do it on your own time, but what you’re doing now sounds cool,’” Latona recalls saying. Everything was more relaxed. “There wasn’t an air of tension around making this record like Patagonian Rats, with a new drummer, learning to write songs together and having something to prove. The record was like not even worrying or obsessing over parts, just, ‘Let’s practice, figure it out and do whatever sounds cool.’”

There’s a reason why the third time’s a charm. With X’ed Out, Tera Melos discovers the less you (over)think, the more you can feel, and feeling’s good.