Maybe last Thursday night's brisk, dry weather sent a higher voltage through Orlando's art crowd, I don't know. Maybe it was the moon. But Snap! Downtown's opening night possessed a coolly electric creative tension not felt at most local art openings. Suddenly everyone was an art expert, or at least an art lover, and they all showed up at 420 E. Church St. to witness Snap! Orlando's sixth birthday party and the unveiling of their new gallery spaces. The evening had the celebratory feel of a victory party, as if we finally got what we've long deserved: an art scene of larger proportions.

Patrick and Holly Kahn, impresarios of Snap! Orlando's growing art happenings, established a reputation with annual public photography events and the Snap! Space gallery in the old Cameo Theater on Colonial Drive. In 2015, they spied a good place to grow Snap's presence in Thornton Park, at the 420 East Apartments building.

"We think this is a good place to capture the essence of Orlando's boom," Patrick Kahn says. The sidewalk takes one past three galleries and into a corner glass vestibule. The corner gallery anchors the quiet, leafy intersection of Church Street and Lake Avenue, carving out an elegant, tall space. Inside the gallery, a warm wood backdrop glows, beckoning one further in. Blocky syncopated teal and white slabs adorn the building's exterior, but the real street action is inside the gallery. Walls festooned by our own Chris Robb and Earl Funk, as well as German artist Mark Gmehling, create a trio of different looks in the three spaces dedicated to Snap! Downtown.

Kahn's chosen artists for his inaugural event captured the essence of the scene. On opening night, Gmehling's Nu Werks, 3-D renderings of gorgeous, glossy characters, beautifully spoofed the connoisseurs crowding the gallery, while Rebecca Rose's outrageous silver and bronze Sculpturings sparkled in glass domes under their gaze. Guests jostled between DJs, bars and other people down the narrow hall connecting the three art spaces; the compression raised the anticipation to see the next gallery. Once they squeezed through to the second gallery (OG2), Chris Robb's vibrant, transparent abstracts exploded in Continuum, a pressure relief zone; further up, OG1 was dedicated to Earl Funk's Seasons Change, gorgeously aerosoled onto faux-brick wallpaper and aimed at an edgier crowd.

Up on the pool deck, about six floors above the street, the party continued. Artists and art lovers formed into knots around the pool plaza – the familiar knots that dominate most openings around town. Between the cliques flowed huge rafts of people, unraveling some knots as new faces arrived. It was interesting to watch people come out onto the monumentally scaled pool deck surrounded by six stories of apartment balconies: raised eyebrows of astonishment, as if to say "We have this kind of thing here?" Not South Beach, but here in our own town. Music spun by DJ Nigel John's sure hand and a Gmehling wall projection lent a bit of theater to the evening. Many felt a euphoric buzz that didn't come from the street address (420, get it?) – instead, it came from the feeling that we've entered a new era in Orlando, an era when we make our own scene, rather than going to Miami, New York or L.A. for a hit of urbanity. 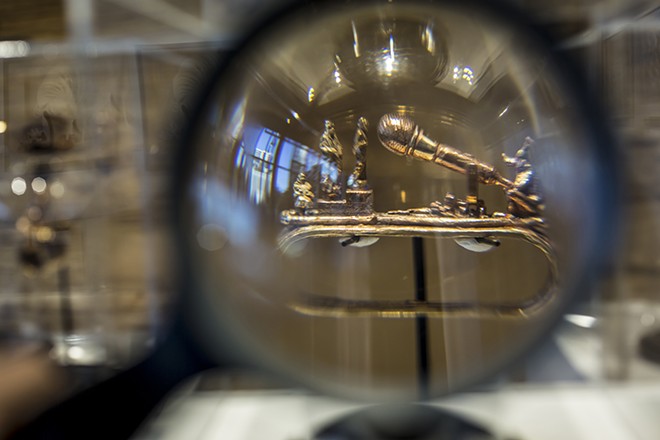 Time will tell if this newfound sophistication latches on in our own City Beautiful. The Kahns make it seem so simple and natural for us to enjoy ourselves among artists and art, and Orlandoans seem ready to claim an upscale, larger-than-life social experience revolving around fine art. Art matters, making us all a little richer, a little sexier and a little more interesting, even if just for the evening.