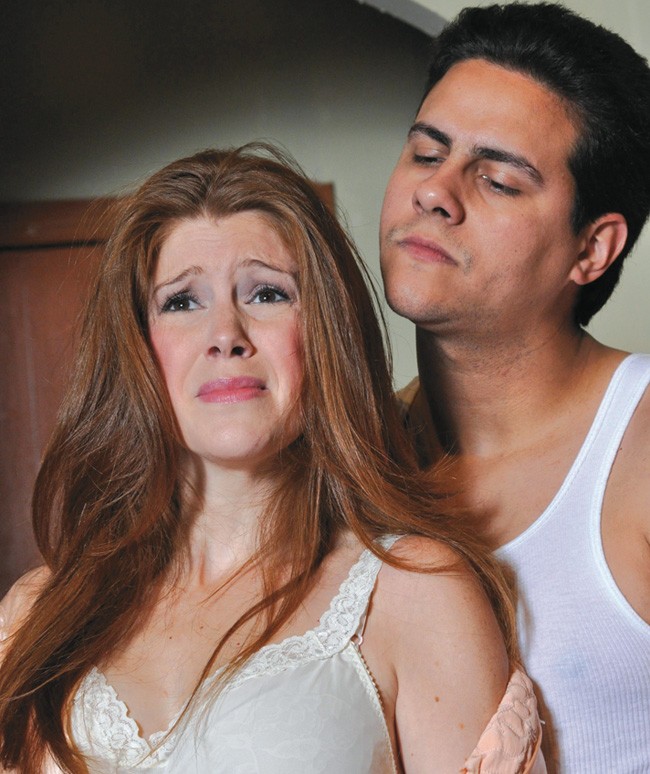 Tennessee Williams' Pulitzer-winning 1947 drama A Streetcar Named Desire is rightly recognized as one of the cornerstones or touchstones of modern American theater. Much like an actual, massive stone, it seems enduring – eternal, even – if intimidatingly unyielding. If you're around the theater long enough, it's an inevitable rite of passage. And at well over three hours long, just like a giant chunk of granite, it will surely numb your seat.

In one of my formative local theatrical credits, I stage-managed a production of Streetcar at Theatre Downtown almost a decade ago. That's why I was so excited to take a return trip on that rattletrap streetcar as it banged its way back into Orlando's Orange Avenue institution. I'm happy to report that this latest mounting of Williams' masterpiece is not simply an exercise in nostalgia, but a handsome, polished production that pays respect to the script and its traditional staging conventions. While the upcoming Broadway revival stands racial conventions on their head with the casting of Blair Underwood and Daphne Rubin-Vega as the Kowalskis, here Stanley (Stephen Pugh) is still the all-American “Polack,” taking time between factory shifts and bowling strikes to alternately brutalize and beatify his Stockholm syndrome-suffering wife, Stella (Rachel Comeau). When Stella's displaced sister, Blanche (Michelle Procopio), barges in – her artificial airs and manufactured modesty as transparent as the paper lantern she hangs over the light bulb – an explosive confrontation with her temperamentally opposed brother-in-law is inevitable.

Theatre Downtown, which launches its 24th anniversary with this production, places the Kowalskis inside a cozily claustrophobic duplex (designed by Douglas E. Huston, with vintage furnishings from Barbara Solomon) that emphasizes the uncomfortable intimacy of their living arrangements. Director Frank Hilgenberg deals with the tight confines and challenging sightlines of the thrust stage by embracing diagonals, building photo- worthy stage pictures. Unfortunately, the posing often sacrifices eye contact, with meaningful moments delivered into invisible corners or over shoulders. As a result, an emotional restraint settles over the show, which simmers but never sparks with the requisite violent passion; even the climactic rape is reduced to a framed fade-out.

The cast is well-balanced, with no one actor showboating over the others. Procopio's Blanche DuBois dials back the abrasive arrogance enough to make her a sympathetic protagonist by foregrounding Blanche's self-possession and downplaying her growing hysteria. The result is more relatable than the Southern-belle parody Blanche is frequently reduced to, but the subtlety undermines the impact of her dissolution. As Blanche's hapless suitor, Mitch, Cory Boughton is empathetic and endearing, though he sometimes seems more goofy than gallant. Comeau fares best, investing the underwritten role of Stella with a depth of despair not seen elsewhere on stage.

Of course, every Streetcar lives and dies by its Stanley. It's a dream role but a thankless one, since every actor is unfairly compared to the originator, Marlon Brando. Pugh is doubly disadvantaged, taking the stage only days after the excellent Rus Blackwell essayed the role in Orlando Shakes' staged reading. I've known and worked with Pugh for years, greatly enjoying his musical comedy talents, and he acquits himself honorably here, handling the mouthfuls of primitive poetry with aplomb. But Pugh's inherent contemporary intelligence is incompatible with fully embodying Kowalski's infamously adolescent appetites. Pugh's explosions of primal fury feel practiced, and he looks more at home in a suit and tie than in Stanley's signature wife-beaters. As the show drawled to its drunken denouement, I decided that a ride on this sturdy Streetcar makes a suitable diversion for a sultry spring evening, even if it isn't going to set the French Quarter on fire.