Opening the door to a house of secrets

"I find Orlando a little intriguing," Roger Ballen tells us in a phone interview from South Africa, "because the world comes to you for the stage sets you've created." Ballen's carefully modulated voice is deep and resonant, without much accent, and it's like hearing that inner voice of reason that you wish you heard more often. By contrast, his photography is erratic, wild and frighteningly off the grid of normalcy. For those strong of eye and mind, both may be experienced when Ballen arrives Friday, Oct. 7, for his retrospective opening at Snap! Space and at the Southeastern Museum of Photography in Daytona Beach.

More than 40 years of photography and drawing went into Ballen's style, its unique look documented in several books. Restricting himself to a square format and black-and-white film, Ballen is the king of closed spaces.

"I think of the mind as a house of secrets and buried narratives," Ballen says. His exploration of humanity is not dissimilar to Samuel Beckett's – a comparison that the artist encourages – in its sparely staged exploration of mental health and modern society. 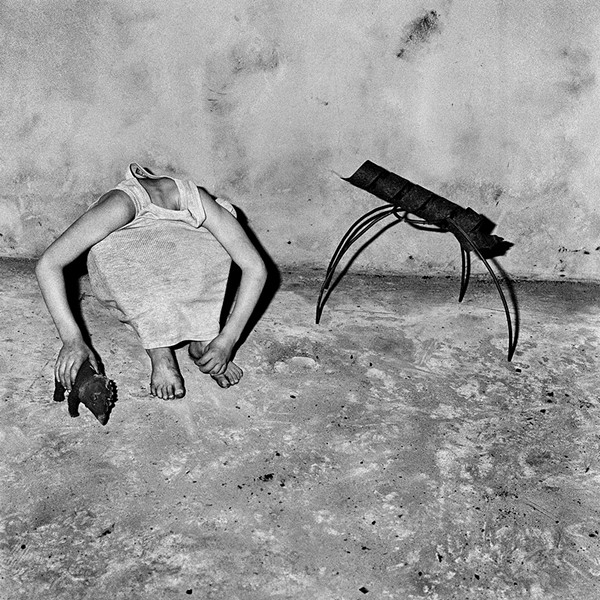 The retrospective includes his newer "documentary fiction," where he sets a stage with imagery recalling rural shacks and rooms, sometimes using masks and costumes. Earlier images examining animism, the rural poor of South Africa, and portraits of mental patients left to fend for themselves will be here as well. The unusually disturbing power of this exhibit deserves a bit of an explanation.

In his work Theater of Apparitions, Ballen created a seven-part animated film inspired by scratched drawings he found in an abandoned women's prison outside Johannesburg, South Africa. The series has a Hitchcockian creepiness, with ghosts of men, dancers, wolves and other creatures decapitating each other, axing each other, coupling, disintegrating and finally spewing forth from his jittering cranium. He says that drawings on glass windows by the women prisoners offered "insight into their stories."

While dark humor abounds in the short film, it's mostly, well, just dark. Other dark, and darkly humorous, film work includes his association with Cape Town band Die Antwoord (pictured on page 31). His music video for "I Fink You Freeky" is the only one that bears his name as co-director, but several others include images of Ballen's work, and the band's distinctive style is generally acknowledged (by those who know his work) to be heavily Ballen-influenced. In a recent interview with Canadian music site Exclaim, band member Ninja said, "He's the one who spawned us. We are literally like his disciples, his visual disciples. We make music, he does visuals. We're his children."

Ballen's journey as an artist began in Johannesburg, where he moved after graduating from Berkeley in the early 1970s. "I traveled, of course," he explains when asked why he made this his home. "But I kept coming back. The tensions of apartheid drew me, as an artist, to explore its awful injustice. I found it to be a deep well to draw from." Barred from visiting black townships, he instead visited dorps, the white shantytowns, in search of a greater understanding.

He photographed rural Afrikaners and created a sensation with images of the marginalized, sometimes inbred, sometimes mentally disabled whites forgotten by the privileged white regime. Stan, one man whom Ballen has extensively documented, collects rats during the day, brings them to his dorp, and releases them at night, over and over and over. Stan is at home in a caved-in, garbage-strewn hovel, happily grasping rat tails and dropping them, furry and squirming, into a cloth bag, cackling with glee. "My work tries to capture the inner psychological drama of how these individuals behave," Ballen calmly explains.

Snap! Space and the Southeastern Museum of Photography will co-host a retrospective of Ballen's work, going back to those Outland images where he made his early mark. More recent work involves animals, and is no less nightmarish: "Memorial," from 2007, splays a dead owl across the picture frame with a prehistoric-looking protea flower anchoring its feet. The owl's demise releases a certain tension in the viewer, as if one's Jungian bush-soul had been touched.

More recently, says Ballen, "I've been focusing upon architecture. The more that I travel, the less overwhelmed I get. Everywhere is starting to look about the same." Seeking a spark of individuality is what led him to create Theater of Apparitions out of the women's prison images.

"A building that shows its feeling, its age, and its relationship to time, is what I am after," Ballen throws down. "Architecture today is sterilized by technology. My photographs are about buildings that are outside of this monstrous environment that we have created."

Ballen's latest book, No Joke, in collaboration with New York artist Asger Carlsen, continues to explore the darker corners of the psyche. Many images are cynically funny, such as a female figure with cardboard-box hips being stared at by a dog and an old guy. Many more are quite macabre.

"People all want to be insiders," muses Ballen. "But at the end of the day, we are actually all outsiders." The ability to stand outside of society, and look inward, requires strength. If you recognize something in Ballen's work within yourself, you are likely not alone.