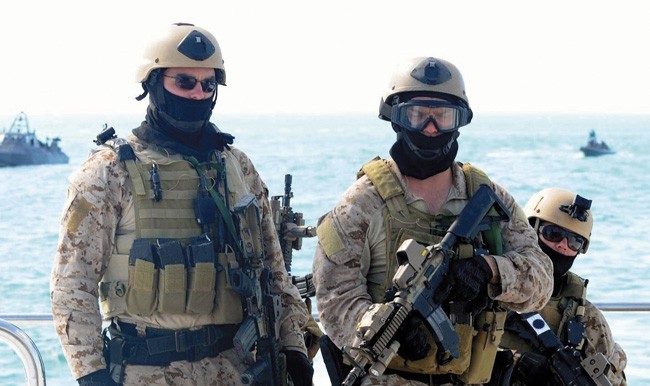 United States Navy SEAL teams – or as the public has rightly come to know them, the biggest badasses on Planet Earth, thanks to their well-documented, action-thriller-esque missions to rescue hostages, kill Somali pirates, kill Osama bin Laden and generally flex their country’s military might in the coolest ways imaginable – are many things: tough, focused and cool under pressure. What they would freely admit they are not are Hollywood actors.

Perhaps that’s why Act of Valor co-directors Mike McCoy and Scott Waugh appear in a brief prologue not so much to disclose their employment by the U.S. Navy but to couch their (or someone’s) decision to utilize actual Navy SEALs in the filming of this glossy, flag-waving bit of nonsense in vérité terms. “No actor could do the things these guys do,” they insist. Considering the sophisticated, Michael Bay-like way Act of Valor is shot and edited – not to mention the healthy serving of tasteless splatter sound effects every time a SEAL shoots a baddie between the eyes – the claim is proven false almost immediately. They know why this isn’t a “Hollywood” film as much as we do: It’s a propaganda film.

I say that as a fan of the Capra/Huston/Ford Allied propaganda films of WWII, mind you, and I don’t necessarily think of the term as pejorative, but there’s simply no other way to view a film that beams so brightly at the sight of the DoD’s money well spent. It’s just a shame that McCoy and Waugh, along with screenwriter Kurt Johnstad (one of the writers of 300) couldn’t come up with a more original way to show off.

The film is framed by voiceover narration from a team member writing a letter to the unborn child of one of his fellow soldiers who will, we gather, die in the course of the film, proudly describing “the blood that courses through your veins.” We then see SEAL Team Seven at home with their wives and kids, a respite before setting out to save the world once again. This time, their mission is of the utmost importance: A jihadist and a drug smuggler have teamed up to infiltrate the U.S. at strategic points armed with ballistic bomb vests that are undetectable.

Before long, the soldiers and the film hop around the globe, from Ukraine to Cambodia to Mexico, with each new mission bringing a new set of challenges, all of which equal roughly the same thing: shoot everyone in the head. Aside from a few breathtaking set pieces, especially one that requires underwater stealth recon followed quickly by a Spielberg-worthy vehicle chase and culminating in the use of a machine gun that fires so many bullets so quickly that it sounds like a lawn mower engine, there’s precious little for these top-tier troops to actually do besides infiltrate and shoot. And with all due respect to what these guys do in real life – not in a narrative piece of fiction, which this certainly is – we don’t exactly see anything that standard editing, costuming, advisor-assisted boot camp and a little movie magic couldn’t and hasn’t done many times over. If you begin with the dismissive claim that we will experience what the film industry can’t do, you’d better be ready to show it and prove it.

It’s not a complete failure: The apparently real-life interrogator is a blast to watch, and some battle sequences are elegantly choreographed when not in first-person-shooter Halo mode. But by the time the foreshadowed death is memorialized in an endless military funeral sequence, the whole endeavor starts to feel more like a hot-box pummeling than a rallying cry.