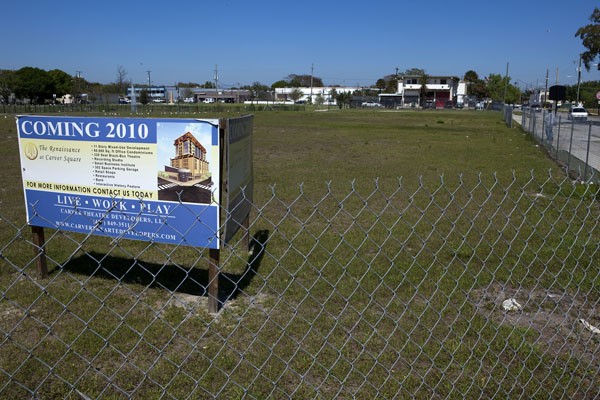 On April 28, 2009, the Orange County Board of County Commissioners approved a $125,000 grant for stage dimmers, a video camera and other high-tech equipment for a 320-seat performing arts venue at 701 W. Church St. called the Afashee Theatre. The theater hadn't been built yet, but it was to occupy the ground floor of a much larger development: an 11-story, nearly 300,000-square-foot building dubbed "Renaissance at Carver Square." Named after a movie theater for African Americans that operated at that location during the 1950s and '60s, the mixed-use project promised a parking garage, restaurants, retail space, condominiums and economically speaking, a much-needed injection of capital and jobs for the downtrodden Parramore area.

The county's donation to the theater would begin to be paid out when construction on the building was complete. Construction was scheduled to begin in June 2009, according to the grant application, but today the property is still a fenced-in grass lot with no construction equipment on the premises. The only visible activity is from birds making their perches atop a faded sign bearing a concept drawing of the Carver Square project and a heading that reads, "COMING 2010."

On March 1, the theater failed to meet its third and final deadline from Orange County to supply proof, through signed financial agreements with lenders, that the Renaissance at Carver Square would actually be built. The lost grant from Orange County, however, is only pennies compared to Orlando's ongoing stake in the development: In October 2008 the city pledged $17.5 million to the project developer as an "economic incentive" for the Carver Square project, $5.2 million of which was devoted to the Afashee Theatre. Despite having more than half of the $32 million cost paid for by the city, the project remains in limbo. According to Afashee Theatre Chairwoman Veronica Anderson, the tight lending market is the only obstacle standing in the way of the construction of the "shovel ready" project. But a closer look reveals other problems with the development, such as inexperienced management distracted by other projects and a manager who was previously implicated in the mishandling of public money.

To date, the only other investor in the project is the Black Business Investment Fund of Central Florida (BBIF), a 501(c)(4) nonprofit organization that lends to minority-owned businesses and receives annual subsidies from both Orange County and the City of Orlando. The president and CEO of the BBIF, Inez Long, is also the manager of the project's development team, Carver Theatre Developers LLC. The development company is owned by the Black Business Capital Financing Corporation, a 501(c)(3) nonprofit also headed by Long. She has no prior experience as a developer.

The BBIF has committed $2 million to the Renaissance at Carver Square; an additional $12.5 million still needs to be raised from other lenders to cover the remaining cost of the project. On March 1, Anderson, who's also a lawyer and president of Anderson and Associates P.A., sent a letter to Orange County forfeiting Afashee's claim to the cultural facilities grant; she attached three "letters of support" from lenders - Urban Trust Bank, BankFIRST and Stonehenge Capital Company - to demonstrate the project's current financial backing. All were written in February of this year, but none express any solid commitment to the project. Only one, from Stonehenge, provides a concrete number - ­$1.6 million - but only states the company is "considering" the investment.

Project spokeswoman Nancy Schwalb says the financial freeze due to the economic  downturn has a silver lining: construction costs have plummeted, so $14.5 million has been shaved off the estimated cost of the Carver Square project since it was first budgeted in October 2008. She predicts that within three months, the project will have "moved forward." "Basically, this is like any other real estate deal," she says. "They're all waiting right now for banks to commit."

Schwalb was the only person associated with the project who would speak about it at length. Inez Long declined to discuss it, and neither Veronica Anderson nor city Commissioner Daisy Lynum, District 5, who sits on the BBIF's board of directors and was instrumental in securing the city's $17.5 million economic incentive agreement, returned multiple calls to their offices.

Downtown developer Craig Ustler, president of Ustler Development Inc., says he acted as an unpaid consultant to the Carver Square project for several years; he guesses that Long and the BBIF may be too occupied with their regular duties to pull the project together. "They've done a decent job of coordinating it all, but I get the impression that they're also always working on other stuff," he says.

Long is also active in other business pursuits, at least according to state business records. In addition to managing Carver Theatre Developers, she owns the  Corlee Water Corp. bottled-water company, sits on the board of directors of the Guardian Care nursing home (as does Lynum), and is the registered agent for the I. Financial Group, a company that lists Long's home in Winter Garden as its principal address.

Long's bottled-water company gained attention in February 2008 when her husband, Fitzhugh Long, was fired from his position as Orange County minority recruitment manager after it was discovered he didn't notify supervisors that his wife had obtained county catering contracts.

Anderson has also made headlines in the past: In 1999, she resigned from a top post at the state's minority business office after an internal investigation found she had steered $10,000 toward a minority business trade group of which she was the vice president.

The City of Orlando has been more forgiving of the project than Orange County, even though it has already paid out $878,045 to the developer for the "upfront costs" of planning and designing the building. A January 1, 2010, deadline for the developer to show that it has secured the remaining loans passed with no punishment from the city, and the city has not passed a second amendment extending the deadlines. According to city spokeswoman Cassandra Lafser, the city's Community Redevelopment Agency is "currently working with a consultant to do a third-party analysis of the project looking at current market and economic conditions to determine what conditions need to be to move the project forward as it is  currently planned."

Despite the economic gloom, Schwalb is optimistic about the fate of the Carver Square project, and in particular, the Afashee Theatre: "It's going to be nationally respected from an arts standpoint, and it's going to be an amazing asset for Central Florida and the black community," she says. When asked about the lost $125,000 grant from Orange County, Schwalb says that the theater can simply apply for it again at a later date.

Terry Olson, director of Orange County Arts & Cultural Affairs, says this is possible, but also says that the experience with the project's first grant application will play a role in the decision. "Their history is considered in every application," he says. "I can't say how people would respond."

But that's a long way off, and until then, the Afashee Theatre will continue its existence solely on paper: "There might be a jazz trio on a Sunday," reads the theater's website. "In the evening on Wednesday, there might be an independent film."