After closing down the Venue, Blue Star is now playing HAÖS on Church Street

Among the simple pleasures 2020 robbed us of is the freedom to casually drop by a friend's house, grab a drink or a snack, and simply hang out. In this era of COVID, opportunities for such carefree socializing in private, much less in public, have been rarer than a blue moon, but one of Orlando's favorite artist-entrepreneurs is attempting to bring them back.

A year after shuttering her beloved Venue in Ivanhoe Village, Blue Star – the "godmother" of Central Florida's burlesque scene and creative force behind the award-winning VarieTease – has finally broken her silence and staked her claim in a location I never would have expected. Recently, she gave me a construction tour of the venerable Church Street nightspot which will soon reopen as HÄOS (pronounced "house"), a new restaurant/club concept Blue hopes will become downtown's home for local artists.

In the months since the Venue was demolished, Blue has been quietly working behind the scenes on her new project. Now, she's unveiled HÄOS on Church, her new collaboration with owner Gustavo Fonseca. The new venture combines a plant-forward Mediterranean "cuisinary" downstairs (featuring chefs Andrew Jones, Jennifer "Vedgechef" Calabria and Michael "Princess" Magonigle) with an entertainment space dubbed Upstairs @Blue's HÄOS, which will become VarieTease's home base and be available for bookings.

As a veteran of fringey theaters, I didn't expect to see Blue make a home in the middle of downtown's recently rechristened "City District," and frankly neither did she. "Every day I'm like, 'What the hell am I doing downtown?'" she admits, but she admonishes fans to leave their judgment at the door, saying "I'm still the same person, I've just got a different project going on." And despite her high-visibility new location, she hasn't lost her sense of humor; Blue says HÄOS' IKEA-esque spelling is all part of her plot "to reintroduce the umlaut into people's vocabulary and daily life."

I'd never set foot inside the short-lived Lion's Pride sports bar before Blue welcomed me in behind its paper-covered windows, but beneath the garish purple decor now being stripped away, I still recognized remnants of Phineas Fogg Balloon Works from the glory days of Bob Snow's Church Street Station. HÄOS will retain the existing exposed brick but give it a gentle whitewash; paired with brass and black accents, it will create a "sleek, modern, simple" yet "homey" aesthetic that Blue calls "Atlanta grey."

It turns out that, after searching all over town for a new location, it was the block's historic character that captured her heart. "The one thing that I always wanted was a building with the exposed brick, because it reminded me of Atlanta, and one of the few places in Orlando that you actually get that is Church Street," says Blue. "I definitely want to make this feel a little bit more warm and inviting; a place for you to come and sit and chat with your friends safely, and just feel like you're chilling at my house. I always say, if you're gonna keep me from going back to Atlanta, then it better feel like Atlanta. So, I feel like this kind of this does."

The Lion's Den's cinema-style lounge chairs have been shoved aside, and the last signs of the second floor's bookcase were being ripped out as I arrived, to make way for a small stage that will host cabarets and other intimate shows. But one signature of the former occupant will stay: The supersized video screens overlooking the two-story flexible performance space will broadcast works by local performers like Tod Kimbro, who will host a weekly dueling pianos night that Blue calls "a nice homage to the history of Church Street, yet with a new feel to it." 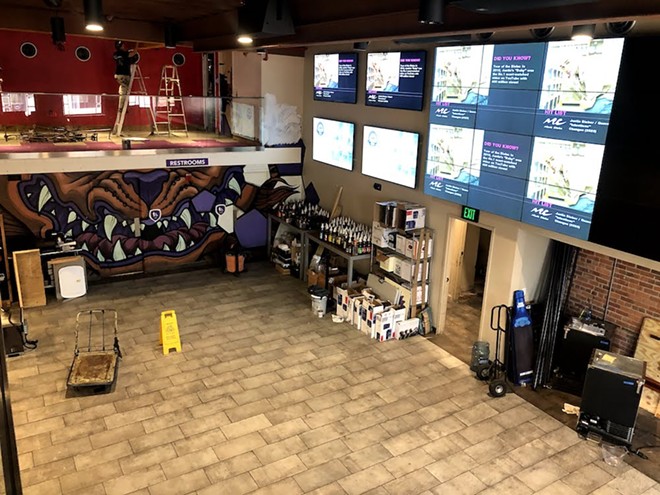 Although many other familiar faces from the Venue may appear at HÄOS, Blue makes clear this new venture is no rehash, but rather her next step upward. "It's not the Venue; it's brought with the same love, but everybody needs to evolve and change," she says. "The Venue was such a beautiful place for artists of all levels to come and find the stage for themselves [but] you've got to 'level up' at some point in time, and to survive here on Church Street you've got to give people that don't know the Venue what they're expecting. ... Of course we still want to give people opportunities; I'm probably going to be just a little bit harder on them."

At the same time, Blue hasn't forgotten the LGBTQ+ community that has supported her and she specifically doesn't want her programming – including VarieTease "tiara" brunches on the weekends – to undermine her new neighbor, Hamburger Mary's. "We just want to make sure that we play well with them across the street because they have been here for so long, they are friends of mine and I believe in them, and I want them to stay," says Blue. "Hamburger Mary's is very important to the street, so we want to do everything to lift up the business that we're on the street with."

As we discussed her plans, we had a view of the former Floridabilt across the street, another ambitious entertainment project that posted "For Lease" signs only months after opening. Blue admits, "We understand downtown has its challenges right now," but claims her partners are financially prepared to operate below 50 percent capacity (with social distancing) for the foreseeable future, and hopes free parking validation and a ride-share dropoff will improve the block's accessibility. "You have a clean slate, this whole street is pretty much gone, so can we reinvent it?" asks Blue. "It just gives us a little hope; something to look forward to, something different." That's something I could definitely use right now.