AFTER-FRINGE PARTY AND JAM The proprietors of the new Mills Avenue nightspot Club Swank were determined to have their place open in time to serve and enhance the Orlando International Fringe Theatre Festival, and that's just what's happening beginning tonight. For the next 11 evenings, festival patrons and participants will be able to prolong their enjoyment by heading over to Swank after their last show of the day has ended; what they'll find there is an ever-changing menu of skits, songs, comedy routines and dances performed by Fringers who just don't know when to call it a night. The first installment of the after-party series is a special, extended affair, starting with a 4 p.m. happy hour that whets appetites for the Fringe's official kickoff event (6 p.m. in Loch Haven Park); at 11 p.m., the Swank scene kicks into high gear with a launch soirée co-hosted by club owner Leesa Halstead Franzen and Obscenity writer/star Christian Kelty. Orlando Weekly A&E editor Steve Schneider will cut the inaugural ribbon as a new tradition in purposeful insomnia begins. "It's for entertainers and people who want to hang out with entertainers," Franzen says. And as the song goes, people who want to hang out with entertainers are the luckiest people in the world. (through May 29 at Club Swank; 407-895-4599; free)

KEITH SCRAMBLE CAMPBELL Added to the new works (fresh from the New Orleans Jazz & Heritage Festival) that the local-gone-Boulder artist will pull out of the back of his van for a brief show at DMAC is a never-seen tribute to Walt Disney painted by Scramble for the dreamer's 100th birthday commemoration in 2001. Appropriately titled "Dreamer," the black-and-white portrait features Walt surrounded by the painter's signature swirls and interpretations of Mickey, Donald, Goofy and others of Walt's creations hidden within. It was supposed to be the centerpiece for a live painting performance at the big party that would have ended with a canvas 10 times bigger, but it didn't happen - Campbell backed out because of his disgust at a (now-dropped) dispute with Disney over one of his early one-eyed icons that looks amazingly like the animated character Mike in Monsters, Inc. Campbell's also on this home visit to work with Sam Rivers on covers for the jazz legend's upcoming CDs before he heads back to Colorado in June for a summer residence at Red Rocks (where he sells paintings). Campbell's archives contain scores of paintings of Sam in action that he's captured over the last couple of decades - that's an exhibition just waiting to happen. (reception 6 p.m.-9 p.m. at The Gallery at Avalon Island at DMAC, through May 29; 407-992-1200, ext. 252; free)

FMF2005 Indie Film Jam Given the business orientation of the Florida Music Festival, it's not surprising that its first-ever indie-film subseries is being stressed as an opportunity for young directors to get their music-related videos and shorts in front of A&R reps and other industry pros. What that means to you, the audience, is a weekend spent perusing the work of Florida filmmakers who only have the $20 processing fee they've paid in common. As an added enticement, there are also five screenings of Tom Dowd & the Language of Music, a warm and wonderful documentary about the legendary record producer that was a highlight of the 2003 Florida Film Festival. While the reverent doc omits some of the darker entries on the late Dowd's résumé (he was reportedly fired from the sessions for Lynyrd Skynyrd's Street Survivors for getting inferior sounds), its compelling depiction of his nurturing personality and obvious passion for artistic achievement shows that music can still transcend money. Or so we hear. (at DMAC, through Saturday; free with FMF wristband; find times at www.floridamusicfestival.com) 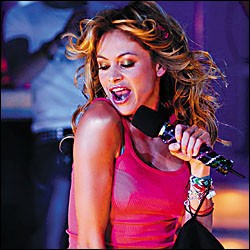 PAULINA RUBIO We must admit that a healthy (or perhaps unhealthy) proportion of our love for Paulina Rubio stems from how pretty she is. In fact, we have to admit that Rubio is so hot she makes us feel naughty just for looking at her picture for longer than a couple of seconds. Thankfully, any such guilt we have is easily absolved by the fact that this Mexican pop-tart is at least musically interesting. (No, really, we swear she is.) Rubio has just enough soul in her sabor to give her mostly lightweight (and completely infectious) dance-pop a little heft, and though she's not the world's best singer, she puts all she's got into her performances. Okay, maybe not all she's got, but you get our point. (7:30 p.m. at Hard Rock Live; 407-351-5483; $45, $55)

CIRCA SURVIVE This Philadelphia band is, like quite a few of their label mates on Equal Vision, doggedly determined to make hardcore/metalcore interesting again. How do they do it? By sucking out most of the redundant exclamations of anger and raw energy and replacing them with a dark cloud of amorphous sonic intensity. The emotion and visceral power is still there and it's all quite forceful, but it's spelled out more nebulously and atmospherically, making Circa Survive far more interesting than some muscle-bound clod screaming "fuck you" over and over again. We hear they're a freakin' powerhouse live, and we can't wait to hear what they do with the excellent material we heard on their new record, Juturna. (with Dredg, The Pale Pacific; 8 p.m. at The Social; 407-246-1419; $10)

THE BLACK CROWES Could it be that The Black Crowes are the best American rock band of the last 20 years? We think so. The very fact that they could break up for, like, five minutes and then "reunite" and have people get excited about it ... well, that should be proof enough that they at least matter. Sure, it wouldn't be the Black Crowes without the Brothers Robinson, but we're particularly excited that original drummer Steve Gorman and Southern Harmony-era guitarist Marc Ford are both back in the fold; as much as Rich Robinson's riffs did to define the "classic" Black Crowes sound, Gorman's drumming and Ford's empathetic guitar style were equally important factors in ensuring that the Crowes were more than a Faces tribute band. Expect those vintage numbers to sound better than ever and (if they even bother with them) the newer songs to actually sound decent. (with The 22-20's; 7:30 p.m. at House of Blues; 407-934-2583; SOLD OUT)