After surviving a hurricane, 'Betzy' Santiago Burgos strived to make it in Central Florida. Then she was murdered

In four days, María Santiago Burgos and her two children would be homeless.

That's all the 43-year-old could think about after FEMA had given her the ultimatum that morning. In March, her case manager told her the federal agency was extending the hotel voucher program for Puerto Rican evacuees who fled the aftermath of Hurricane María until May 14. But now, on April 16, FEMA had reversed course.

"No extensions," her case manager said.

Santiago Burgos and about 40 other families staying at the Super 8 motel off Highway 192 in Kissimmee would be kicked out by April 20.

In the parking lot of the Super 8, families gathered at dusk to protest the last-minute decision. In a dark gray jacket too big for her body, Santiago Burgos sobbed.

"I went looking for an apartment today and, aside from that, a cheap hotel that I can pay weekly," she told me in between tears. "But I couldn't find anything. Where am I going to find a place to stay with two kids?"

Motels in the area that looked safe charged $300 to $400 a week – a price Santiago Burgos couldn't afford with her low-wage construction job.

"It's maddening," she said in Spanish. "Imagínate. I have until Friday. How is someone supposed to find somewhere to live overnight?"

Standing beside her, her future killer nodded in agreement.

"It's hard," said Leumás Moraza, who would shoot Santiago Burgos in the face two weeks later. He hovered over Santiago Burgos that day as she wrung her thin hands. "There's an overpopulation. When you try to find an apartment, they tell you the waiting list is two years, five years. What's up with that?"

Like tens of thousands of other Puerto Ricans, Santiago Burgos fled to Florida after the hurricane; her home was damaged, and most of the island still lacked power and water. But mostly, she left because her husband's abuse had become intolerable after the storm. She left him and her adult children on the island and escaped with her then-12-year-old son and 14-year-old daughter. When she got to the mainland, Santiago Burgos was depressed. Slowly, she got better and worked hard to get an apartment or house. But FEMA's decision threw a wrench into her plans.

"My kids are not going to live on the streets," she pledged. "I'm calm here. I can't go back to Puerto Rico. No quiero. I don't want to."

The protest worked. By the end of the week, FEMA reversed course again, granting a last-minute extension until May 14. But Santiago Burgos wouldn't live to see it.

By May 3, she was gone, her hopes for her family's future bleeding out onto a motel room floor. 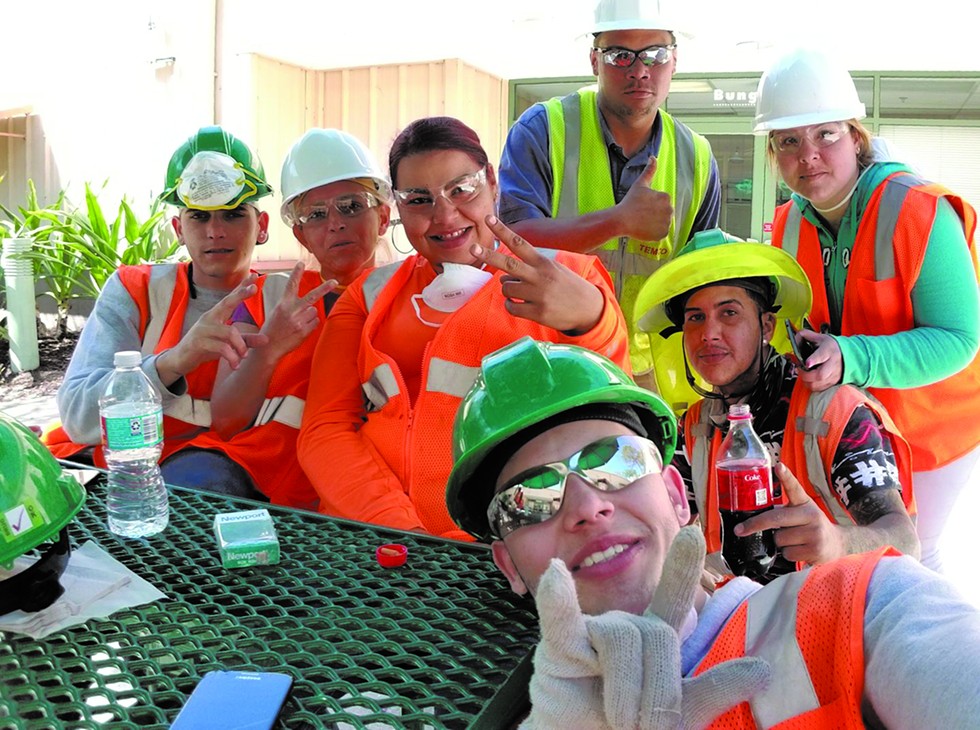 To her friends and family, María Santiago Burgos was simply "Betzy."

"With her smile, she conquered the world," her sister Jacky Santiago remembers. "Like Pinky and the Brain."

She loved practical jokes. Once, she convinced Jacky Santiago to enter a swimsuit contest on a beach in Rincón, then booed her when she fell on stage. Whenever she heard a song she liked, especially anything by Bad Bunny, she started dancing. She dyed her brown hair a honey blonde and called herself "la rubia" from then on.

"Hellooooooooo," she would exclaim when she walked into a room. "I'm here. Llegó la cheche!"

As a teenager, she started working in construction with her mother, Sonia Burgos, building bridges and homes in their home of Guaynabo and the rest of Puerto Rico. Later, she went to school to become a nurse and better provide for her four children.

"Her children were her strength and the greatest motivation for her to fight and achieve what she wanted," her mother says.