After surviving a hurricane, 'Betzy' Santiago Burgos strived to make it in Central Florida. Then she was murdered

But at some point, Moraza became her sombra – a shadow. Sonia Burgos says he would follow her daughter everywhere – bars, cafeterias, laundry runs. He would show up unexpectedly outside her motel room before work. When Santiago Burgos talked on the phone with anyone, no matter who it was, Moraza would get upset.

"He wouldn't let her breathe," Torres says. "Betzy would tell him, 'Give me space because I'm still healing from this wound. You're a good man, but right now, I'm not prepared to be in a relationship.' But he wouldn't listen."

"He acted like he had authority over her," Sonia Burgos adds. "As if he was her owner."

The situation was so bad that Juan Santiago says he had to confront his old friend.

"I told him, 'Leave my sister alone. She doesn't want to be with you. Don't confuse things,'" he says. "But he was suffocating her."

Without asking her, Moraza gave up his apartment so he could help Santiago Burgos pay for a down payment on an apartment. She felt she couldn't leave him homeless, so she offered him a spot on the motel room's couch to crash for a couple of weeks, family and friends say.

The obsession escalated. By the end of April, Torres says Moraza told her friend that if Santiago Burgos didn't give him a chance, he would kill himself in front of her.

"I'm tired of this," Santiago Burgos wrote in a text, according to Torres. "I don't know what else to do with my shadow."

By May 3, she'd had enough. Santiago Burgos told her sister-in-law and Torres she was cutting Moraza out of her life.

"She told me, 'Don't worry, mami, I'm getting out of this now,'" Torres remembers. "She was drinking her coffee right here with me. She said, 'I can't take it anymore. I'm not happy.' He was pressuring her on one end, and on the other end was the pressure of finding a place to live. It was too much."

Shortly before 10:30 p.m. that night, Santiago Burgos and Moraza were arguing outside the motel room, according to a Kissimmee Police report. Her son heard his mother say she didn't want to be in a relationship with Moraza, and that he had to leave their room. She gathered his clothes and tried to push him out by closing the door, but Moraza pushed himself inside, grabbing Santiago Burgos.

The kids screamed at him to leave their mother alone. Instead, Moraza pulled out a 9 mm Ruger handgun and pointed it at them, according to the report. As her son ran to hide, Santiago Burgos threw herself on the floor. Moraza shot her in the thigh.

Sonia Burgos, who had been in the other room, saw her daughter on the ground and charged at Moraza, pushing him onto the sofa bed. Meanwhile, Santiago Burgos' teenage daughter dragged her into the room with her son, locking the door behind them.

The report says Moraza pushed Sonia Burgos to the ground, kicking the grandmother as she lay on the floor. He broke down the door to the room where the rest of the family were hiding and pointed his gun at Santiago Burgos.

Her daughter grabbed his shirt to stop him, but Moraza fired again – this time, hitting Santiago Burgos in the back. When she turned around, Moraza blasted the gun a third and final time. The bullet struck Santiago Burgos' chin.

The young girl shoved Moraza into the living room and told him she was going to call the police, according to the report.

"Well, call the police," Moraza told her before running out the door.

"I was just arguing with my girlfriend, and I shot her," he told a dispatcher through labored breaths. "I just want the police to pick me up. That's it."

"You're doing the right thing by turning yourself in," the dispatcher told Moraza on the 911 call.

Moraza told investigators he had been in an "intimate" relationship with Santiago Burgos and that, after he confronted her about possibly seeing another man, she became distant and kicked him out of the motel room. He even blamed her for the shooting – Moraza said Santiago Burgos yelled at him, "I know you always have your firearm with you. If you want, just shoot me three times," according to the report. Moraza told detectives he "accidentally" shot her one time after she reached for the gun – though the report said he had no apparent recollection about the other two shots. Moraza faces a charge of murder and three counts of aggravated assault.

Betzy died at the hospital, just days away from getting the keys to a new apartment for her family. 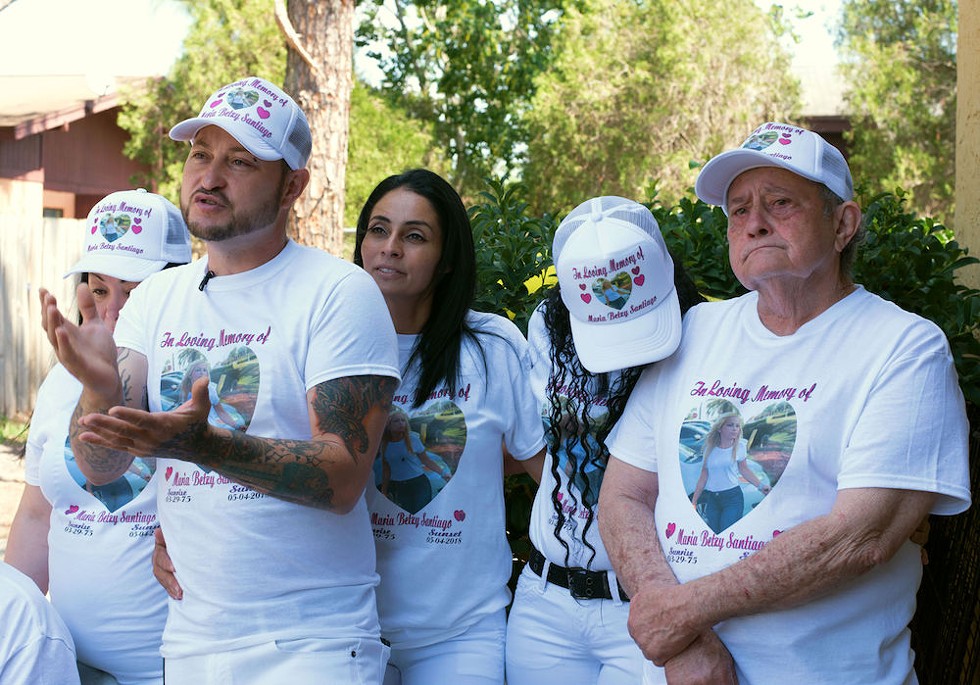 Father José Rodríguez is still fuming weeks after the murder.

The priest of Jesús de Nazaret Episcopal Church in Orlando is angry at Moraza for stealing Betzy away from her children and the people who loved her.

But he is also angry at FEMA.

"FEMA's lack of transition assistance drove this wonderful, strong human being into a vulnerable situation with a person who did not have her best intention in mind," Rodríguez says. "Betzy is this tragic symbol of hardworking folks who are trying to do their best given the limited resources they have."

Rodríguez is a member of Vamos4PR, a coalition of local organizations and advocates that have been helping Puerto Rican evacuees find resources while they stay in Central Florida. The group has also been instrumental in organizing people to fight for FEMA extensions on the hotel voucher program as the federal agency threatened to cut off housing aid.

Since October, FEMA says it has provided hotel rooms for more than 7,000 families who survived hurricanes Irma and María through the program; most of the families displaced by María made their way to Florida, especially Orlando and Kissimmee. But for the thousands of Puerto Ricans who evacuated to the mainland, the journey with FEMA has not been easy.

Each month, the agency found survivors not eligible for continued assistance if survivors' homes did not have enough damage to affect habitability; if survivors' utilities were on at the time of inspection; if survivors were staying with friends and families; and if they were not "progressing" on their long-term housing solution.