Against all odds, I had a better time at this year’s Epcot Food & Wine Festival than I have in ages

So far, 2020 has consisted of one shitshow after another, but even by current standards the past couple of weeks have been especially crappy for those involved in Orlando's arts and attractions industries.

At the theme parks, the ongoing deadlock between Actors' Equity and Walt Disney World – which has many furloughed performers feeling like voiceless pawns in a battle between their union and their employer – spilled over into the pages of the Wall Street Journal; days later, Universal announced the cancellation of their Halloween Horror Nights events on both coasts, eliminating a significant source of the Orlando resort's annual revenue.

On the stage side, several theaters abandoned the remainder of their 2020 seasons – including Winter Park Playhouse and the Dr. Phillips Center's Broadway series – just as brave participants in the Central Florida Entertainment Advocacy Forum were laying bare the systemic racism that still pervades our performing venues. And to cap it off, on July 22 we lost Marcy Singhaus, a world-class costume designer and the deliciously vicious Dorothy Parker of Orlando's drag scene.

Put it all together, and it's enough to drive you to drink – a sentiment I'm sure Singhaus would lift her margarita glass to. Unfortunately, Florida's bars and nightclubs have been closed all month, and you can only buy so many cases of spiked seltzer before getting strange looks at the supermarket. 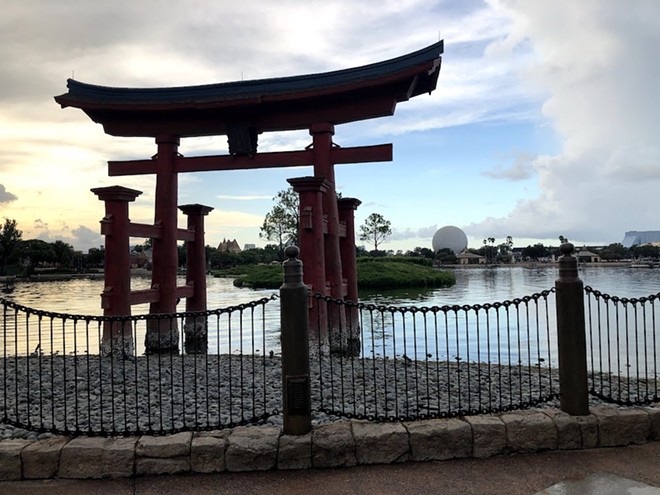 The solution, it would seem, would be to visit one of Orlando's reopened theme parks, which are about the only public places in the state where one can still walk around with an adult beverage. Or at least they were until last week, when newly issued policies put a stop to the sipping-and-strolling at both Walt Disney World and Universal Orlando. From my first visits to the reopened Disney Springs and CityWalk complexes, I noted that although compliance with the mandatory face mask requirements was generally very good, a certain segment of guests discovered and exploited a loophole allowing their removal while consuming food and drink. While intended to allow visitors to responsibly enjoy socially distanced meals, too many abused the exception, grasping a half-full Starbucks cup as an excuse to mingle mask-free for extended periods.

Now, instead of free-roaming with their oversized turkey leg, park guests must stop and find a socially distanced spot to snack in. What's more, all masks with valves are now prohibited, making mine with a built-in straw hole contraband.

These new restrictions, on top of the already extensive safety protocols all the resorts have implemented since reopening, might sound especially onerous at Epcot, where "drinking around the world" is not merely a time-honored tradition, but the major attraction in a park offering few E-Ticket rides and even less live entertainment. Ironically, Epcot's 25th Annual International Food & Wine Festival (or at least a slimmed-down "Taste" of it) opened early this year in an attempt to lure back famished fans, who have been speculating online how these new restrictions would impact an event based around walking between food booths.

The answer, as I discovered during my recent evening at Epcot, is "mostly for the better."

Right off the bat, I did miss the festival's usual elaborate welcome display, although it's refreshing to finally see the park's pristine entry plaza now that the tombstone-like "Leave a Legacy" sculptures have all been scrapped. I also missed collecting my free souvenir "passport" with trip-tracking stickers, which have been replaced with QR codes linking to Disney's mobile app. There are no replacements for the canceled cooking demonstrations, tasting seminars and dinner parties that ordinarily fill out the festival, and the park's usual mariachi and percussion ensembles are substituting for the canceled "Eat to the Beat" concert series.

Despite all those deficits, I enjoyed this year's Food & Wine better than I have in ages, because for once I didn't have to elbow other guests out of the way in order to eat off a trash can.

Created to bump anemic attendance during what was once the slow season, the festival had grown into a monster that attracted enormous mobs waving plastic forks instead of pitchforks. But in the alternate timeline that is 2020, I was able to walk up to any sample kiosk I liked without a wait, and easily find an empty high-top along the lagoon to eat or drink at. There may be fewer marketplaces (20ish instead of 30-plus) serving shorter menus, but most of my favorites can still be found – from citrus-grilled lobster tail to Moroccan hummus fries – and beer is finally available in 12-ounce pours again.

For the best of Epcot's fest, step inside the seldom-used World Showplace building tucked between the Canada and U.K. pavilions. The hangar-like event hall has been transformed into a tastefully Disney-themed wedding reception, complete with mood lighting, plenty of distanced cocktail tables and live music by Carol Stein, the Rose & Crown Pub's beloved "Piano Lady." You've still got to buy the food and booze – the vegan mac & "cheese" with "sausage" and Stiegl's Radler Zitrone make a great pairing – but the only present you need to bring to this party is your mask-covered smile.

– This story appears in the July 29, 2020, print issue of Orlando Weekly. Stay on top of Central Florida news and views with our weekly newsletters.