Inside the daring, divisive world of Montreal trio AIDS Wolf 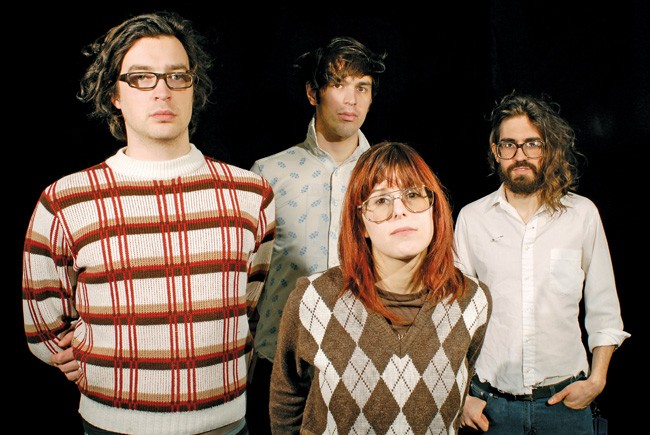 Devising a slogan that hits all the right notes is never an easy task, so the party responsible for “AIDS Wolf: The Feel-Bad Band for Desolate Times” deserves a box of fine cigars. The line, which appears on the Montreal trio’s blog, is both tongue-in-cheek and deathly serious. It has to mostly be a gag, as it’s tough to imagine any fringe-dwelling experimental outfit (especially one with a name this purposely provocative) using a slogan as a serious promotional tactic. AIDS Wolf have a cheeky, self-aware side, too, so they’re certainly in on the joke. At the same time, they truly are a feel-bad band. “We’re definitely complainers,” guitarist and multi-instrumentalist Alexander Moskos says. “Our music definitely makes people feel kind of anxious.”

AIDS Wolf’s work isn’t meant to provide enjoyment in any traditional way. There are no sonorous melodies or uplifting messages; instead, the 8-year-old band creates clanging, primordial bedlam. Guitars veer off into bizarre, ear-rattling directions and volumes, and electronic portions seem to have been played through paper shredders. The wicked goulash of sounds on Ma Vie Banale Avant-Garde (My Banal, Avant-Garde Life), their recently released fourth record, exemplifies their approach. Stylistically, they mix noise rock, powerviolence, off-the-wall post-hardcore and other crazed sounds. Their material’s gruesome, unpleasant quality is actually the crux of its appeal; listening to AIDS Wolf is about bringing repulsive feelings to the surface and then expelling them. Their product on the record represents the brain on the precipice of implosion.

Their work is also extremely divisive, which could be expected when things are this chaotic. YouTube is a breeding ground for useless comments, granted, but the feedback sprinkled around AIDS Wolf clips on the site show a spectrum of strong opinions: AIDS Wolf are “trying WAY too hard,” “more intelligent than pop music,” a “peice [sic] of shit band that sounds like dying cats,” “[m]ore punk than punk itself” and capable of making a song that sounds like “an abortion.” (That last one’s probably a compliment.)

This quality has crossed into the flesh-and-blood world, too. During one AIDS Wolf tour, Moskos remembers the band sharing a place to crash with someone who insisted that they “don’t have songs.” “It’s just like, ‘What are you talking about?’ We work so hard on composing this,” Moskos says. “I mean it’s kind of our fault, because we make really destructive music.”

That sound tends to attract fascinating audiences. Most are comprised of regular folk, but as vocalist Chloe Lum has said in an interview, “all kinds of damaged and deranged people” have appeared, too, including teenage male prostitutes, ex-cons and someone who publicly mutilated himself as they played.

Moskos recalls several other oddballs, including kids on acid and kids who attempted to steal or break their stuff. Is it AIDS Wolf’s music that brings out the strangeness and seediness in their attendees, or do the strange and seedy just flock to their music?

“A bit of both,” Moskos says. “All I know is that the weirdoes definitely come. They’re there.”