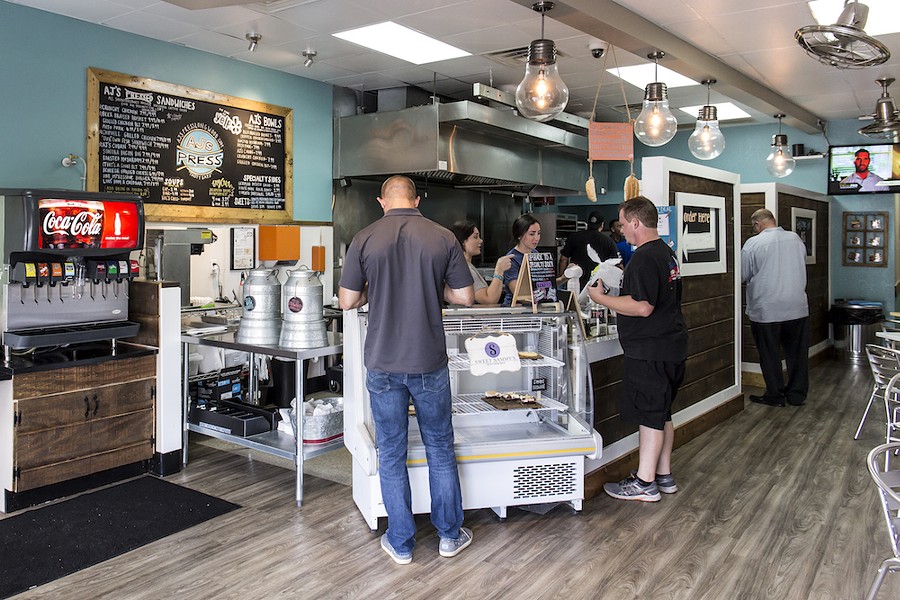 In the span of about 14 months, AJ's Press has proven so popular a sandwich joint in Tampa that it's become the fourth highest-ranked restaurant in the U.S. of A. (according to those trusted arbiters of taste at Yelp). Now, I'm the last person to give credence to a website where the benighted opinions of users with questionable and ulterior motives are given a platform and, while I've never been to AJ's in Tampa – the No. 4-ranked restaurant in the country? Really?? I will, however, say this: The Longwood outpost of AJ's Press has ironed out the kinks and is now ironing out sammies to the delight of Yelpers and schmelpers alike.

After 30 years serving as a director for Brinker International (they own the Chili's franchise), owner Andy Hesman got with the husband-and-wife team who run AJ's Tampa – Greg Lynn (a good friend of his from the Chili's days) and Jill Lynn – to talk about a second location in Andy's neck of the woods. A space opened up in the Train Depot Shoppes near the intersection of State Road 434 and Ronald Reagan Boulevard and, a few months later, hot-pressed sandwiches were being served to Longwood's fortunate sons and daughters.

Hesman himself is fortunate enough to have two of his daughters help out with service and cleanup, while his wife often assists with FOH duties. A friendlier lot you never will meet – they're all smiling faces and natural exuberance. The jalapeño-bacon hush puppies we were graciously handed while waiting to place our order were but a taste of the gratification to come, primarily in the form of pressed sandwiches on Mexican bolillo and telera rolls, the latter being the bread of choice for Mexican tortas.

The rolls are procured from Tortilleria La Mexicana, a restaurant/panaderia on West Oak Ridge Road near John Young Parkway, and they measure up – crackly crust, soft in the middle, and weighty enough to hold the porky mélange of smoky ham, smokier Cantimpalo chorizo and slow-roasted pork in AJ's Cuban ($7.49; $9.49 large). A cross-section view reveals layers of Jack cheese, pickles, mustard and mayo, though the less meaty version, a straight-up ham and cheese ($7.49; $8.99 large) is just as solid a choice, sans the luxuriance and caloric spike. They come served with seasoned lattice chips, perfectly fried in- house.

The menu, BTW, is pretty much identical to the Tampa shop. The Lynns, in fact, provided Hesman with recipes and culinary expertise, so you'll likely find little variation should you pay a visit to the original joint. (Note: Hurricane Irma badly damaged their eatery and, for the time being, AJ's has set up shop at EZ Pro Kitchen near Raymond James Stadium.) Me, I'll grunt and chavel my way through the beer-braised brisket sandwich mixed with pickled jalapeños, cilantro sour cream, salsa and arugula ($9.49; $10.99 large) every time. The crunchy chicken bowl ($7.99) might appease gluten-intolerants, but I much prefer to forgo the black beans and tortilla strips in favor of stuffing the morsels of fried chicken in a telera roll. I'd also forgo ordering their cookies, cupcakes and brownies in favor of a ridiculous breakfast sandwich of bourbon caramelized bananas and peanut butter ($5.49) called the "Elvis PRESSly." Eating it will most certainly stain your jowls and chin with a sweet sticky ooze. In a horribly embarrassing moment, I was even caught trying to lick, in fruitlessly clandestine fashion, a dab of the luscious goop off my shirt.

Bless my soul, what's wrong with me?