All eyes on Angela Corey 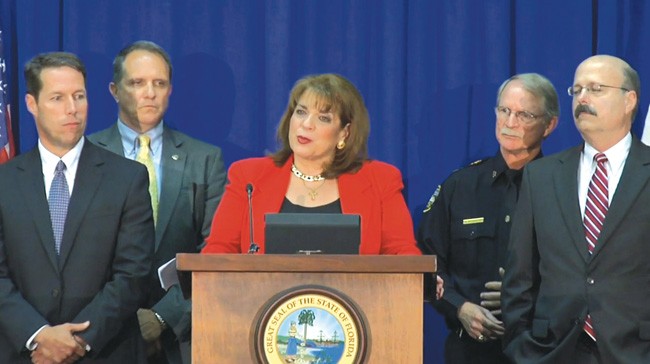 At the end of February, State Attorney Angela Corey was in the inhospitable waters of national opprobrium, castigated for filing first-degree murder charges against a 12-year-old, criticized for a probe of employees' emails, blamed in a report for jail overcrowding and reduced to hurling insults at local reporters.

On April 11, looking smart in red blazer and lipstick, sporting her signature crucifix necklace, Corey stood at a podium while the world watched, and gave the campaign speech of a lifetime.

“Good evening, everyone,” she began. “I am Angela Corey, the special prosecutor in the Trayvon Martin case.

“Just moments ago, we spoke by phone” – and here she slowed slightly for effect – “with Sybrina Fulton and Tracy Martin. It was less than three weeks ago that we told those sweet parents that we would get answers to all of their questions, no matter where our quest for the truth led us. And it is the search for justice for Trayvon that has brought us to this moment.”

A cynic might suggest that it was Corey's early support of Rick Scott's gubernatorial candidacy – she alone among the state's 20 chief prosecutors, all of whom initially backed Bill McCollum or Alex Sink – that actually precipitated “this moment.” Her appointment to the high-profile Trayvon Martin case was the purest form of political payback, a gift of publicity, a shot at political redemption and an opportunity to bask in the limelight.

A dozen satellite trucks beamed live coverage of Corey as she lavished praise on the efforts of law enforcement officials (including those who improbably shared the stage with her, like the Jacksonville sheriff and undersheriff, who have zero jurisdiction in the case), thanking 11 people by name, and unspooling a thread of superlatives that would make a best man blush.

“We are not only ministers of justice, we are seekers of the truth,” she intoned. “Every single day, our prosecutors across this great country handle difficult cases and they adhere to that same standard: A never-ending search for the truth and a quest to always do the right thing for the right reasons.”

Well played, Angela. And kudos to your speechwriter. Reaction to the presser was overwhelmingly favorable. Trayvon's parents expressed their gratitude. New York Magazine said Corey “made a striking impression with an in-command performance that laid claim to the moral high ground.” Orlando Sentinel writer Scott Maxwell wrote a column that used the word “courageous” no fewer than four times and called Corey “tougher and savvier than the average bear.”

Not all reviews were laudatory. Jon Stewart of The Daily Show took some digs at Corey's lengthy wind-up (“Could we just get the fucking charges already?!”). And famed defense attorney Alan Dershowitz lashed out in an appearance on Hardball, calling Corey's press conference a thinly disguised political gambit.

“I think what you have here is an elected public official who made a campaign speech last night for re-election when she gave her presentation and over-charged [the defendant George Zimmerman],” he said. Dershowitz predicted Corey would “win a lot of popularity contests” for her decision to charge Zimmerman with second-degree murder instead of a lesser manslaughter charge, but called her probable cause motion “not only thin but irresponsible.”

“A good judge will throw this out, and I think probably [Corey] will be satisfied with that,” Dershowitz continued. “You know, she's won her campaign … she's the hero.”

Those who live in her fourth district jurisdiction, which includes Jacksonville, are unlikely to forget now-13-year-old Cristian Fernandez and the life sentence he faces and may not ever label her a hero. The qualifying period for the State Attorneys' race ended Friday, April 20, and whatever thoughts any serious candidate had about challenging her were scuttled by her April 11 speech. “She's unbeatable,” concedes Harry Shorstein, who fired Corey in 2006 when he was State Attorney, and who remains a bitter foe. “Nobody's running now.”

Anne Schindler is the editor of Jacksonville'sFolio Weekly.