Making 80-proof applejack at home is cheap, fast and easy 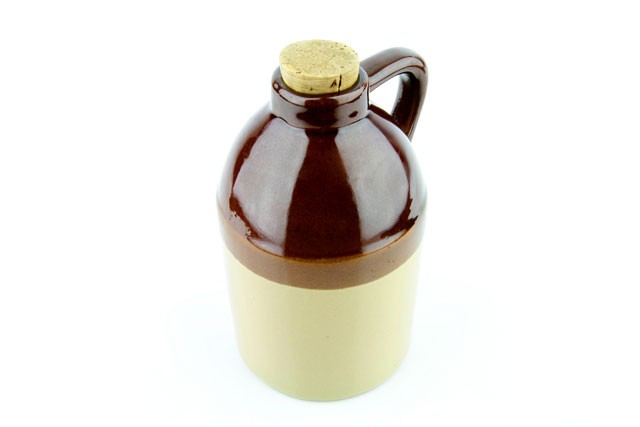 There's a weird social stigma attached to people who make their own alcohol. Whenever someone unfamiliar with the process is handed a glass of homemade booze, they always have a look in their eye like they're expecting the maker to proudly proclaim, "I done made it with my own vomit!"

But making your own booze is fun, pretty easy and doesn't even have to involve buying a shitload of materials. Plus: alcohol! – like you need any more of a reason. One of the easiest liquors to make (not to mention just about the only one that's legal to make in your home) is applejack. Made from hard apple cider, applejack is one of the oldest liquors produced in the United States, and, much like the 12-pack on moving day, it was a form of currency in Colonial days. Nowadays, it's made using modern distilling techniques, but let's do it like our forefathers did (except without the slavery and shooting at redcoats) and use the nice, legal, freeze-distilling technique.

The first thing you need to do to make applejack is to make hard apple cider. This is pretty simple, since apple juice is comprised mostly of simple sugars, meaning it ferments quickly. The important distinction when choosing your juice is to select one free of preservatives. Preservatives do a good job of preventing anything from living in the juice (no shit, right?), and yeast need to live in order to create our end product.

Now you need to find something to ferment it in. A cost-effective solution is a rectangular 2.5-gallon jug of water with a spigot on the bottom, like the ones you can get at any grocery store. Empty the water out and cut a good-sized hole in the top through which you can pour your juice.

But before you pour, sanitize. Sanitation is key to any good fermentation. If you don't sanitize, you run the risk of cider that smells like a Band-Aid, or, worse, has mold growing on the bottom of it. One tablespoon of bleach to one gallon of water is a high enough concentration to kill any errant creepy-crawlies (be sure to rinse with plain water after each application). Keep some of the bleach-water mix aside to sanitize anything else that will come into contact with the juice.

Pour the juice into the jug, then add the dry brewer's ale yeast. Don't go all cheap and use bread yeast or something – brewer's yeast has alcohol tolerance, meaning it won't shrivel up and die just when the cider's getting good. Good local sources: Hearts Homebrew (6190 Edgewater Drive; heartshomebrew.com) or the Sanford Homebrew Shop (111 Magnolia Ave., Sanford; magnoliasquaremarket.com). Cover the top opening with a generous amount of sanitized foil (to keep contaminants from getting in, while allowing carbon dioxide to get out), and put the jug someplace cool and dark for two weeks. The cool, dark spot is key because A) heat and light totally fuck with yeast, and B) it'll be out of sight and therefore not inflaming your impatience.

After two weeks you should see a healthy layer of sediment at the bottom of the jug. This means your fermentation worked, and you should have a cider that's somewhere between 5 percent and 6 percent ABV. Tasting it will reveal that it's not the best cider anyone's ever made, but hey, that's why we're freezing it. Using the spigot on the jug, gently pour the cider into the empty (and sanitized) 1-gallon jugs, being careful not to slosh and stir up the sediment. Cap the jugs and put them in the freezer for a day or two.

Once they're frozen, you'll note that you have something akin to an apple slurry. That's because alcohol doesn't freeze at home-freezer temperatures, meaning that's your delicious applejack sloshing around in there. To get at it, turn the jug upside down over the sanitized Mason jar. The applejack will dribble out (though you may need to poke at the ice to let it out). Once you think you've got it all, go ahead and give it a taste.

What you should be feeling is a slight burn. That's because if you concentrated two gallons of a 5 percent ABV beverage down to a quarter of a gallon, you now have a 40 percent ABV beverage, or 80 proof liquor. (Math! It makes drunkenness possible!)

It should taste a lot like concentrated apple cider: generally pleasant. But it gets better the longer it sits in the cold, so don't be afraid to stuff it in the back of the fridge (with the lid covered loosely in case it's still fermenting) and let it mellow out. Drink it chilled straight out of the jar for a hillbilly thrill, or try mixing it with club soda for a refreshing late-summer drink.