Libraries function in myriad ways. They're public spaces, information repositories, and places you can go to break the copy machine by stuffing them full of broken crayons. They're also living organisms – a body that is constantly morphing and shifting, aligning itself with whatever the community needs. A library is the materials it houses, but it's also the people who use it.

Susan Orlean writes about the library body extensively in her upcoming book, The Library Book. Her work examines how libraries function – including deft research of essential library history and an investigation of the massive fire that incinerated over 400,000 books at the Los Angeles Public Library in 1986 – but it's also a look at how loss and trauma can lead to necessary growth. The book is startling and gorgeous. As a librarian, I find it to be an essential text on the past, present and future of libraries. Susan took the time to speak with me via email about the book (and about libraries).

You speak a lot about libraries as community spaces. You talk about the ever-present noise; how odd it is when you're finally in the building before opening and it's actually quiet for once. Libraries are generally bustling! Was this surprising to you? Did you find yourself preferring the noise over the quiet?

Susan Orlean: There's such a stereotypical image of a library as being a hushed place with stern librarians keeping everyone quiet, so it was a delight to realize that libraries are lively, bubbling with activity and even conversation. I found the noise really pleasant – it's the noise of people engaged in what they're doing, which delighted me.

What was it like to do research about libraries when libraries themselves are research havens? Often when I am dealing with reference, I discover that questions bleed into even more questions. Did you have that feeling writing this book?

It was a little like a Russian nesting doll, especially when I discovered that the library had archives about the library in its Rare Books collection. In fact, it had 48 boxes of material, which kept me busy for about six months. This book definitely radiated more questions as I researched it, but fortunately, I was in the ideal place to answer those questions. 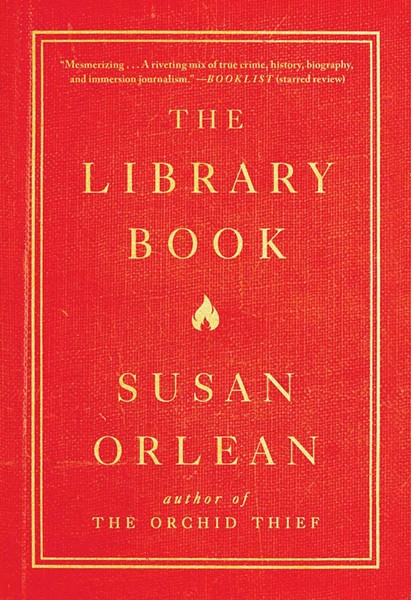 Now that the book is complete, how do you see yourself utilizing libraries in the future? Will they be a resource for future work – are you gonna ask-a-librarian?

I rediscovered the delight of working in a library and I plan to do it frequently. It's such a perfect co-working space, and it's free! I also just met the genealogy librarian at Central Library, and she's available to help guide anyone through their family research, so I'm going to take advantage of that as soon as I can. I also have begun borrowing e-media from the library. I hadn't even realized it was available for loan until I started working on the book. It's an incredible resource.

I was fascinated by your experiment to burn a book. You compare the feeling to "jumping out of an airplane." To be perfectly honest with you, it made me want to try that out myself (even though it's terrifying to even think about). Did writing about book burning take on aspects of the horror genre for you?

I definitely don't recommend burning books! I did feel compelled to do it to explore just how repugnant an act it seemed, and it definitely felt taboo. Learning about book burning throughout history was horrifying. It's such a statement of hatred and contempt that it sickened me to learn about how extensive it's been. It had the quality of a horror story, for sure.

The way that you describe the fire that devours the collection reads nearly in real time. It feels as though the fire is racing down the page. It made my heart race! Was this choice intentional? Since it had to be specifically researched, how did you write this – all in one burst, or in small specific chunks?

I wanted the reader to feel the power and fury of the fire; I wanted the section to feel urgent and incendiary. I read all the reports I could find and compiled the interviews I did with firefighters, and then sat down and wrote the section in one hot burst.

This is a book about libraries but it's also a book about loss and trauma. What was it like to write about a mystery that might never be solved?

At first, I was sure I would solve the mystery of the fire, so when it became clear that I couldn't, I was disappointed. I worried that it undermined the book that the arson remained unsolved. Instead, I tried to write the book as a sort of "choose-your-own-adventure" story, providing the reader with several different options of what might have occurred. It was how I made my peace with the lack of resolution.

Not only do you write intense descriptions of the people in your book, you also use this vivid language to describe libraries and parts of the collection. Is this because you feel like the buildings and books are just as alive as the people?

I love writing about place, and I feel they are animated by their history, by their use, by the lives of the people who pass through them. It felt natural in the case of libraries in particular, since they also preserve all the stories of our culture; they reverberate with life.

I once had a professor who told me they didn't use library books because they didn't like the idea of someone else having that book before them. You write a lot about the appeal of new books – that idea of owning something, the particular smell, the feel and sound of cracking a fresh spine. What would you say is the allure of circulating materials? Is there a different kind of love affair to be had with a book that a community owns versus a book that a single person owns?

There is something about sharing that makes a library book different; maybe it's just our ability to imagine who else has held the book and experienced reading it before us, and who might after us. It's like being part of a daisy chain of narrative. There is also something heartening about being part of a community that shares – the way being in a public park has a different feeling than being in a private backyard. It feels good to know we can cooperate with one another peacefully.

What's the best way people can support their local libraries?

Use them! The vibrancy of libraries depends on them being used often by as many people as possible. Use them, donate to them, celebrate them. They are essential to us as a society.

Read a longer version of this interview on LitHub.