By teaming with a local college, Park Ave CDs sets its own unique stage 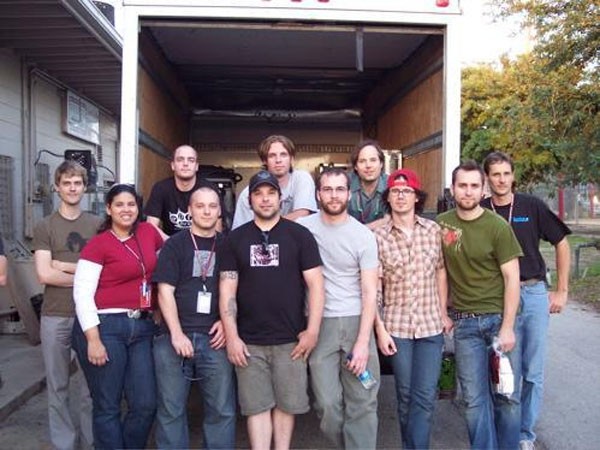 Across the street from the 7-Eleven on Corrine Drive and Winter Park Road, nestled between Junior's Diner and a run-down shoe repair shop, rests Orlando's long-standing, independent record store, Park Avenue CDs. The view from the parking lot reveals nothing more than a lit-up store sign and blown-up Bright Eyes and Foo Fighters album covers hanging in the windows. The whir of passing cars and menacing smell of fumes disguise a simple yet undeniable truth: This vinyl-filled community hang is entirely unique among even the top-tier record stores in the U.S. thanks to a unique collaboration that could only exist in Orlando. The evidence lies within a series of CD releases titled Live at Park Ave, the result of a partnership between the store's management and select recording arts students and staff at Full Sail University that began in 2005.

It works something like this: Matt Gorney, Full Sail's music history course director, and Darren Schneider, advanced session recording course director, team up with PACDs manager Shellie Olszewski and owner Sandy Bitman to record certain in-store performances. Before the guys at Full Sail even step into the equation with their state-of-the-art equipment, Olszewski, amid coordinating all the other details for the regularly scheduled in-stores, attempts to also get the band and their label and/or management to agree to a live recording. Once they've agreed, Gorney and Schneider plan their end of the deal. (The university itself stays entirely clear of the recording negotiation process.)

They choose four students - through a competition in Schneider's advanced recording class in which the students write an essay meant to essentially sell themselves to an employer - to work the in-store as assistant engineers and gain professional credits that they can place on their résumés before graduation - a leg up that most Full Sail grads won't have. Schneider acts as the recording engineer, Gorney takes care of pre-production details between the artists and the engineer, and both of them guide the students through the process, directing them to run cables, set up the stage or simply sit back and observe.

It's almost intimidating to watch the crew in action: Half a dozen gear-heads gather around wide mixing consoles with hundreds of buttons and settings and lights; the artists, meanwhile, stand squeamishly on a stage that unfolds beneath the metal scaffolding near the front of the store, often shaken by the high quality of what they'd assumed would be an average, intimate performance.

The final result is a professionally engineered and mixed-down recording of the show, and it's delivered to PACDs and the bands at no cost. The only thing Full Sail asks is that credits are given to Gorney, Schneider, the students and, of course, PACDs.

"We don't charge the record companies any money. We don't ask for points, we don't ask for royalties," Schneider says. "We just literally hand them a clean record and say, ‘Do you what you wanna do with it.'"

When these bands and their labels see the nearly unprecedented quality of the in-store setup and the recording process at PACDs, they tend to go back for more.

"It's definitely getting easier to book these bands as we build up this nice stable of recordings," Olszewski says. "And obviously the Full Sail name helps a lot. These touring bands or management are really familiar with the Full Sail brand and what they can provide. It's such a professional setup. It's head and shoulders above 95 percent of the other stores that the bands play. Every single time, someone can walk in here and see that they have a 64-channel mixing board. Some bands show up for in-stores [at other record shops] and it's literally a mic and a PA in the corner, whereas we have this professional, elaborate setup - a 9-by-12 stage and a team of Full Sail students and staff to engineer."

One label, Side One Dummy, took the bait early on, realizing just how golden an opportunity this is for artists. After their first encounter, they returned to PACDs full force, releasing the Gaslight Anthem's 2008 in-store performance and Fake Problems' 2009 in-store. They sent Fake Problems back earlier this year for another recording. Side One Dummy isn't alone.

"Frankly, the labels that get it really get it," Gorney says. "And they come back again and again. Some labels are less aware, but we have major record labels - as well as independent labels - that want to do this with us."

Not every artist jumps at the chance, however. Last week, Bonnie "Prince" Billy, aka alt-folk singer-songwriter Will Oldham, played a free in-store at PACDs as part of his Free Florida tour. Naturally, both the store and Full Sail were anxious to record the highly respected artist, but Oldham declined after about six weeks of coordination between all parties.

"This is probably the first time that I've gone through and had everything scheduled and then had somebody just not be cool with it," Olszewski says. "I think [his record label, Drag City] checked with every single person but Will."

"We considered the idea," says a Drag City rep via email, "and while Bonnie thinks that the Full Sail concept is a radical and great one, these shows are meant very much for the audience that is present, and no other. So there won't be any documentation, only memories. We're inspired by things that you can only remember, with no other forms of recall. Moments in time rule."

Still, with bands like Porcupine Tree and solo artists like José González, big-time, national touring acts are looking to capitalize on this opportunity in increasing numbers. The quality of Full Sail's equipment - they flaunt everything from a 32-channel console to a Pro Tools HD System, with microphones from Neumann, AKG and Shure - continues to draw big names that have agreed to record with them like Manchester Orchestra, Snow Patrol and Yann Tiersen. When Porcupine Tree came to record their in-store in 2007, the band's singer-songwriter Steven Wilson was hesitant to trust Full Sail's abilities at first.

"Wilson does all their production all the time," Schneider says. "And [their people] were like, ‘We'll just send the tracks to Steve and he'll mix it and put it together.' But [Wilson] ended up releasing our version of it, which apparently hadn't been done in the past. So the quality that we're giving people is above and beyond - even incomparable to - some of their records."

Aside from the brand validation that comes out of the process for both Full Sail and PACDs, the in-store recordings also support - echo, even - the broader efforts of the Coalition of Independent Music Stores, a group of about 45 independent record stores in the U.S. that banded together in 1995 to help strengthen their market value in retail and to support each other's efforts to keep such customer-pleasing shops alive and prospering.

PACDs is one of only three record stores in Florida that's a part of CIMS, and Bitman is on the coalition's board of directors, which has made the process of releasing their in-store recordings even easier. Nearly all Live at Park Ave recordings have been released through Junketboy, a distribution company owned by the coalition that specializes in getting exclusive releases just for independent music stores.

It's not just friends helping friends in the Orlando community, then, but across the entire independent music industry. Bitman's working relationship with Rand Foster, owner of California-based record store Fingerprints (also part of the CIMS), is just another example of that widespread alliance.

"Sandy's actually really great friends with Rand," Olszewski says. "Those guys bounce ideas off each other and we really work together with them. We even have a joint release: the Matt Nathanson album. They took tracks from Nathanson's in-store at Fingerprints and tracks from our in-store as well. I definitely see Fingerprints as our sister store on the West Coast. Same ideas, same vibe."

That Nathanson album, Left & Right: Live at Fingerprints. Live at Park Ave, was released in 2008. Other CIMS stores are releasing live recordings, too, by artists as diverse as Ben Harper and Pearl Jam. Those shops, however united by the coalition and a common mission, lack PACDs' secret weapon: Full Sail.

"I and other people have tried to replicate that model unsuccessfully," says Paul Epstein, owner of Denver's Twist & Shout Records. "Full Sail is a good school with what seems like a pretty progressive attitude. I've tried with the schools around [Denver], and I've had a number of people say they're going to do it and then they flake. They'll do one or two and then they don't. I've had to, almost every time, go outside to get the recording done."

Even PACDs' "sister" store, Fingerprints, is forced to hire outside engineers to produce a professional recording of their in-stores. Where these stores lose money on recording the in-stores, PACDs gets the albums entirely free.

"Matt and Darren don't get paid for these extra hours," Olszewski says. "They're working on their own time to come out and engineer these recordings."

Money is not even the biggest worry for owners of other independent record stores, though. Epstein emphasizes that the loss of opportunity for students is even harsher than the loss of a free recording.

"Park Ave has such a great school working with them and sticking with it. It's been hard to get anybody. There's no money involved for them. They've gotta come out here, do it on spec kind of, and I haven't been able to convince anybody here that this is an incredible educational opportunity," he laughs. "Sandy did, and he's got a good thing going."

"What we're doing has nothing to do with business," Gorney says. "We just want our students to have an opportunity to hit the ground running. In some cases, students end up with a pro credit on a released record before they leave the school. That's pretty great."

Whether or not other record stores have been able to find a setup as valuable as Park Ave's partnership with Full Sail, they're all chugging forward with at least one unified goal in mind: Keep the independent music stores alive and relevant.

"The independent music stores help each other - that's why the coalition is together," Schneider says. "I try to encourage the students to get involved with that. And this is not a classroom thing. This is, ‘You're gonna go out and be an assistant engineer on a real recording.' We don't treat it like a lab. I try to explain to them: When they leave Full Sail, every student's got the exact same résumé."