Painting by Sunaura Taylor 'Self Portrait With Manatee'

"What if we went the opposite way of rush and grasp and push and leap, but instead to sea level, to slow, to soft slopes?"

Amber DiPietra's Opposite of Evolution Dance Studio, an interactive, choreographed performance, considers disability, presence and embodiment in space through an experience of shared, slow movement. The March 9 performance at Rollins College, organized by Burrow Press, was the second iteration of the piece, which debuted at the Tampa Fringe Arts Festival in 2018.

In each performance, DiPietra responds to current influences, including the often inadequate disability infrastructure and stagnant disability rights movement of Florida, and the way her own embodiment shifts and varies from day to day. Recently, DiPietra has been swayed by a particular gesture evoked in a painting by painter and disability activist Sunaura Taylor.

While DiPietra intentionally avoided privileging the visual in her performance and instead aimed to create a participatory somatic experience that could be accessed through multiple forms of sensory and bodily engagement, she described the painting by Sunaura Taylor as helping her "create a container" of the physical and formal constraints of the improvised performance. Taylor's painting and an ambient soundscape composed by DiPietra's stepmother contributed to the immersive sensory experience of the performance. 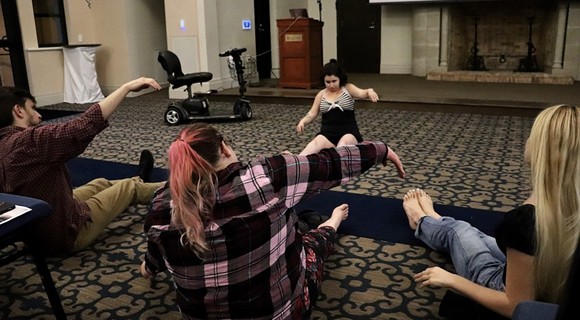 DiPietra described the performance as the creation of a "flexible, improvisatory container of movement," considerate of how her disability informs a "constrained sense of embodiment" in her own experience of physicality. DiPietra, who works in multiple disciplines and fields, is interested in "how performance art can be received in other bodies," and has chosen this particular avenue of expression as a way of centering her disabled body. DiPietra's work as an intimacy coach for people with disabilities, as well as her disability rights activism, also seem informed by a concern for different experiences of embodiment.

Opposite of Evolution Dance Studio is DiPietra's response to her experiences navigating the frequently inhospitable Floridian infrastructure as a person with disabilities.

"I decided to focus on the politics of showing my body as a performer, instead of trying to work through a broken system," says DiPietra of her approach to her practice after moving from San Francisco, California, back to her native Tampa Bay area. "My show is more about meditating on bodies, how and where bodies get stuck, who is visible, who is not."

After the performance, Sabrina Dalla Valle – a writing teacher at Ringling College of Art and Design in Sarasota – conducted an interview with DiPietra and facilitated a question-and-answer session with the audience.

"Do Florida waters only 'heal' people with cars and 'normal' legs?" DiPietra asked half-rhetorically in our phone interview. The Opposite of Evolution asked this question and others, including: What creativity unfolds when you're lying down or floating? Do you have your best ideas gliding sideways through a dream just before waking up? What if we let all bodies into the choreography?