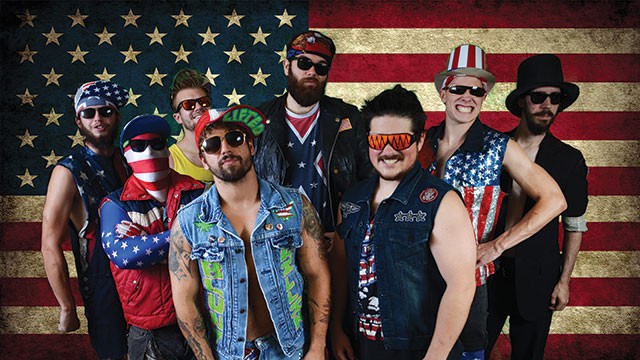 “Pussy, broads, drugs, beer.” That’s what Orlando revel-metal act American Party Machine is in it for, according to singer Mack Studley. “If we can get money out of it sometimes, that’s good.”

American Party Machine is probably the region’s most deliberately stupid band. But even if their intent is as blunt as they say, there’s too much acuity in their rock & roll burlesque to dismiss easily.

Although the act formed three years ago, the core players have played together since their days in the early 2000s at East Orlando’s Timber Creek High School. APM began as relief from their more serious death-metal backgrounds in bands like Abdomen Canvas.

“We were at the practice space one night and started jamming to Southern stuff,” Studley says. “And we thought it would be hilarious to start ‘a patriotic Gwar’ is what we called it, and then it took on a life of its own.”

What materialized was an elaborate internal universe with a rock gang of characters (now eight strong with Studley, guitarists Swisher Sweets and Humphrey Bongart, bassist the Sesh, drummer George Moshington and hype men Pat Riot, Uncle Slam and Abro-ham Drinkin). Like a living comic book, their mythos involves webbed backstories that explain how they formed a rock & roll band to pay off the mountainous debt of their addictions.

APM will release their new album, Never Forget, on, of course, July 4. The release is overflowing with their trademark riffs and vulgarity. “It’s just as dumb as we can get it, like party stuff,” laughs Studley. “It’s horned up.”

“We want to be close enough to a hair metal band, but not the gay part of the hair metal band,” says Sweets, the male-stripper persona who wears Daisy Duke nut-cutters onstage.

Though Gwar is their model, APM lands somewhere between Valient Thorr’s Southern kick-ass and the Dwarves’ campy obscenity. In other words: something seemingly impossible to take solemnly. Yet, some do.

“The PC punks, they hate my guts,” says Studley. “Regardless of [whether] what we write in this band is actually what we represent as human beings, the fact that I’m out there propagating the stuff is enough to hate me.”

APM’s native metal community has even derided them for being a gimmick band. For all their cartoonish bluster, the keen absurdist sense at work that’s mastering the band’s concept seems to elude some in more academic circles. “It’s funny how these people that consider themselves uber-intelligent can’t catch on to parody or humor whatsoever,” Studley says.

Still – even though he says things like, “Every time I write a song, I try and put a pinch harmonic in to see how wet I can get a girl” – Sweets insists they’re at least serious about their songwriting, always gunning for real hook, drive and groove. “I’d love to be a 100 percent joke and still kick ass,” he says.

But the visceral appeal of their stage show – known for things like backyard wrestling, confetti cannons, beach balls and reliably extreme buffoonery – is difficult to debate. “We want to have that arena production but on the smallest, cheapest scale that we can,” Studley says. “We try to add a different element every time we go out.”

Does APM’s subversion undress the conceit of art or are they just a cannonball of good old-fashioned showmanship? When it hits this big with pure entertainment value, it almost doesn’t matter.

“On a level, it is retarded,” Studley concedes. “We are grown men in spandex singing about America. But it’s no more retarded than a Toby Keith concert.”