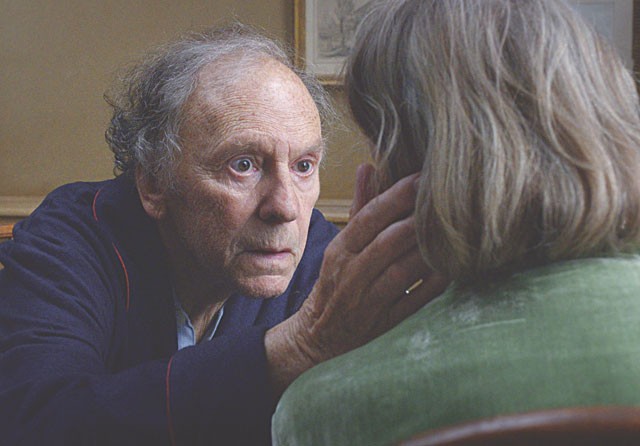 You will hate Love – that is, Amour – but you may, nevertheless, walk away from it with an odd respect for Austrian writer-director Michael Haneke. After all, he has managed to create an exasperating, boring, inspiring, perplexing, honest film from just two great performances, no musical score and an almost total lack of action and camera movement.

The minimalist story focuses on an elderly Parisian woman (the brilliant Emmanuelle Riva) who is slipping into paralysis and dementia. Her husband, played tenderly by Jean-Louis Trintignant, is left to care for her, struggle with wrenching life-and-death decisions and address the concerns of their daughter and son-in-law.

"Nothing in this life that I've been trying can equal or surpass the art of dying," George Harrison wrote. Haneke undoubtedly would concur, and he has tried desperately to create something that mimics the art of human existence. But is his creation a masterpiece on the scale of Mother Nature's, or even a great film?

The answer is no, despite the praise of critics and Academy of Motion Picture Arts and Sciences members, who have made it the first foreign-language movie nominated for best film since Letters From Iwo Jima in 2006, and only the ninth ever. Amour is also not great entertainment, which Haneke himself might agree with. It's strikingly serene at times, mimicking the visual style of Japanese director Yasujiro Ozu and the emotional style of Sweden's Ingmar Bergman, and the slow pace and long running time might even be called pretentious. In addition, it's neither as shocking as the director's Funny Games nor as beautiful as The White Ribbon.

Equally surprising is our lack of personal connection to the characters. Replacing that deep connection and emotional bond are numbness and nothingness. (But perhaps that's what Haneke wanted for his audience, as those feelings often accompany tragedy.) The film also is devoid of suspense, as the framing device used by Haneke leaves little doubt about the outcome.

Addressing that latter point in an interview with Karin Schiefer of the Austrian Film Commission, Haneke said, "[The framing device] is an efficient way to begin a narrative arc, and it was an obvious choice in this case. … Why should I play with the uncertainty of the conclusion?

When [the outcome] is a certainty from the very beginning, this false narrative arc is unnecessary."

It's difficult to argue that point. Indeed, it's hard to heap criticism at all on a film that bares its soul in such a real way. So perhaps one is left to ponder simply whether it's worth watching, or whether it illuminates the human condition? Probably so, but what you get out of it depends on what you bring into it – your experiences, your psyche, your aesthetic preferences – thus making Amour as much a comment on film as on aging.

This type of moviemaking is best summed up by Haneke himself, in the aforementioned interview: "Journalists want answers to the questions I pose with my films, but the members of the audience should be posing the questions."