Fans of Creative City Project in years past were treated to a new use of our downtown. Orlando's hot concrete sidewalks softened a bit to nurture artistic expression, and art and music got a chance to blossom when the work day was done. But this year, Creative City Project takes over a swath of downtown on a Saturday night, and the number of artists is bigger than before, an immersive feast for the eye and the ear. Artists in all disciplines will line Orange Avenue, performing in settings that allow audiences to see their art up close and personal.

The brains behind Creative City Project, Cole NeSmith, speaks to us breathlessly in between final-countdown craziness. "Compared to last year, we've upped our game and the public will see some amazing and experimental things," he says.

With new sponsorships, Creative City Project 2015 will have more bandwidth. NeSmith has staged eight different venues for artists and musicians, with sidewalk installations in between. This year, viewers can venture into a maze of 10 art trucks, with artists beckoning you inside to see their installations. The "Ryder Interactive Village" hosts dancers, painters, makers, graffiti artists, poets and even NeSmith himself, who will direct a sound and light show through filtered haze within one truck's interior. 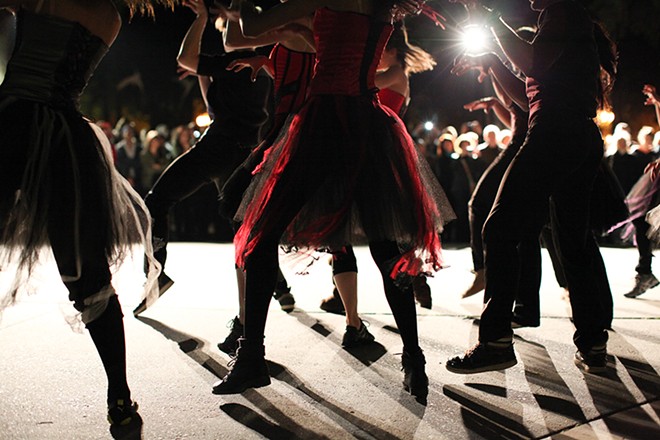 "There's no doubt that this year is a big step forward from last year. We've continued to develop the interactive and immersive elements," he says. "We want to give people experiences they can't have anywhere else ... and people will definitely notice an increase in size and scale when it comes to the production value of the performances. We're continuing to grow with the size of our audience while maintaining a value for intimacy – getting people as close to the art as possible."

A Celebration of Latin-Hispanic Culture kicks off the event on the North Mainstage on Orange near Jefferson Street, after which Ravé Mehta's Flow dancers, the Cook Trio, Orlando Ballet, 2nd Sight Dance and more follow. At the same time, on the Fairwinds Stage anchoring the south end of the festival at Orange and Central, the Human Experience will crank it up, followed by USA Dance, Selah, Renaiszance EDM group, the Mud Flappers, Cirque du Soleil, Emotions Dance, the Red Bull BC One B-boys and many more. You'll just have to choose where to start shaking it and then work your way to the other end. Downloading the Creative City Project iPhone app will help keep you on track.

In between, several more stages and stations intervene. At Washington Street, the 100-player CFCArts orchestra will be spaced far enough apart for pedestrians to wander between violas and trombones, an intimate way to experience classical music; later in the evening, Masami Koshikawa reprises her Butterfly Woman performance from Art in Odd Places, within a vignette of Japanese dance and poetry. At Wall Street, Deborah Knispel will present a human tableau re-creating Gustav Klimt's famous painting "The Kiss." The silk dancers of Orlando Aerial Arts will sway above Orange Avenue at Robinson Street. Between Central and Washington, Orlando City SC players will create a mural by kicking paint-dipped soccer balls at a wall.

"We believe that the Creative City Project can shape the global perception of our city as one known for creativity and innovation," NeSmith says, though he admits, "Being the linchpin for hundreds of artists is sort of intense." So artists will claim, for an evening, their right to the city, and there is nothing stopping us from extending this claim a little bit longer.