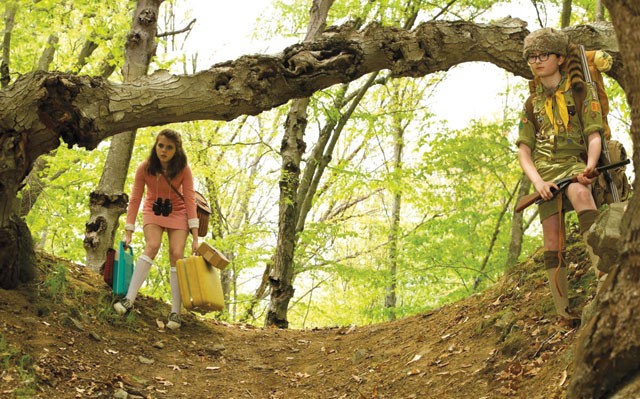 When Wes Anderson was last at this banquet, offering up a feature film in his own singular style, he faced a baptism by fire, both from critics and fans alike, waiting to shout "hipster crap!" to the first person who would listen. "Too quirky! It's The Royal Tenenbaums on a different continent! And the damn soundtrack!"

To his credit, though, he came through relatively unfazed, first delivering the stop-motion wonder Fantastic Mr. Fox and now the throwback first-love tale, Moonrise Kingdom, once again dipping into his familiar tropes like he just don't care.

His seventh film, Moonrise Kingdom, presents a simple story: A boy and a girl, Sam and Suzy (newcomers Jared Gilman and Kara Hayward), both young, both outcasts who are occasionally prone to violent outbursts, fall in love. The pair, feeling their home lives caving in on them, decide to run away to make that love work within the little bit of space they can carve out together before parents (Frances McDormand and an absolutely show-stealing Bill Murray), troopmasters (Edward Norton, Harvey Keitel) and Johnny Law (Bruce Willis) can catch up and tell them they're too young.

It's a nice story to think about, and many people will find it to be a story they've been thinking about in some shape or form since they were 12, too. There's been some suggestion in the ether that the film's premise doesn't necessarily work because kids don't fall in love like that, not that deeply, not that young. And not all kids do, but it happens. The plot description suits my fifth-grade classmates Andy and Zoë as much as it does Sam and Suzy. Andy and Zoë, occasionally violent outcasts themselves, were able to convince enough people of their love that when they got "married" during a spring recess after lunch, nearly every kid from fourth and fifth grade followed them in a mass procession around the schoolyard as the teachers watched in awe. Much like Khaki Scout Troop 55 – which views Sam as a mortal enemy – eventually comes around to Sam and Suzy's side, becoming their protectors, we came around to Andy and Zoë's side, too, in the face of such a mad display of love.

That kind of display has to be respected, maybe even envied. As torturous as those years are, these are the kinds of moments you can look back on without a stomach ache, and Moonrise Kingdom hits on this with every stride. Anderson's woodsy thought process doesn't necessarily evoke a true childhood moment for all, but elicits a thorough batch of the rainy summer daydreams where most grand childhood adventures and romances are so often had: in heads and hearts, if not in flesh. Maybe that's the truer evocation of childhood, anyway, because the best part rests within the imagination. It's the things we wish we could do, before we really know why we can't do them: fly like Superman, draw like John Romita Jr., swing like Ken Griffey Jr. or just be able to talk to your crush without dropping dead right on the spot. They're all equally impossible at that age, except in our heads – and in our movies.