Marvel reboot fails to improve on much of anything 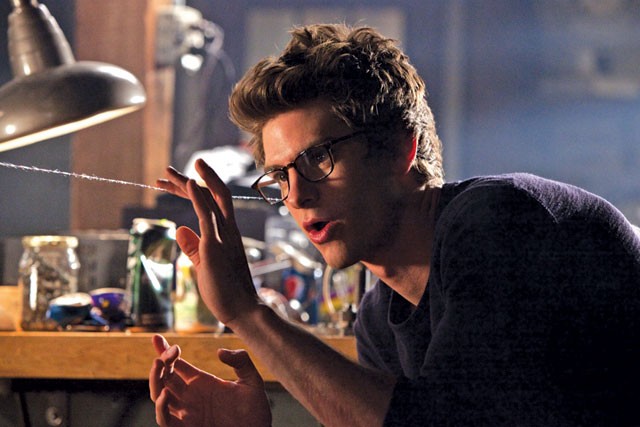 A prominently placed poster touting Einstein's declaration that "imagination is more important than knowledge" is just about the only thing that passes for a ballsy move in a film fearful of both qualities. A rights-retaining reboot after Sam Raimi and company walked away from a financially successful, mostly satisfying trilogy, The Amazing Spider-Man offers up a younger cast and a tweaked origin story for the web-slinging superhero, but little else distinguishes it from its predecessors.

Peter Parker (Andrew Garfield, The Social Network) is a tech-savvy loner with a skateboard, an orphan complex and a crush on Gwen Stacy (Emma Stone, technically replacing Bryce Dallas Howard while essentially replacing Kirsten Dunst). One ill-fated trip to Oscorp sees the teen befriending one-armed genetics whiz Dr. Curt Connors (Rhys Ifans) before being bitten by a very special spider and turning into a limber bully-buster, one suitably equipped to fend off Connors in the wake of a similar, more reptilian transformation.

Even in the hands of credited screenwriters James Vanderbilt (Zodiac), Alvin Sargent (Spidey 2 and 3) and Steve Kloves (most of the Harry Potter adaptations), and hypothetically divorced from the preceding films, the majority of Spider-Man's 135 minutes succumb to a checklist rhythm of mishaps, revelations and climactic countdowns. Characters generally speak in either dumps of exposition or frustratingly literal maxims, and the obligatory mid-credits stinger hardly gooses the bumps. The iconic death of sage Uncle Ben occurs at the hands of a different thug, whose crime initially spurs our hero to vigilante justice, but that plotline is soon abandoned – much like the prologue teasing out the mystery behind the death of Peter's parents – in favor of old-fashioned supervillainy. (Both plot points are then shamelessly lined up for a sequel, as is the suddenly shadowy presence of one Norman Osborn.)

Graduating from the small-scale rom-com antics of (500) Days of Summer, director Marc Webb tries to emphasize Parker's home and school life as he grows closer to Gwen and further from the care of Aunt May (Sally Field) and Uncle Ben (Martin Sheen), but Webb struggles to maintain much tonal consistency between the aw-shucks beats and the action sequences. Once torn away from the swoon-happy and convincingly resourceful Stone, Garfield's performance shifts from angst to pith to stoicism as the plot jarringly demands it. In some scenes, his wisecracking charm outshines Tobey Maguire's portrayal; during others, one wonders if this was the best moment to reprise his somber breakout role from 2007's Boy A. Ifans' mad scientist volleys in kind from the burden of noble intentions and reckless science (read: Alfred Molina's Doc Ock) to potential psychological instability (with literal echoes of Willem Dafoe's Green Goblin).

The airborne acrobatics and grounded fights often boast a strong sense of visual flair, embellished with the sporadic use of first-person perspective as Spider-Man swings through the city, but slapstick bits, skateboarding montages and city-rallying scenes in between border on groan-inducing, while James Horner's grandiose score proves equally ill-suited whether used against an intimate confession scene or an ostensibly tense moment involving a kid in peril beneath the Williamsburg Bridge. Critical emotional stakes prove to be nonexistent once a plan to transform New Yorkers into a veritable army of Koopas raises its ugly head, and even when the dynamics of Parker's homemade web shooters are smartly exploited in a high school-set melee, it can't come without the film kowtowing to two especially tired tropes of the genre: the oblivious-bystander moment and the requisite Stan Lee cameo.

Toward the end, an English teacher explains that, for all the claims that there are only about 10 plots for all fiction stories, there's really only one. After this bout of derring-do déjà vu, it's hard to disagree.