Nolan's bat-finale reaches the top rung on the ladder 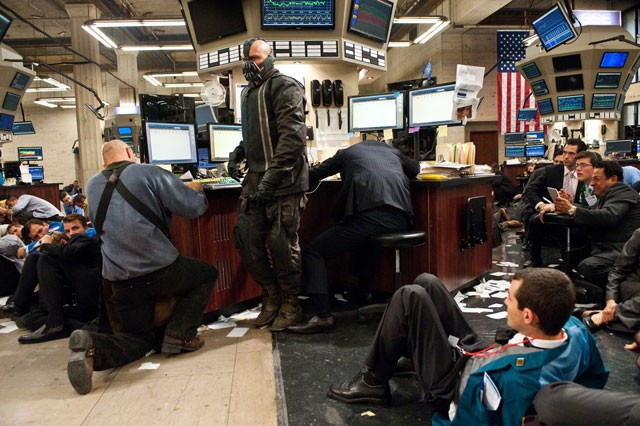 Christopher Nolan’s Batman Begins (2005) was structured around a simple question: “Why do we fall?” The answer, as the movie didn’t tire of telling us, was “So we can learn to pick ourselves up.” In wrapping up his Bat-trilogy, Nolan turns that question on its head: Why do we rise? What does it mean to attain our full potential, and who reaps the real, final benefit?

Eight years after the events of The Dark Knight, Bruce Wayne (Christian Bale) is living as a recluse on the outskirts of a Gotham City transformed. The Big Lie he orchestrated for the sake of the public peace has had its intended effect: Spurred on by the population’s untarnished memory of District Attorney Harvey Dent (and some convenient rolling back of the rights of the accused), the police have managed to end organized crime in the city. One-time gangbusters have inherited far more mundane duties, to the point that “wartime cop” Commissioner Jim Gordon (Gary Oldman) is staring obsolescence squarely in the face.

Yet while Gotham no longer needs a Batman, the attendant absence of Wayne turns out to have been sorely felt. He’s taken a hands-off approach to the administration of his financial empire, allowing the funding of some of his pet philanthropic projects to lapse. That oversight clears a path for the arrival of Bane (Thomas Hardy), a muscle-bound international terrorist who lays siege to Gotham and begins raising an army of the dispossessed and disenfranchised. Tip-toeing through the carnage on stiletto heels is crafty cat burglar Selina Kyle (Anne Hathaway), who fancies herself somewhat of a latter-day Robin Hood but instead seems to rob from the rich mostly to advance her own interests.

On paper, that setup seems to invite all sorts of Occupy-bashing – God knows I was afraid of it – but the story Nolan has spun with collaborators Jonathan Nolan and David S. Goyer lives up to their stated intention to examine class warfare on a more Dickensian level. Sure, it’s disquieting to see so many Gothamites turn looters at Bane’s invitation; it’s not entirely in line with **The Dark Knight**’s thesis that the average Joe can only be pushed so far toward barbarism. But the new movie carefully establishes that a pseudo-populist manipulator like Bane would have no recruits had Wayne and his ilk not forgotten the responsibility that comes with their good fortune. You let the foundations rot, you can’t complain when the stench reaches the beams in the master bedroom.

The notion of the upward climb is a central motif of Rises. The visual image of a human being emerging from a deep hole gets repeated play, as does the juxtaposition of subterranean prisons with penthouse boardrooms. The rapidity with which the film switches from one such environment to its opposite shines a harsh light on the concept of social advancement and what it means to “do better.” Selina’s quest, for example, is to obtain the Blank Slate, a technological wonder device that wipes all record of a person’s history – and in her own case, past mistakes – from the cloud. What better metaphor for a generation that not only won’t do as well as the one before it, but can see its employability obliterated by an errant tweet?

The Dark Knight Rises covers such ground so compellingly that one almost forgets how brilliantly performed and photographed it all is. The hour or so of IMAX footage makes even the bleakest scenarios look sumptuous; Hathaway’s charismatic grifter masquerades are a real revelation; and Bale, in particular, turns in his most empathic performance of the trilogy. Even with two-thirds of his face obscured by the batmask he eventually dons, he makes us feel the passion and the pain of a man who’s desperate to transcend his past failings.

Wayne resolves early on to join the battle anew; almost as quickly, he realizes that throwing his aging, battered body into the ring against Bane might entail paying the ultimate sacrifice. Yet nobody around him – least of all his ever-more-conflicted butler, Alfred (Michael Caine) – will let him make that sacrifice for the wrong reasons, and without understanding just what it means. Mere martyrdom isn’t good enough; it’s too close to masochism, and to all of the other mindsets that are the egocentric’s substitute for virtue. Forget the lust for personal glory that drives too many pulp entertainments – too many comic books, in other words. The Dark Knight Rises finds its irresistible dramatic pull in the just-in-time idea that making more of oneself isn’t just a way to dispel personal shadows, but to contribute to the common good.

Why do we rise? So we can turn right around and lift up everybody else.