Angel Olsen keeps her torch lit, even after a marathon 2014 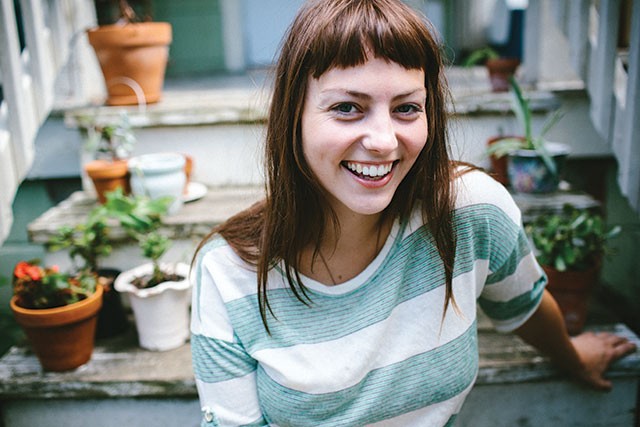 Busy is an understatement in reference to Angel Olsen’s 2014. Her fantastic sophomore album, Burn Your Fire for No Witness, earned near-universal praise upon its release in February. Her enigmatic voice – NPR called it one “of confounding power” – and entrancing stage presence wowed crowds at major festivals, tiny clubs and every venue in between. She graced the cover of Spin and the pages of mainstream publications like Vogue. She and her band even toured through Europe four different times.

Such a whirlwind year came with its drawbacks, though. In September, she fell ill while touring between Zurich and Bologna; by mid-October, when she chatted with Orlando Weekly by phone, she was still coughing and clearly under the weather. “If you just go all year, you’ll eventually get sick,” she laughs. “But I definitely wanted to work hard. You never know whether it’s going to last – whether you’ll ever get the opportunity to tour in Spain and Italy again – so I took advantage of it. I don’t know if every year will be like this, but I wanted to live in the moment. Even if a lot of my friends think I’m crazy for traveling so much.”

Thank goodness, then, that Olsen and her band have still chosen to cap the year with a mini-tour through the Southeast, similar to a solo run Olsen took last December. It’s partly due to geographic proximity – she moved to Asheville, North Carolina, last year – but also to how much fun she’s had in the Sunshine State. “A lot of people don’t play Florida, but I’ve had some really good shows there,” Olsen says. “I thought I should bring my band this time. Plus, it’s going to be warmer there in November than where we all live.”

Olsen credits that band as a big part of this year’s success. Fans and critics first warmed up to her folk-based solo format and alluring vocal inflections – part warble, part croon, part floating falsetto, part otherworldly non-verbal mantras – on 2012’s Half Way Home. But Burn Your Fire is far looser, jazzier, psychedelic, even dipped in the crackle of classic country. It’s as if this torch singer finally found the tools to fan her proverbial flame. “It was a natural progression for me,” she says of recording and touring with a full band for the first time. “It feels like I’m part of a family now. And we have a good thing going. Whenever I write something new, I think, ‘Can I show them new material? Will they even be interested?’ Then I bring it up at sound check and everyone starts jamming. That [process] is really necessary.”

It’s also one that didn’t seem likely given the experimentalism of Olsen’s first recorded effort, Strange Cacti, and the introspective intensity of her songwriting on Half Way Home. In many interviews conducted between the end of that album cycle and the release of Burn Your Fire, she said she felt overly protective of her songs. But Olsen believes that outlook has shifted over the last 10 months as she’s played them far and wide. “Different songs bring out different characters in me,” she says when asked about the personal nature of her music. “But I don’t feel embarrassed or protective of the songs anymore – or weirded out by sharing them with so many people. I feel like people can find their own stories in them.”

Olsen’s remarkable story started when the unknown Missouri native caught the attention of creative eccentric Will “Bonnie Prince Billy” Oldham in 2010, which led her to strike out on her own in 2012 and then rocketed her to indie fame in 2014. So what’s the next chapter? She isn’t quite sure – but she seems fully at peace with such uncertainty. “This year went by really fast,” she says with wonder. “And just when I find a moment to reflect on it, I have to get all my energy ready for the next tour. So I’m pretty tired. But the good thing is I’m not tired of writing or singing. Sometimes when I get home, a week will go by where I don’t want to hear anything or sing anything and I think I need to take a serious long-term break. But then it comes back, which is reassuring to me.”

When asked about new material, Olsen plays it even coyer. “I have music that I’ve been recording, but I don’t know when anything will be ready. I think it’ll take me some time – and I know it’ll be much different than [Burn Your Fire], just like that moved forward from [Half Way Home]. A lot of labels and people in the industry would promote an artist who’s ready to put out records every year. But I don’t want to put out shit.”