On the prowl in Hannibal Square 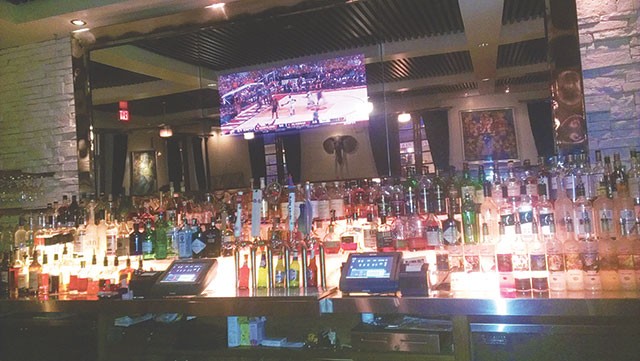 What’s it supposed to mean when you describe a neighborhood as “pretty”? It’s one of those vague adjectives along the lines of “nice” or “cool,” yet that’s the word that first came to mind when I arrived in Winter Park’s Hannibal Square to meet a few female friends for a night of pub crawling.

I was relatively new to the area, having spent more time on the Park Avenue side of Winter Park, and had never partaken of Hannibal Square’s drinking scene. While these few blocks of New England Avenue lean more toward restaurants than a pub culture, the not-so-busy ’hood certainly keeps up with the “see and be seen” mentality of its trendy Park Ave. counterparts.

“This is a total cougar bar on the weekends,” one friend announced as we grabbed a table near the crowded inside bar at Dexter’s (558 W. New England Ave.). We were out on a Tuesday night, yet I did, in fact, notice a sizable number of women hovering around the bar area as we ordered from the happy hour wine and cocktail menu: a Dirty Dexter martini ($8, with hand-stuffed blue cheese olives) for one of us, a Crown Royal Manhattan ($8.25 – and no cherry, mind you) for another and a Blood Orangetini ($8, topped with champagne) for me.

While our drinks were flavorsome and the bright, art-filled walls looked pleasant, Dexter’s noisy inside area proved difficult for chit-chatting. Next time I would opt for an outside table.

Nevertheless, we were primed for our next drinking spot, so we marched a few steps across cobblestone New England Avenue to Fresh (535 W. New England Ave.), a cozy, down-to-earth spot where we split a bottle of red wine (a French one: Chapoutier’s Côte du Luberon La Ciboise); Fresh offers a short but serviceable wine list as well as Orlando Brewing beer. “I wish I could live here,” one of us commented, as we adored the heavy wood tables and dream-pop background music. But, as calming as this place was, we knew we couldn’t stay forever – we had more crawling to do. So after finishing our glasses of wine, we headed east.

We weren’t planning on stopping at Hannibal’s on the Square (511 W. New England Ave.; pictured above); it seemed a bit stuffy for our taste, with its swanky chandeliers, couch art and literally glowing bar (it’s lighted from within), but we somehow found ourselves in one of those “c’mon, just one shot” type of situations.

After all, allegedly, Hannibal’s is where a nasty catfight went down on VH1’s reality TV show Basketball Wives. We decided it was only appropriate to pay tribute to that infamous moment by downing a round of lemondrop shooters. Thankfully, we dipped out long before the bar’s elevator music and the peering elephant on the wall drove us to insanity.

We walked a short way down New England Avenue and landed at BARcelona (433 W. New England Ave.), a comfortable outside bar space behind Spanish restaurant Mi Tomatina, where our friendly waiter arrived with the line, “Do not fear, Paul is here.”

It happened to be Tapas Tuesdays, so we ordered glasses of red sangria ($8, with rosé champagne and chopped apples) and Spanish tapas ($4 on Tuesday’s special menu) – croquetas, empanadas and the like. While I was looking for a better variety of fruit in my sangria, what I needed to keep an eye on was the bill – we were almost charged regular price for our snacks. Too many sangrias and you might not notice!

Nonetheless, we savored the inviting (and heated, since it was a bit chilly) outdoor spread at BARcelona, and the light bites we munched on proved a suitable ending for a night of pub crawling around the ever-so-“pretty” Hannibal Square.