Cozy up (or hook up) in downtown Orlando's bar scene 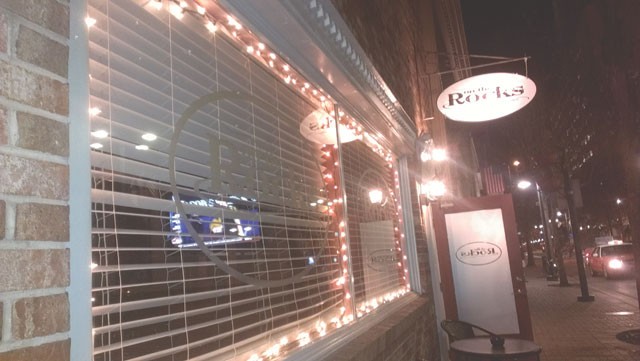 It was after a long, sweltering summer day on the beach at New Smyrna that my husband, Kenny, and I began our tradition of DIY pub crawling. The salt and sun (and probably the Red Stripes) had gone to our heads, and we didn't just want to sit around any old beachside bar – we wanted a drinking "adventure."

And the tradition continues.

Each month, I'll take you on one of my bar-hopping adventures. Lucky you! As I drink my way through Central Florida neighborhoods, we'll visit landmark establishments, as well as some newbies. Pull up a bar stool, and get ready to do some crawling.

Since this is my first go-round with the column (and since we happen to be nearing Valentine's Day), I brought along my husband (and pub-crawling partner-in-crime) for a trot around downtown Orlando. Our mission: to assemble a pub crawl full of romantic bars (I know, aww, sigh, barf!) as well as a few hookup joints.

First rule of pub crawling: Start with a stiff drink. We kicked off our Friday night at On the Rocks (13 S. Magnolia Ave.), where every drink is a double (3-ounce pours). We were one of the few patrons at the new(ish) digs, other than a small group of women down the long wooden bar from us (hint, hint, gentlemen), and the bartender offered a rundown of the extensive menu of cocktails and creatively named shots, which feature hand-squeezed juices. We opted for our signature "when-in-doubt" concoctions – Jack on the rocks for him and a dirty vodka martini for me.

On the Rocks might be facing something of a sports-bar/art-bar identity crisis (ESPN on flat screens and Morgan Steele art on the opposing wall), but it's certainly a suitable meeting place to calm the nerves for a first date – or, in our case, to serve as a starting point for a drinking date night.

Next, we had to decide whether we wanted to go to one of "our places" that we like to frequent as a couple, or go somewhere brand-new. With all the positive chatter we'd heard about the craft cocktails served at the Courtesy Bar (114 N. Orange Ave.), we decided to try something new.

Picture grandpa's liquor cabinet with a twist of hipster, and you'll get an idea of the vintage, grown-up ambience emanating from this space, with its brick walls and checkered-tile floor. The cozy half-booths along the wall made it easy to share a New York sour (Old Overholt rye whiskey, honey, fresh lemon, topped with Altos malbec) with my sweetie.

After a couple of drinks, not only do I turn into a Chatty Cathy, but I'm also usually in need of some sustenance. We were on the lookout for an apps-and-drinks kind of place for our next stop, but we stumbled upon Elixir (9 W. Washington St.) right around the corner. Food can wait! (Though, if you are really hungry, you could always beeline it to Eternal Tap at 116 W. Church St. for pizza and craft beer, or Downtown PourHouse at 20 S. Orange Ave. for bar food.)

When we walked in to Elixir, Hootie & the Blowfish's "Let Her Cry" greeted us, as well as a pleasant short-shorted female bartender. Nothing really set this massive room apart from any other downtown bar, so we knew one drink would suffice (and sometimes, that's for the best on these pub crawls), so we downed a couple of Goose Island IPAs and were on our way.

We decided to end our night at what I consider to be one of the sexiest bars in downtown, NV Art Bar (27 E. Pine St.). We had a round of sultrily named saketinis, including a Pearception (1800 tequila, pear sake, peach juice). Couples looking for a romantic retreat can make their way upstairs and find a votive-lit corner with a loveseat for nuzzling. Don't be shy – you'll fit right in with the other twosomes gathered inside this living room-style abode.

Here's where that definition of romance comes into play. You know, the one I mentioned earlier? Hanging out at a bar on Valentine's Day is sort of like going to one of those "stoplight parties." The question is: Are you red (taken), yellow (it's complicated) or green (single and ready to mingle)?

If you're the former, my drinking crawl should serve you and your valentine well. But if you're either of the latter two, or you're just really looking for some sweaty bathroom sex, no worries – downtown Orlando's got you covered. Head to hookup mainstays like Independent Bar, Vain, Chillers or, on any given block-party Friday or Saturday night, Wall Street Plaza. All of the above are full of hot young things, and you just might get lucky.