"Have you ever walked along a shoreline, only to have your footprints washed away?" legendary basketball coach Pat Summit once asked, describing her struggle with Alzheimer's. "The waves erase the marks we leave behind, all the sandcastles."

In The Father, it's an octogenarian named Anthony whose sandcastles are getting washed away. The character shares the name and birthdate of the actor portraying him (Anthony Hopkins), but the film is not biographical.

Instead, writer-director Florian Zeller based the drama on his 2012 Molière Award-winning play, Le Père, which tells the simple story of an elderly man whose mental faculties are deteriorating and who must face difficult decisions related to his long-term care. Nevertheless, in the hands of Hopkins, the protagonist feels starkly real, as if you're witnessing one of the cinema's greatest actors careen into dementia.

The cinema is full of studies on dementia, including recent standouts Still Alice, The Savages and Away From Her. But few films take a subjective look at the topic, putting the audience dizzyingly inside the mind of the character. The Father isn't necessarily the first to do it, but it might be the best. 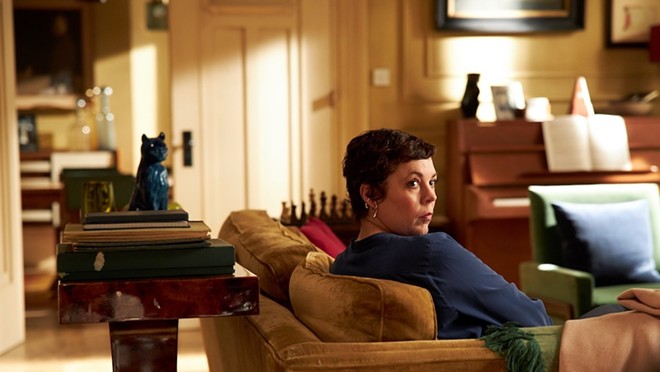 Surely Anthony is lucid and it's the world around him that is collapsing into lunacy, we posit. And yet just as we think we've solved Zeller's brainteaser, another twist arises, throwing us — along with Anthony — into an Escher-like existence of confusion and implausibility.

It amounts to a jigsaw puzzle that, when solved, reveals the best film of 2020.

Credit must be shared with co-writer Christopher Hampton, composer Ludovico Einaudi, cinematographer Ben Smithard, editor Yorgos Lamprinos and especially production designer Peter Francis, who — along with art directors Amanda Dazely and Astrid Sieben — create an environment just as surreal as any found in Inception or Doctor Strange. Anthony's world might not have the visual punch of the aforementioned films, but it ranks right up there with The Tenant and Rosemary's Baby on the creepy-apartment scale.

This won't be Hopkins' last film; the 83-year-old isn't even slowing down. But The Father, even more so than 2019's The Two Popes, feels like a career capstone. I just hope he can collect another Oscar to go with his award for The Silence of the Lambs. But, just as his superior performance in The Remains of the Day lost to Tom Hanks' zeitgeist-capturing turn in Philadelphia in 1994, the Academy might pass over his role in The Father to instead posthumously honor Chadwick Boseman for Ma Rainey's Black Bottom, as did the Hollywood Foreign Press.

Awards shows are, after all, more focused on sending political and cultural messages than recognizing artistic achievement. And that's not always bad, as Hanks' and Boseman's performances were — and still are — socially compulsory. But a performance of the stature of Hopkins' in The Father doesn't come along often. Let's cherish it while we can.