Anti-protest bill passes in Florida Senate on party lines, even after emotional testimony from Black lawmakers

With critics warning that the bill would chill free speech and have a disparately negative impact on Black people, a key Senate committee last Friday approved a controversial measure that Republicans argue is needed to crack down on "violent" protests.

Members of the Senate Appropriations Committee spent nine hours picking apart the bill (HB 1), which would create a new crime of "mob intimidation" and enhance penalties on existing riot-related offenses. The proposal is a top priority of Gov. Ron DeSantis, who last year rolled out a framework for the measure in the aftermath of nationwide protests spurred by the death of George Floyd, a Black man who died when former Minneapolis police officer Derek Chauvin, who is white, knelt on his neck for more than eight minutes.

The legislation's designation as HB 1 — and the Senate's unusual move of having just one committee vet it — illustrates the proposal's significance to House and Senate Republican leaders, as well as to the governor. The Appropriations Committee's 11-9 vote sent the bill to the Senate floor. The vote was along almost straight party lines, with only Sen. Jeff Brandes, R-St. Petersburg, crossing over to vote against it.

During emotionally charged debate, Black senators talked about their experiences with racism. 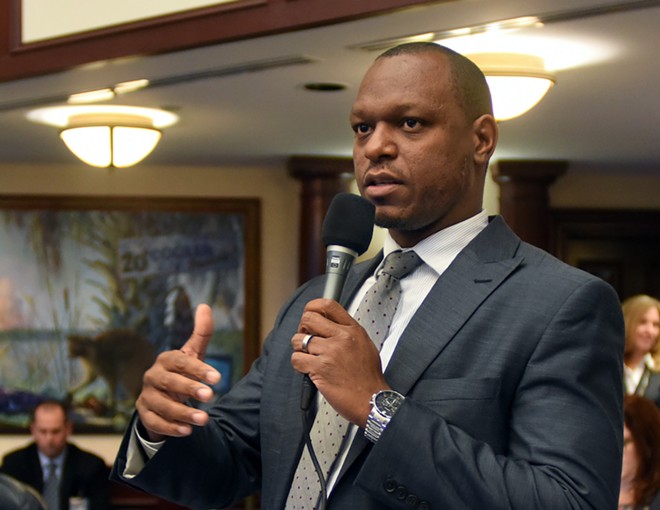 Sen. Darryl Rouson, D-St. Petersburg, said he remembered "my daddy being an officer in the local branch of the NAACP" during the civil rights movement. Rouson noted "the irony" that Friday's debate came as Chauvin's trial for the murder of Floyd is taking place.

"The purpose for protesting is to bring about real change, to disrupt the status quo, to bring attention, awareness, to bring the light of equity to darkness and injustice, to motivate movement from standards of discrimination that interrupt fairness and cause an eruption of justice," Rouson, also a former local NAACP president, said.

Democrats spent four hours questioning bill sponsor Danny Burgess, a Zephyrhills Republican who acknowledged that the proposal, if signed into law as expected, could have some unintended consequences.

Burgess said the measure would "tighten up" existing laws, as well as create new crimes related to protests that become violent.

"The reality is a lot of what we have here is already law. We're just making that a lot more clear, more defined, more readily available for both the public and law enforcement to understand what our intent is as a legislature and to seek to better address what's already been on the books," he said.

But Sen. Bobby Powell, a West Palm Beach Democrat who is Black, said that the intent of legislation and the application "don't always work together."

"Is there a way to make sure this is not misapplied?" Powell said.

"As much as I like to think that racism is a thing of the past, I'm not naive. So I don't know," Burgess said.

The bill, passed in a party-line vote by the House last month, proposes a host of changes to criminal and civil laws. The new crime of "mob intimidation" would make it unlawful "for a person, assembled with two or more other persons and acting with a common intent, to use force or threaten to use imminent force, to compel or induce, or attempt to compel or induce, another person to do or refrain from doing any act or to assume, abandon, or maintain a particular viewpoint against his or her will."

"What does it mean to compel or induce?" Farmer, D-Lighthouse Point, asked Burgess. "We senators take great pride in our ability to persuade and, yes, compel someone to change their mind on an issue. This language is just so broadly worded, so undefined and so potentially harmful to the right of free speech that you could have peaceful protesters prosecuted while someone near them, but maybe not necessarily associated with them, breaks the law."

Burgess, however, rejected Democrats' arguments that the proposal is aimed at quashing protests.

"I believe that we are absolutely protecting the right to peaceful protest," Burgess, a military veteran and lawyer, said. "I would lay down my life for that right."

Burgess argued that crimes laid out in the bill would be hard for prosecutors to prove, but Democrats were unconvinced.

"I appreciate your intention, but what I believe is the reality of this bill will be much different than your intention. Black and brown people are treated differently than others from law enforcement," said Sen. Randolph Bracy, an Ocoee Democrat who is Black. "If a person does not believe that, then they're in denial. I think we have to realize what this bill will do."

Democrats also raised concerns that peaceful protesters could be accused of crimes even if they do not participate in violent behavior.

"It happens today. It's unfortunate. But, you know, it's not unique to the creation of this bill," Burgess acknowledged. "It's awful. It's not what this bill's addressing."

"The bill itself is really an attempt to suppress the oppressed, because the idea is not to have anyone march at all or protest at all or let their government know that they are in a situation in their communities that can be fixed," Gibson said. 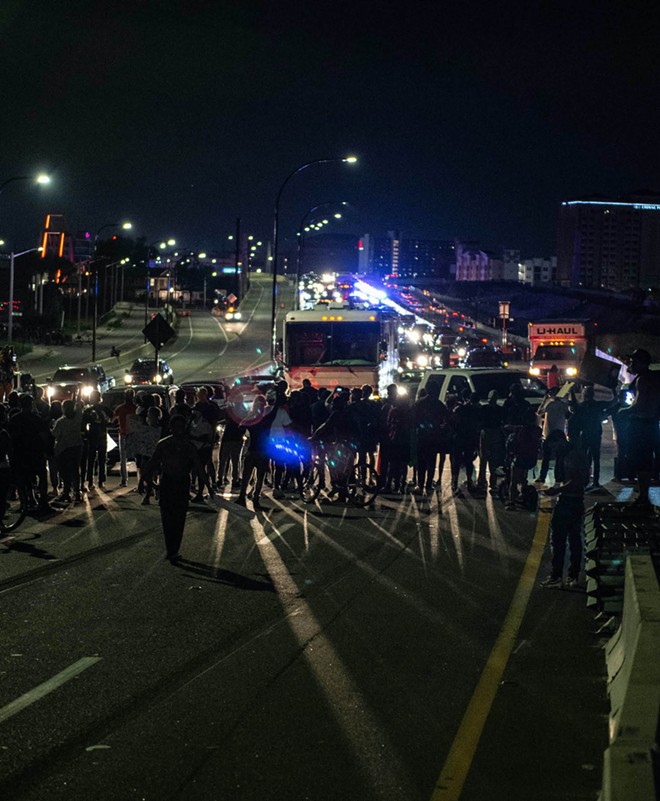 The bill also addresses the destruction of "memorials," an issue that has drawn heavy attention after statues of people associated with slavery were torn down or destroyed following Floyd's death.

The bill would create a new felony crime that would prohibit people from defacing, damaging, destroying or pulling down memorials or historic property if the damage is more than $200. The bill would require people convicted of the crimes to pay for restoration or replacement of the property.

The measure also would create a new felony crime of "aggravated rioting" that carries a sentence of up to 15 years in prison.

House and Senate legislative leaders released the proposal on Jan. 6, hours after supporters of former President Donald Trump stormed the U.S. Capitol in a failed attempt to prevent certification of states' election results in Trump's loss to President Joe Biden.

The Senate committee on Friday heard from dozens of religious leaders, students and activists — many of them Black — who urged legislators to vote down on the measure.

Opponents argued that the restrictions in the bill were antithetical to the nation's foundations and smacked of Jim Crow-era measures that treated Black people differently than white people.