New film by Nicolas Jarecki has lots of guilt and money, but lacks danger and guile 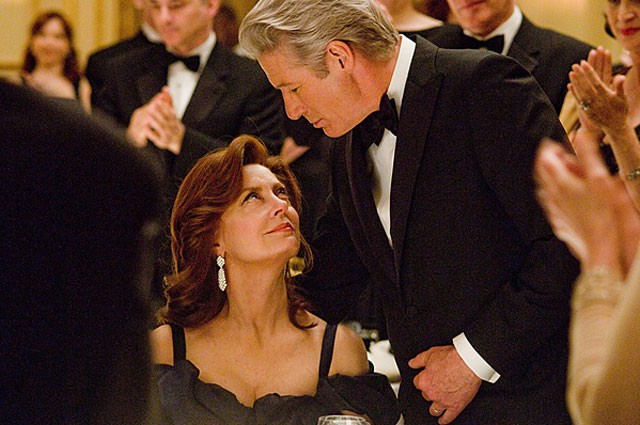 Nicolas Jarecki's Arbitrage is not necessarily a bad movie; it just doesn't seem to have much of a purpose or a point, and that's troubling. If it's a thriller, it's not thrilling enough. If it's about a modern god being destroyed by his flaws and indiscretions, then they simply do not run deep enough.

The god of the piece, billionaire fund manager Robert Miller (Richard Gere), has it good, but never seems to quite have the world by the balls like his real and fictional counterparts usually do. He has the jet and the townhouse, the lackeys (Chris Eigeman) and lawyers (Stuart Margolin), and the woman on the side, Julie (Laetitia Casta). But there is something missing. It seems he's missing an edge – in his dramatic aura, there is a lesser order of danger and guile.

Still, Miller makes it work, building his fortune, funding his wife Ellen's (Susan Sarandon) philanthropy mission and bringing his daughter Brooke (Brit Marling) along in the family business. The financial crisis has left him seemingly unscathed, or that's what he tries to sell with his image. In truth, his fund is $400 million in the hole and he's trying to sell as fast as possible before anyone notices. It's complicated all the more when, driving upstate in the middle of the night with Julie, he dozes off and flips the car over, killing her. In that moment, he sees his world fall apart, scorched to ash by the licking flames of the burning car. Like any other rich, powerful man who wrecks his car while a girl he shouldn't be with is his passenger, he runs.

In his running, we don't even get running – we get cautious evasion. There is no psychological component to the film, just guilt and money. Jarecki is content to skip along the film's surface, rending drama out of the legal trouble Miller causes for Jimmy (Nate Parker), the kid who picked him up that night. Jimmy is grilled at every turn by the overzealous Detective Bryer (Tim Roth) who wants nothing more than to nail a rich crook to the wall.

It feels like Gere's involvement, like Robert Redford or Warren Beatty, sort of precludes the character from being too bad a guy. He's bad, but there are extenuating circumstances, so he's not really that bad. He may have done these horrible things, but deep down he's a nice guy. Holding Robert Miller up to the likes of Gordon Gekko (Michael Douglas in Wall Street) or Judah Rosenthal (Martin Landau in Crimes and Misdemeanors), we find that very little ends up being at stake. $400 million is a sizable crater in someone's personal economy, no doubt, but then I think back to an interview with Ivanka Trump from Jamie Johnson's Born Rich, where her father points to a homeless man and tells her, "He's worth $2 billion more than me right now." Miller, on the other hand, never reaches the edge of the map in terms of his woes or triumphs. He simply evades and bargains. It's tough to say what audiences are supposed to do with that.