Standbys are stellar, but pizza pies keep the hordes satiated at this trendy trattoria 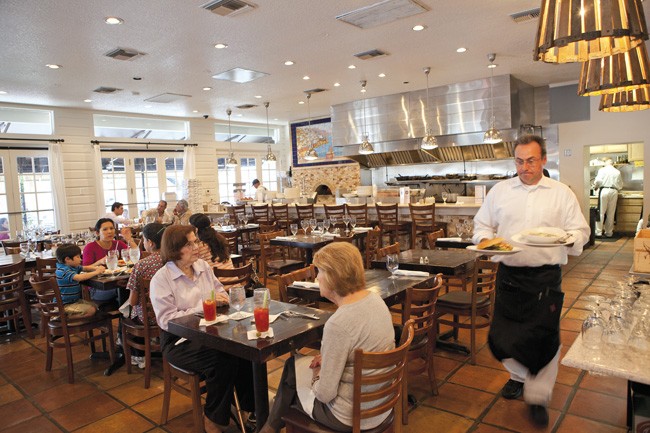 Nearly 2,200 years after Hannibal’s death, the Roman Empire is still sticking it to that once-great Carthaginian general, this time in the person of Armando Martorelli. The suave Italian’s imposing new restaurant has become the most popular destination in a square named after the military strategist, warrior and sworn enemy of Rome, yet Hannibal’s grave-rolling would likely cease if he tried but a slice of Armando’s San Giovanni pizza ($14.95). The pie, as rustic a one as you’d find in Napoli, is fired in a custom-built brick oven, yielding a wonderfully blistered crust atop which lie sautéed mushrooms, shaved mozzarella and truffle oil; the center is emblazoned with fried eggs. It’s no wonder this whitewashed funhouse is so packed that reservations are an absolute must.

Approaching the former (and now unrecognizable) Hot Olives site on a cool Saturday night, we could hear cackles of laughter and clinking of cocktails – the general rumbling of patiently waiting patrons. It seemed that more than a few patio diners had ventured inside because of the chill, resulting in inordinately long waits for tables. So as we stepped under the covered awning in time for our 8:30 p.m. reservation, we were told we’d have to wait 40 minutes for a table – that is, unless we wanted to sit outside. We did. Warming to the strains of “Chan Chan” coming from the band playing at Mi Tomatina next door, we all agreed that taking a seat on the patio was to be preferred to the cacophonous scene inside.

Our palates pranced to the flow of pinot grigios and super-Tuscans, and our torsos swayed to the Latin rhythms next door, but all movement was confined to our hands and mouths once the above-described pizza and a carpaccio di carne ($12.95) arrived. Unburdened by a forest of arugula, the thinly sliced beef came alive with shaved Parmesan and pear slices that made it sing. The simple presentation of lobster ravioli ($19.95) – served with mussels, clams and calamari and finished in a light white-wine garlic sauce with cherry tomatoes – is precisely what made the dish so noteworthy. A focus on simplicity allowed the rigatoni della cara ($16.95), permeated with eggplant essence, to shine as well. On this chilly eve, the tubular shells and ragù-like sauce proved especially comforting. Pollo scarpariello ($16.95) – another white-wine-sauced secondi – underscored the cucina’s less-is-more approach. Chicken breast, pancetta and mushrooms tossed in spaghetti qualified as boring to some, but charmingly unaffected to others.

Of the three house-made dolci available to us, a light, fluffy tiramisu ($6.95) elicited sneers. It didn’t seem the ladyfingers had been dipped in espresso at all. I considered pouring my doppio over the cake for an affogato-style ending, but ultimately decided against it. It’s not berry season, so I couldn’t really complain about the three blackberries atop the panna cotta ($6.95), but would a citrus sauce with navel oranges be too much to ask? Or a chocolate sauce?

In an attractive, stylish and crowd-pleasing restaurant, it’s always disappointing when servers appear less than seasoned. Perfunctory from the floor to the hostess stand, service met all minimum requirements, but there’s certainly a lot of room for improvement here. Should it deter you from paying the restaurant a visit? Absolutely not. Here on Hannibal Square, there’s no shame in surrendering to Armando’s.