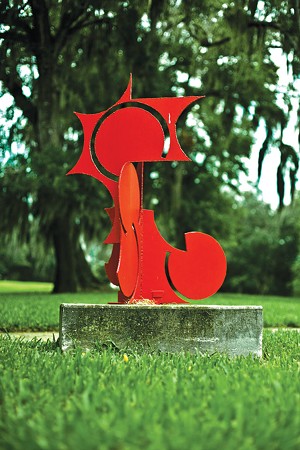 Best public art that doubles as a weapon

If you've ever thought of an "ice knife" as the perfect murder weapon (it melts! No fingerprints!), then here's a treat for your sick little mind: a public art piece so close to the ground and so incredibly pointy that thoughts of pushing a frenemy onto it are unavoidable. The work is Paul Marco's 1989 sculpture "Symphony," and it's near an intersection of two busy sidewalks in the outdoor sculpture garden of the Mennello Museum of American Art. Visitors who can contain their murderous rage long enough to gaze upon its five protruding tips will notice its resemblance to a ninja throwing star. The sculpture, made of roughly welded steel, earns bonus points for being painted red … all the better for hiding bloodstains.

There Will Be Words
Second Tuesday of each month
Urban ReThink
625 E. Central Blvd.
therewillbewords.com

If you ever wonder what the expressive people around you generally think in private, each second Tuesday of the month, four handpicked writers take to the makeshift stage at Thornton Park's Urban ReThink to read you 10 minutes of their literate intimates, stories that are compiled for the event in cute little chapter books. An outgrowth of the burgeoning Burrow Press imprint, and hosted by writer and poet J. Bradley, There Will Be Words doesn't take itself too seriously – it once allowed Orlando Weekly's own Billy Manes to make an ass of himself with some college scribblings about anger – but it is just serious enough to allow you to feel like something smart can happen (in that soft-spoken NPR way) in Orlando. You just have to look for it.

As part of their fall 2011 season, CFAM presented an intriguing little exhibition that comprised much more than the sum of its parts. A cursory glance at the hallway display would reveal only a small bronze statue of a Japanese boy and a vitrine full of old letters and newspaper clippings, telling the story of how the bronze figure was donated to the college by an alum after World War II and later repatriated to Okinawa, from whence it came. In fact, Contested Object took on major issues of cultural dominion, the meaning of ownership and the changing tides of acceptable racism with bravery and unflinching self-examination. Kudos to Rollins anthropology student Cory Baden and art history professor Susan Libby for their rigorous research, to college president emerita Rita Bornstein for being willing to consider that the college may have done "wrong" in the past, and to curator Jonathan Walz and his staff for always nudging CFAM's offerings in challenging and modern directions.

Each spring, a new crop of plein air painters pops up on street corners all over Winter Park. They capture the scenes around them in oils, pastels and watercolors for a week, and as they finish their works, they're hung in the Albin Polasek Museum gallery. All week long you can check back in at the Polasek as the gallery fills up with new paintings, all of which are available for purchase once the show is over.

Theater history is filled with famous teams: Comden & Green, Lerner & Loewe, Rosencrantz & Guildenstern. In 2012, the buddy buzz was all about the new duo directing our area's longest-running international theater festival. Orlando's own arts administration answer to Abbott & Costello – new Fringe Festival producer Michael Marinaccio and returning general manager George Wallace – turned out to be a terrific twosome in their first festival together. After receiving rave reviews for maximizing attendance while minimizing angst, we hope to see this double act treading the boards for seasons to come.

Performing in one Fringe production is exhausting enough, but each year a handful of hardy souls appear in multiple shows. Our nod for "hardest-working actress of Fringe 2012" goes to Sarah Lockard, who featured in three different shows – Skill Focus: Burlesque, Cannibal! The Musical and Connected: An Interactive Experience – at three separate venues. (And for bonus points, she showed her boobs in two out of the three!) Lockard appeared onstage in a total of 21 performances over 13 days, which is more shows than all but the hardest-core Fringers even attend.

Orlando's peripatetic Titanic exhibit has had nearly as fraught a history as its historic namesake, bouncing from the now-bulldozed Mercado to the Orlando Science Center before settling back on International Drive. Just in time for the original tragedy's 100th anniversary, the museum-style attraction received its best addition ever: dozens of authentic artifacts recovered from the shipwreck itself, including an impressive slab of its twisted steel hull. An auction of the exhibit owner's assets planned for April was put on hold, but you should try to see these fascinating fragments while they're still around.

Best bettering of Broadway without a budget

Usually, when a recent Broadway hit is staged by a local theater company, the best compliment we can give is something along the lines

of "They did a great job, considering we're in Orlando." A happy exception was Howlers Theater's no-holds-barred take on Martin McDonagh's crime comedy A Behanding in Spokane. On a shoebox-sized stage and with scarcely any set, director Jeremy Wood exceeded the impact of the well-financed New York production in nearly every respect, and his actors (Scott Browning, Jamie-Lyn Markos, Aaron Smalls, Tony Demil) put their overpaid movie-star counterparts to shame.

VarieTease at Say It Loud!

Baby Blue Star's VarieTease, the burlesque-meets-circus blend that's blown audiences' minds beginning with the hit show Carnivale, is one of Orlando's hottest acts, but the troupe has long sought a permanent home base (Julio Lima's safety-orange Say It Loud studio was its most recent stop). But now we hear Blue's finally got a place of her own! VarieTease will be titillating audiences at the Venue, a deceptively woodsy-looking studio on Virginia Drive, starting this fall – another step toward making Ivanhoe Village an active arts destination.

Local colleges, personalities and businesses alike came together last year for the making of Renee, the story of local nonprofit To Write Love On Her Arms. The movie starred 2 Broke Girls' Kat Dennings, but at the film's premiere on opening night of this year's Florida Film Festival, we were captivated by a far brighter star: us! Like all great cameos – Christopher Walken in Pulp Fiction, Brad Pitt in Full Frontal – it was a blink-and-you-missed-it kind of greatness, but there we were, a shiny red box full of papers in an otherwise despairing, colorless world, proudly staking our cinematic claim with only a name: Orlando Woodley?!?! OK, so they didn't want us to sue them or something, but we're still SO ready for our close-up.

There's one cardinal rule in the fine arts: Whenever you're worried about your product, fill it up with the innocent expressions of children. That way you have a captive audience of glowing parents and the public relations appearance of being inclusive. As we all sit on our hands waiting to see just how this whole DPAC thing plays out (will it ever include the acoustic hall it was sold to the public upon?), the folks running the show have wisely – and predictably – wrapped the fence surrounding the construction site with child-drawn stick figures and words like "poetry" as a sort of glossing-over of the fact that, at least initially, the venue will basically be a touring hall for Broadway shows and Tom Jones concerts. Well, at least the kids can dream!

Within the last year, a barrage of pasties and fishnets has given some of our favorite dimly lit nightspots a hefty dose of glittery pizzazz. A handful of scantily clad burlesque troupes work it in places like Taste, the Stardust Lounge and Bombshell's Tavern, and some, like Skill Focus: Burlesque, take it to new levels. We've seen those women decked out in elaborate costumes that appeal to a pretty wide variety of fan fetishes – superheroes, comic-book characters, pirates and even Star Trek characters.

Satchmo at the Waldorf
satchmoatthewaldorf.com

Wall Street Journal theater critic Terry Teachout, scholar-in-residence at the Winter Park Institute at Rollins College, had long wanted to write a play about Louis Armstrong: about the disconnect between the private, complicated man and his grinning public image. Local theatrical éminences grises Rus Blackwell and Dennis Neal, both founding members of the Mad Cow Theatre company, had long wanted to collaborate on a one-man play. After a 45-minute staged reading, before which Teachout had no intention of producing the play in Orlando, Neal and Blackwell knew this was the play – and Teachout knew that he'd found the director and actor to bring his first play to life. The play has since been produced in New Haven, Conn., Lenox, Mass., and Martha's Vineyard, Mass., but it all started here.

Sometimes artists have a tendency to focus on the bright-lights big cities, to get obsessed with what's happening in New York and Paris and Tokyo to the exclusion of their own backyards. But the best never forget their roots. With that in mind, local publisher and litblog Burrow Press commissioned 15 short stories about the city for their 15 Views of Orlando anthology; the end result is wonderfully strange, beautifully written, instantly familiar to residents and totally alien to any theme-park tourist or casual conventioneer.