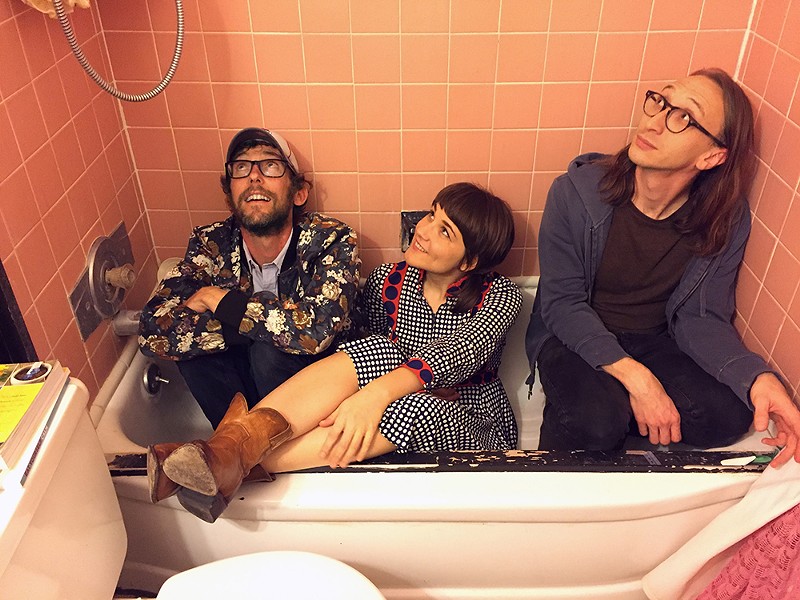 Moon Jelly are the dreamgaze art-pop band that Orlando has always deserved. The trio of Steven Head (guitar, electronics), Anna Wallace (vocals, electronics) and Timothy Murray (bass, electronics) craft hypnotic audio and visual phantasmagoria that fits in with the tastes of both the indie and avant-noise crowds.

They've shared the stage with the likes of Silver Apples and Sun Araw, but now they've put together a show that aims to showcase "three distinct electronic narratives" in Florida music. To that end, they're playing the Spacebar alongside Gainesville's Krishna synthpop duo Time and Orlando's death-dealers Autarx on Sunday. All three members of Moon Jelly fielded questions from Orlando Weekly in advance of that show.

Orlando Weekly: How did Moon Jelly come together?

Timothy Murray: Anna was harnessing her style of bedroom pop and I had just joined Telethon to play bass, so Anna and I decided to put our skills together and start a project. Brian Esser (Yip Yip) saw us performing at an art show we helped put on called Parallelogram at the Acre. We recorded an album that was released by a San Diego label called Bleeding Gold and toured to support it.

For the tour we added Steven Head (Dark Sea of Awareness) and Ark Calkins (Alias Punch), who I had been playing with in a cellphone band called Zenas Fisk. Brian and Arkie have since moved away from Orlando, so now it's just the three of us.

What bands or artists were inspiring you as embryonic Moon Jelly was developing?

Anna Wallace: I feel like even beyond music, the artist Yayoi Kusama is probably my biggest influence. I would say in the musical realm that I gravitate toward '60s psychedelia and pop like Brian Wilson and the Free Design. I also draw a lot of influence from early electronic music like the BBC Radiophonic Workshop and krautrock like Harmonia.

How do you approach live work vs. composition? You're a very visual band live.

Steven Head: Currently there is very little difference. We try to make our live performances as expansive as we would like our final recordings to sound. We have several mood lamps no matter the occasion.

How does living in Orlando influence your sound or creative choices?

SH: The community has definitely fostered Moon Jelly's success and given us opportunities we may not have had in another city. However, we have all definitely paid our dues. From Anna's artistic endeavors with Parallelogram, Tim's Pedal Challenge stunts to my DIY-focused time at Tiny Waves, we have definitely been participants in the scene.

TM: There are so many opportunities for a variety of musicians to do their thing here. Everyone from Uncle Lou to Will Walker has opened their doors to us. Chris Belt's Accidental Music Festival is another example of Orlando really expanding their musical horizons. I would be lying if I didn't also admit that I'm really into the old Epcot Center ride theme songs.

AW: Pat Greene has definitely afforded a wonderful outlet for more experimental-leaning musicians with the In Between Series at Avalon Gallery. Civic Minded 5 always has something unexpected up their sleeves, and it doesn't hurt to have a great college radio station like 91.5.

You've put thought into thematic unity for the May 29 show – what led you to choose Autarx and Time?

TM: We played with Michael Collins of Time two years ago at Uncle Lou's and were blown away. We saw recently that Michael had this new project Time and immediately knew we wanted to set up a show.

AW: Michael Collins with Time is making his own blend of Hare Krishna disco. It's Scott Walker channeling Giorgio Moroder.

This is our Summer Guide issue; what shows are you most looking forward to this summer?

TM: Lush Agave at the In Between series.